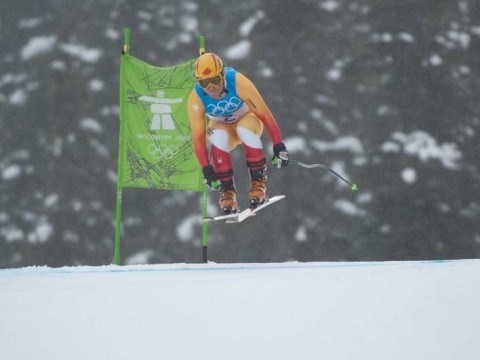 A weather forecast that calls for new snow and rising freezing levels may be a blessing for American downhill racer Lindsey Vonn and the entire Canadian men's downhill team.

The men completed an official training run on the Dave Murray Downhill Thursday. They only need one training run prior to Saturday's scheduled downhill, the opening event of the 2010 Winter Olympics.

Austrian Michael Walchhofer had the fastest time on a soft, shortened course, one minute 34.46 seconds. He was followed by Whistler's Robbie Dixon in 1:34.55 and Erik Guay of Mont Tremblant in 1:34.68. Whistler's Manuel Osborne-Paradis was 22 nd in 1:35.91

Switzerland's Didier Cuche, who set the fastest time in Wednesday's training run before fog rolled in and kept half the racers off the course, had the fastest time again Thursday but was disqualified for missing a gate.

Both the men and women were scheduled to take downhill training runs Thursday and with the two courses converging just above the finish the men ended their training run a few hundred metres short of the finish area.

While the men now have an official training run the women's training run was cancelled after two racers due to poor visibility and heavy snow. The second racer, American Stacey Cook, crashed into safety netting and was airlifted off the course as a precaution.

The cancellation of the women's training run was welcomed by Vonn. The overall World Cup leader is suffering from a deep shin bruise that requires time to heal. The cancellation of Thursday's training run earned her at least one more day's rest, but she may have a few more. The forecast is for more snow and rising freezing levels overnight and through Friday. Saturday's forecast is for periods of snow and windy, with freezing levels at 1,500 metres, which is above midstation on Whistler Mountain's Creekside.

The women's super combined event, which includes a downhill and a slalom, is scheduled for Sunday.

The forecast doesn't improve until Monday, when a mix of sun and cloud are predicted. There are no alpine events scheduled for Monday.