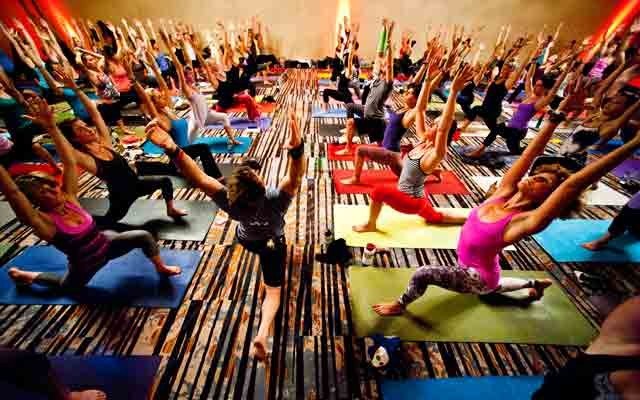 Open up Wanderlust blends old and new in a celebration of yoga. Photo by Ali Kaukus/Courtesy of Wanderlust

Not so long ago yoga was thought of as a practice performed by the highly trained and highly motivated.

But in the last several years it has quietly, but with intention, become part of the everyday life of millions of people from Whistler, to Africa and beyond.

This weekend sees the now annual hosting of the Wanderlust festival in Whistler, which melds old and new in celebrating yoga — and event not just good for the soul of the resort but also the bottom-line. Last year festival organizers report that there were around 1,500 yogis in attendance per day, plus thousands of music fans on top of that, and this year they're expecting at least a 30 per cent growth in those figures.

To those committed to the practice the growth of the love of yoga makes perfect sense in today's world.

"Old school yoga was very esoteric. Ten to 20 years ago it was a serious and demanding practice, which often meant a lot of sacrifices," said Sean Hoess, co-founder of the Wanderlust Festival. "Now it reflects modern life. People still want to have a good time, but lead healthier and longer lives."

The most recent numbers from Statistics Canada (2005) show that 1.4 million Canadians practice yoga — and you can bet the numbers are much higher today. With businesses like Vancouver's Lululemon raking in an impressive $1 billion worldwide in 2012 it's certainly big business. But it is much more than that as well.

"Yoga is the perfect intersecting point," said Hoess. "There's the health and wellness element assisting with physical conditioning, and then there's the calming and spiritual fulfillment aspect."

With Hoess's Wanderlust Festival bending and stretching it's way to Whistler August 1-4 the new schedule reflects these intersecting elements.

"We started out with yoga, meditation and music but we realized there was a demand for more," he said.

"This year we've incorporated dance, hiking, biking, speakers, writers and, of course, some food and wine."

When people visit places like Whistler they don't want to spend all their time in a downward-facing dog, said Hoess. This realization has lead to some innovative events that are already sold out, such as the "Stride With Nature" hike and the stand up paddleboard yoga sessions on the lake. "Wanderlust meets a demand that was already there," said Hoess. "We are simply tapping into it."

The festival has doubled in size each year from when it began in Squaw Valley, California in 2009. That's no surprise to Melanie Koenderman, dean of students at Squamish's Quest University and a registered yoga instructor.

"Our daily lives are hyper-stimulated — our phones, computers and television are inundating us with information," she said.

"We often find that responsibilities and expectations crowd our day-to-day, so it's hard to stay focused and composed when we are bombarded with so much.

"Breathing is one of the fundamental parts of yoga practice. Regulating our breath activates our parasympathetic nervous system, which is our resting response. This is why people tend to feel calmer and more focused after a yoga session."

This belief in the power of yoga to help people feel more at peace has led Koenderman to teach free yoga classes, alongside student instructors, as she believes it helps relieve stress and anxiety.

"Students have both academic and personal stress and we wanted to provide an outlet for them to come and relax," she said.

"Yoga teaches us to be in the moment and makes us think about how our bodies feel. The feedback we get is always positive."

It's been proven that yoga helps to boost feel-good brain chemicals like serotonin and dopamine, which also make us feel relaxed and content. Going even further a study conducted at the University of Illinois by professor of kinesiology Neha Gothe found that it helped to increase accuracy and speed.

In an age where everyone is looking to work, and workout smarter rather than harder, yoga certainly seems to be ticking all the boxes. There are obviously some major physical benefits too.

Said Marc Rizzardo, a clinical assistant professor in the Department of Physical Therapy at the University of B.C.: "Yoga is an... enjoyable way to keep fit that's not stressful on the joints and doesn't involve any expensive equipment."

He believes this is one of the key factors in the rise in yoga's popularity.

"I deal with a lot of inflexible athletes and it's one way to help them strengthen their bodies and at the same time give them an awareness of their body in space," said Rizzardo.

The increasing attendance at events like Wanderlust proves that yoga is not going away anytime soon. "People may have been dismissive at first, or seen yoga as a fad that would fade away, but the numbers just keep increasing," says Koenderman. "Yoga is even coming out of the studio and into schools, universities, physio clinics and being prescribed by doctors. This demonstrates its impact, and how it's becoming a foundational part of our current culture."

For those looking to get a taste of Wanderlust, without committing too much time or money there are some free events at the Olympic Plaza (re-named "The Greatest Place" on the Wanderlust Schedule).

A combination of yoga and meditation, this "all levels" event is designed to revitalize and energize.

A spiritually centered vinyasa flow yoga session for all levels designed to be uplifting and inspiring.

What's Not Yoga at Wanderlust?

Farm to Table Dinner — Working with local producers and chefs this is a dinner with a view hosted up on the mountain at the Roundhouse Lodge.

Dance Workshops — There are three dance workshops being offered by the dancers and choreographer of Quixotic.

Personalized Haiku — Look out for Erick Szentmiklosy and Daniel Zaltsman of "Poetry at Parties" who will be writing haiku poems on the spot.

Soulful Cinema — A series of programming explores spirituality both on and off the mat. Screenings are open to yoga and music ticket holders for free.

Speakeasy Lecture Series — These intimate conversations focus on subjects pertaining to "the mindful life" and include prominent yoga teachers, industry leaders and authors.