WASP at capacity, looking to expand 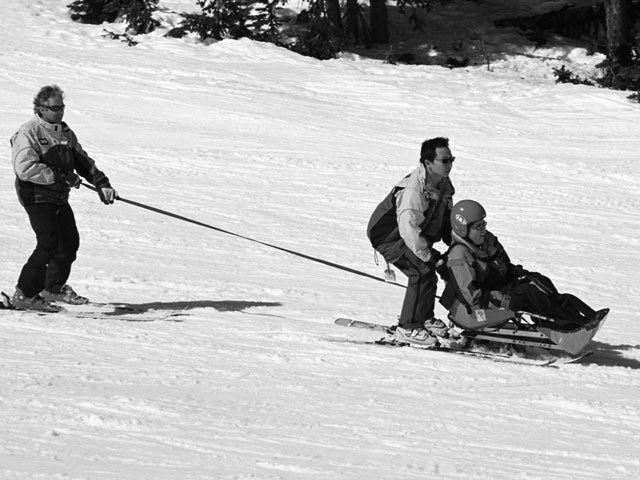 Snow Sliding The Whistler Adaptive Sports Program is looking to expand in the coming years as lessons book to capacity this season. Photo by coastphoto.com.

The Whistler Adaptive Sports Program (WASP) is already working at capacity this winter with the number of bookings and lessons up, programs full, and more awareness of what recreational opportunities are available in Whistler for people with disabilities or special needs.

According to Chelsey Walker, executive director of WASP, the number of people taking lessons through the Ski and Scotiabank Learn to Ride Program is up 90 per cent this season, compared to last year. Volunteer and paid instructors also taught 304 adaptive ski and snowboard lessons up to Jan. 6, compared to 136 by Jan. 6, 2007 — an increase of 125 per cent.

And while the resort was busier in general for the holiday season, WASP is also seeing a 50 per cent increase in pre-bookings through the end of winter.

“It’s been absolutely unbelievable,” said Walker. “We’re actually at capacity for our programs, and now our job is to increase our funding so we can increase that capacity for the future.

“Our projected increase of 35 per cent more ski and snowboard lessons was completely blown out of the water.”

Although WASP programs are at capacity, so far the organization has been able to keep up with the demand.

“I don’t know of anyone who has been turned away,” said Walker. “We do run a waitlist, but generally we try to accommodate people as best as possible. It also helps that most people who enroll in our programs book well ahead of time. It’s not often that someone shows up and books a lesson without contacting us first, although that does happen.”

Currently WASP is looking to raise funding to expand its equipment centre at Olympic Station on Whistler Mountain, to house their growing collection of skis, adapted snowboards, harnesses, radios, and other gear used to assist people with disabilities that are learning or need support on the slopes.

Whistler-Blackcomb does have paid instructors in its ski and snowboard school for people booking lessons and guides, but for the most part WASP instructors are mainly volunteers. Currently WASP has more than 140 active volunteers for all of its programs, including at least 85 volunteer alpine skiing and snowboarding instructors and coaches.

Whistler-Blackcomb now has five of its own paid instructors who work full time providing lessons to people with disabilities, up from three instructors last year.

The emphasis is on keeping the programs affordable and in reach of as many people as possible, says Walker, although some clients and returning visitors do pay for lessons and guides.

WASP has also become more active with cross-country skiing recently, and especially this winter with the opening of the Whistler Olympic Park and the Paralympic trails for racing and biathlon. Three national level athletes have moved to the area to be closer to the facilities, and two more are arriving this month.

However, it’s not all high performance. Interest in the Paralympic Games is prompting other disabled individuals to give cross-country skiing a try. It has also made funding available to buy equipment and train coaches for WASP. WASP was given a grant from the Hamber Foundation and Cross Country Canada to help purchase more equipment, including sit skis and radios for visually impaired skiers.

Word is also getting out about WASP and the programs they offer, and there are links to the program on websites belonging to Tourism Whistler, the Resort Municipality of Whistler, and Whistler-Blackcomb, as well as the Whistler for the Disabled website at www.whistlerforthedisabled.com.

Currently, WASP has only a handful of Nordic skiing coaches, but has added two additional coaches for this year to handle the load and will host a coaching course at the end of January to train more volunteers.

At the end of the month, WASP also plans to host a Twoonie Race with the Whistler Nordics. The format is still being decided, but it will most likely include an opportunity for able-bodied cross-country skiers to try Para-Nordic equipment and see how physically challenging it can be.

In addition to providing lessons and assistance to recreational alpine and Nordic skiers, this is also the second year for WASP’s alpine racing program. The program was created last year for club level athletes that need coaching and competitive opportunities to advance to the provincial and national teams.

WASP will once again host a race in April, during the Telus World Ski and Snowboard Festival, to showcase the athletes enrolled in the program and give them a chance to race against members of the B.C. Para-Alpine team and possibly the national team as well.

WASP relies heavily on current sponsors like Scotiabank, the Rotary Club, Whistler-Blackcomb and the Whistler-Blackcomb Foundation, the Resort Municipality of Whistler through the Community Enrichment Grant program, and others. Recently Telus also came on as a sponsor, responding to a request for $5,000 with a cheque for $14,600.

With the Paralympics around the corner, Walker expects the demand for WASP services to increase. Keeping up with the growing demand means finding new sources of funding.

“Every time we expand a little bit we need to expand our funding to keep up, and so far we’ve grown a little every year,” said Walker. “With the Paralympics coming there are more opportunities then ever before to get funding, to get equipment. The great thing is that the more recreational opportunities we offer, the more people that come to us.”