Waste not, want not

Whistler Waldorf student commits to one year of zero waste
Jan 11, 2019 8:00 AM By: Braden Dupuis 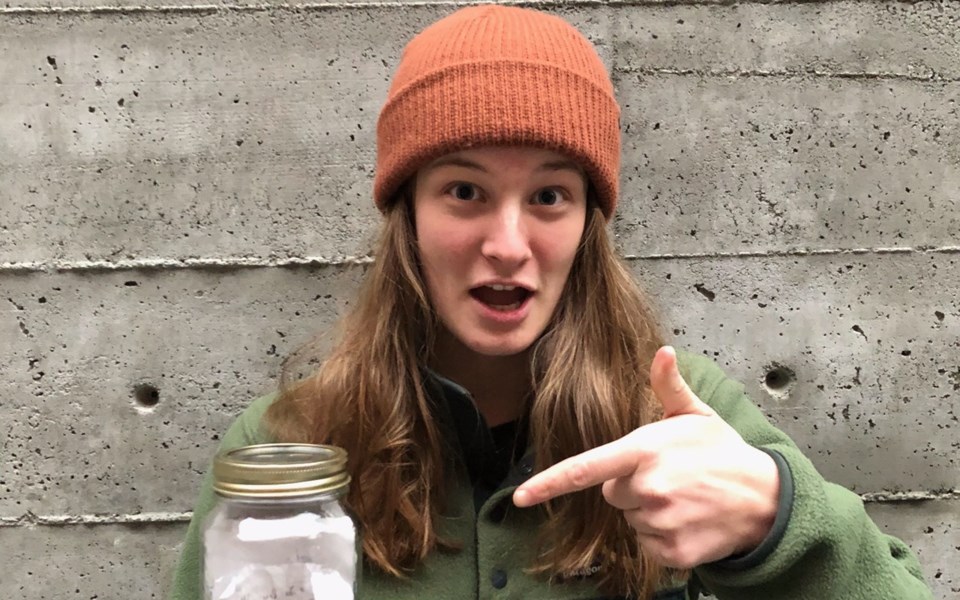 jar jamming For the next year, Irie Smith has committed to tracking all of the waste she creates in a mason jar. photo submitted

"It said, 'reducing 70 per cent or something of our waste going to landfill,' and I thought that was so cool," Smith recalled.

But on her ride down, Smith noticed something else—a garbage bag tucked underneath an on-mountain restaurant.

"I had wondered if that's how they were reducing their waste, and I wanted to look more into reducing waste and how easy or how hard or how much of an impact it has on pollution," Smith said.

The 17-year-old Whistler Waldorf student parlayed her curiosity into her Grade 12 project, which will see her commit to going zero waste for an entire year.

Since Oct. 1, Smith has been keeping all of her waste—anything that can't be recycled or composted—in a 500-millilitre mason jar.

"The first month was especially hard, especially going grocery shopping. I was like 'Oh lord, I am not going to have most of my favourite treats anymore,'" Smith said with a laugh.

"Receipts is a big one, because most places have to print two receipts, and if you don't take it then it just goes in the garbage, so I take those most of the time."

After two months, Smith said her jar was almost half full already—mostly with receipts, Band-Aids, and stickers from fruit—but she's already starting to get a handle on the waste she creates.

"It's getting easier now," she said. "I've gotten the hang of it. I can go three or four weeks without putting anything in, but it was mostly just from that first month."

The experience has been an eye-opener for Smith as well.

"Anything in the bathroom was kind of a big one—toothpaste, toothbrushes, shampoo, conditioner—everything," she said.

"It doesn't sound like a big deal, but the first time I did a zero-waste shower, even, I was like, 'Holy cow, this is weird.'"

Making the shift to zero waste is not easy, but Smith likens it to breaking any other bad habit.

"The first couple weeks or days it's just bringing awareness to what you're actually doing ... for me it was not an easy shift to make, but in my head it made sense, because of how much I cared about the environment," she said.

"I think as long as you're motivated and you really want to do it, it's just lifestyle changes, really."

Her zero-waste goal has already inspired her family to do more composting—Smith estimates the family's garbage has decreased by 50 per cent.

And while she's only committed to one year of zero waste for her project, the revelations uncovered in her first two months are more than enough to keep Smith motivated.

"After doing the full year, I don't know how I could go back to buying everything I did buy."