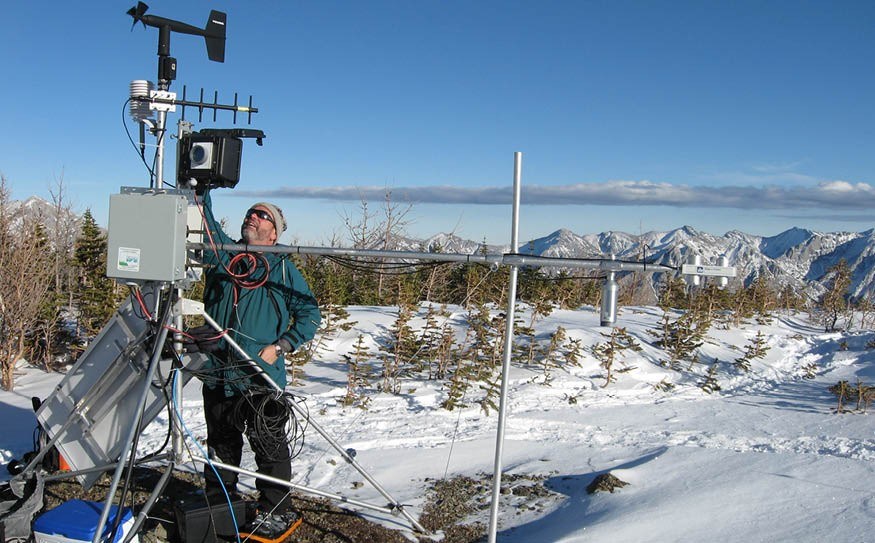 With meltwater from the Columbia Icefield flowing to three oceans — the Pacific, the Arctic and the Atlantic (via Hudson Bay) — the Canadian Rockies form the hydrographical apex of North America.

Despite that fact, however, the number of stations in the region from which essential hydrometeorological measurements are recorded is so paltry that resulting predictions about the rate and volume of water flowing in the region's key rivers and creeks are effectively unreliable.

But now, thanks to $835,000 in funding, 40 per cent granted by the Government of Canada's Canada Foundation for Innovation, which supports cutting-edge research infrastructure, another 40 per cent by the province of Saskatchewan, with the University of Saskatchewan providing the balance, the Canadian Rockies Hydrological Observatory (CRHO) is being established in the Bow Valley region of Alberta.

"Hydrological observatories have been established in the United States, in China and by the European Union throughout Europe to better inform water management from mountain source areas," said Dr. John Pomeroy, director of the University of Saskatchewan's Centre for Hydrology and Canada Research Chair in Water Resources and Climate Change.

"But no comparable system exists in Canada. There are relatively few weather, snow or streamflow stations above 2,500 metres elevation where a large portion of the snow, ice and water resources originate. A logical environment to start improving Canadian understanding and measurement capacity for mountain water resources is the Bow River basin."

The CRHO will consist of a network of high-tech computerized hydrometeorology observation stations that will measure streamflow and other key data, including turbulent water vapour and heat fluxes over snow, ice and frozen ground surfaces.

The stations will be established in two clusters, with existing stations being enhanced and some new ones established. The first cluster will include Sibbald Research Wetland, the long-running Marmot Creek Research Basin and Burtsall Creek in Kananaskis Country. It will also include sites at Fortress ski area, Tent Ridge and Robertson Glacier, as well as a station set up by Kananaskis Public Safety.

"This cluster has a vertical range from valley wetlands to mountain tops and will provide an invaluable and unique dataset for calculating the seasonal flows and changes in snowpacks, glaciers, wetlands, groundwater, soil moisture and streamflow in Kananaskis Country," Pomeroy said. Co-investigators on the project are Dr. Cherie Westbrook, associate professor in Geography and Planning and Dr. Warren Helgason, assistant professor in Biological and Chemical Engineering, both with the U of S Centre for Hydrology.

The second cluster will be situated in the Bow Summit and Peyto Glacier area. This arm of the project includes adopting and enhancing stations on and near Peyto Glacier installed by Dr. Scott Munro of the University of Toronto and Mike Demuth of the Geological Survey of Canada. These stations will be augmented by the addition of new stations above the Wapta Icefield and near the Alpine Club of Canada's Bow Hut, which will be operated in collaboration with the ACC and BEES (Backcountry Energy Environmental Solutions).

"Then we will mirror the elevations of these stations on the relatively unglaciated east side of the valley, near Helen Lake," Pomeroy said. "We selected these sites to enhance the number high elevation stations in the Canadian Rockies, and to add transects from drier to wetter regions, from non-glaciated to glaciated sites, and from moderate to high elevations so that we could develop a 3-D image of the flows of and changes to water, snow, ice and energy in two important headwaters regions of the Rockies."

The data gathered from all these sites will permit the scientists to develop a more accurate perspective of how much snow accumulates and redistributes over the winter, how much melts in spring and summer, how much is stored in soil moisture, wetlands, lakes, groundwater and glacier ice and how much runs off forming streamflow and eventually river flow for the Saskatchewan River system.

The Saskatchewan River, which is fed by the Bow River, provides drinking and irrigation water for most of the population of Alberta and Saskatchewan, and energy and industrial water for all three prairie provinces. That water ultimately flows to Lake Winnipeg.

The most water-stressed, populated and valuable sub-basin of the Saskatchewan, however, is the Bow River, which originates on the Wapta Icefield high above Bow Lake.

The Bow, which in recent years has become fully allocated in Alberta, is under rapidly increasing stress from climate change, land use change, drought and water consumption.

"Rapidly changing climate is causing retreating glaciers and declining snowcover in the spring, suggesting that the hydrology of this high mountain region is also changing," Pomeroy said. "The aquatic ecosystems in the headwaters of the Bow River form the heart of the Canadian Rockies UNESCO World Heritage Site and provide most of the river discharge. The balance of conservation and sustainable water management under changing climate, land use and demand in these waters will be substantially aided by the knowledge generated by CRHO."

While the implications of the changes to the Bow for downstream regions are not well understood, one thing is known — streamflow in the Bow River measured at a river-level station in Banff has dropped 13 per cent in the last century. Most of that decrease has occurred in late summer, which suggests that declining snow and ice resources will translate directly into reduced water resources.

Currently, most of the existing hydrometeorological stations, including those run by Alberta Environment and Sustainable Resource Development and Environment Canada, tend to be at or below moderate elevations. Some are only operated in summer. The CRHO sites will supplement these by monitoring at high elevations year-round and at sites of specific interest such as glaciers, forests and wetlands.

"We believe this enhancement of observational data will permit more accurate hydrological computer predictions of how much water, snow and ice we have, what the weather is and how it is changing," Pomeroy said.

The CRHO intends also to make much of its data available to the public in near-real time, which should help with snow and aquatic ecology monitoring, backcountry safety, recreational planning and transportation, as well as assist the parks in monitoring their hydrological resources.

"This project will provide a benchmark observational and prediction network for mountain snow hydrology and related hydrometeorological processes that control streamflow, aquatic ecosystems and climate in one of the most water-stressed basins in Canada — the Bow River," Pomeroy said.

"And it will contribute to increasing knowledge and reducing predictive uncertainty of the valuable mountain water resources that drive the economy of western Canada."