WB helicopter unable to land at helipad with injured youth

Fire department unable to attend to manage traffic and pedestrians
Jul 20, 2014 1:00 AM By: Alison Taylor 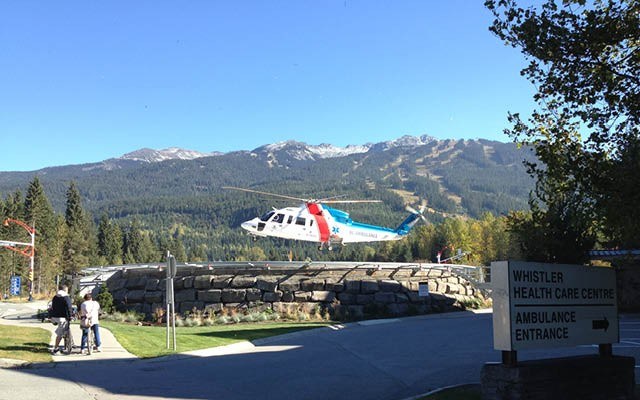 delayed arrival A youth with serious injuries being airlifted by a Whistler Blackcomb helicopter was diverted away from the Whistler Health Care Centre helipad this week. File photo

A Whistler Blackcomb helicopter, transporting a youth with a suspected open-skull fracture out of the bike park Sunday, was unable to land at the health care centre helipad and instead was forced to travel north to the municipal helipad.

This was a detour that added at least 20 minutes to the treatment of the patient — as an ambulance had to rush to the helipad to get him and bring him back to the health care centre.

He was stable at the time.

"We just got the patient a little later than we would have liked," said Dr. Bruce Mohr, chief of staff at the health care centre.

"It turned out OK in the end."

It is not clear how the mountain biker was injured.

The patient was in the health centre for just minutes before being transported to Children's Hospital by B.C. Air Ambulance, which was able to take off from the health care centre.

But in those crucial minutes following the accident in the bike park around 3 p.m., the closest helipad was temporarily stymied. It is not exactly clear what created the detour.

Since its million-dollar upgrade, the health centre's helipad has relied on a temporary system using the fire department and other municipal staff and volunteers, as well as health centre staff, to manage traffic and pedestrians when helicopters need to take off and land.

The volunteer system was put in place after pedestrians ignored traffic-control lighting, installed as part of the upgrade. Transport Canada ruled the emergency light warning system was not effective enough.

Transport Canada has also ruled that single-engine helicopters, often used in Whistler, are also unable to land at the centre.

Vancouver Coastal Health spokesperson Viola Kaminski said the helicopter bringing the youth from the mountain to the WHCC was a single engine.

"If Whistler Blackcomb was unable to land at our helipad, it was because it was single engine," she said. "This is a Transport Canada issue."

However, there was also a rush to call out personnel to staff the helipad. The fire department, which responds at times to manage the pedestrian and traffic flow, were unable to attend to this call.

The municipality confirmed through Fire Chief Sheila Kirkwood that the weekend dispatch logs show there was a call in the afternoon to attend the helipad, but it appears the fire crew was already out on an alarm call at that time.

Whistler Fire Rescue Services responded 10 times in 2013 and seven times to date in 2014 to assist at the clinic heliport.

They are not the only volunteers to respond when needed. Kaminski said there were personnel on hand to help land the helicopter in this case.

The weekend's incident is cause for concern, said Mayor Nancy Wilhelm-Morden.

"We do have the helipad immediately beside the clinic," she said. "It is a concern if a helicopter can't land there because of pedestrian safety issues, but it is being worked on and hopefully a permanent solution will be found."

She confirmed that it is a work in progress and Vancouver Coastal Health is the lead agency.

"All parties know that this is making the best situation out of the circumstances that are currently present," said the mayor.

In addition to the personnel issue, the landing of single-engine helicopters is also on the table, said the mayor.