Whistler’s favourite alternative to the bar scene is receiving some much needed help from the community.
Jul 29, 2005 1:59 AM By: Pique Newsmagazine Staff 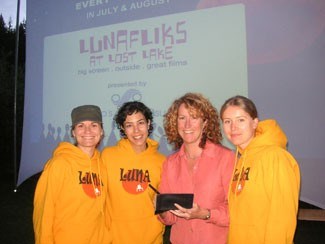 LUNA – Late and Unique Nighttime Alternatives – has received a donation of $20,000 from Whistler Community Services Society to cover general operating costs in 2005.

Janet McDonald, executive director of WCSS, said: "We were thrilled that the RMOW was willing to step in and save the day by taking over LUNA. There is a huge need in this community for inexpensive, healthy alternatives to Whistler’s usual party scene."

LUNA has also received funding for its popular summer series of outdoor movies, called LUNAFLICKS, that take place at Lost Lake every Thursday. Sharp’s Audio-Visual is taking on full sponsorship of all the required audio-visual services needed to run the movies. Additional sponsorship is also being provided by WAVE Transit, Videomatica, Mountain FM, Nesters Market, and DJ Andrews.

The LUNA program was originally designed as a response to complaints about the noise and violence in Whistler Village, which was attributed to late night, excessive drinking, predominantly by young adults. LUNA has provided affordable, alcohol-free entertainment to more than 5,000 people since its inception.

Last week’s LUNAFLICK, Fight Club , drew 480 people. Statistics gathered by the RCMP and reported in February of 2005, found the number of drug and alcohol related calls was almost 20 per cent lower on Thursdays, the day LUNA events are held.

Kiran Pal, LUNA co-ordinator, said of Sharp’s sponsorship: "We wouldn’t have been able to produce the series otherwise. The LUNAFLICKS are huge endeavors, crucial to our identity and our fall funding. Our major sponsor, Sharp’s Audio-Visual, reminded me that the business community believes in the effort LUNA’s putting into making our community a safer place. We’re extremely grateful."