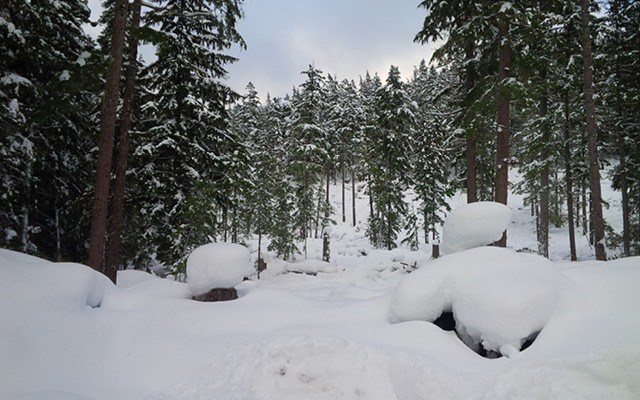 ON WEDGE A photo of an area in Wedge that was selectively logged in 2013. Photo courtesy Tom Cole

Select logging in the Wedge area of the Cheakamus Community Forest (CCF), due to start early next month, has sparked debate about ongoing logging in Whistler.

Claire Ruddy, executive director for AWARE, said it's great that residents are engaged in conversation, but she would like to see a move away from logging in the CCF toward something else.

"It seems we could direct the logging jobs into fire-thinning work. We need to get creative," she said.

"We have to find new ways to ensure those values and needs are met that speak to maintaining our unique ecosystem for future generations."

Some of the planned harvesting will take place in the vicinity of the Comfortably Numb trail but so far WORCA, Whistler's off-road cycling association, isn't worried. "We've worked with the CCF to protect Comfortably Numb," said WORCA's director of planning Todd Hellinga.

"There is some logging in the vicinity. We've provided feedback and comments through the Forest and Wildland Advisory Committee.

"They've received the comments and we'll see what happens."

In a March 2 "Letter to the Editor," in Pique Alan Whitney criticized a lack of community input into the process.

But several CCF members take issue with Whitney's statements that residents were not informed.

"We have one of the most open planning groups in the province," said CCF board chair Jeff Fisher. "People have input, we take our plans to the Forest & Wildland Advisory Committee, they review the plans every year ahead of us doing anything. So the suggestion that it's done sort of all of a sudden or without proper notification, I don't really agree with that."

CCF operations manager Tom Cole said: "We've got a great number of areas protected and voluntarily protected that should be providing everybody with at least some assurance that we're saying what we said we'd do. And I'm a little surprised: We're always going to be challenged by people's view that all logging is going to be off limits."

Both Fisher and Cole note the CCF is a three-way equal partnership between the Squamish and Lil'wat nations and the RMOW, and before the First Nations' tenure was added, the forest was less than half the size it is now. As well, they point out that the partnership involves a reduction in harvesting by more than 60 per cent, with only 24 per cent of the 33,000 hectares in the CCF available for sustainable forestry.

RMOW Mayor Nancy Wilhelm-Morden said: "We don't have an issue with logging in the Community Forest," but added the complex situation is a challenge. Although Wilhelm-Morden personally does not agree with logging old growth, she said sometimes there is no choice to harvest it as second growth is not mature enough.

It will be about 30 years before harvesting can be restricted to second growth.

As well, said Wilhelm-Morden, the plans were available and presented at open-house events for the past five years.

As to the issue of logging old growth and "clearcuts," both Fisher and Cole said clearcutting is not practiced anywhere in the CCFs, as the target openings are selectively logged with about 70 trees retained in each hectare.

- with files from Dan Falloon