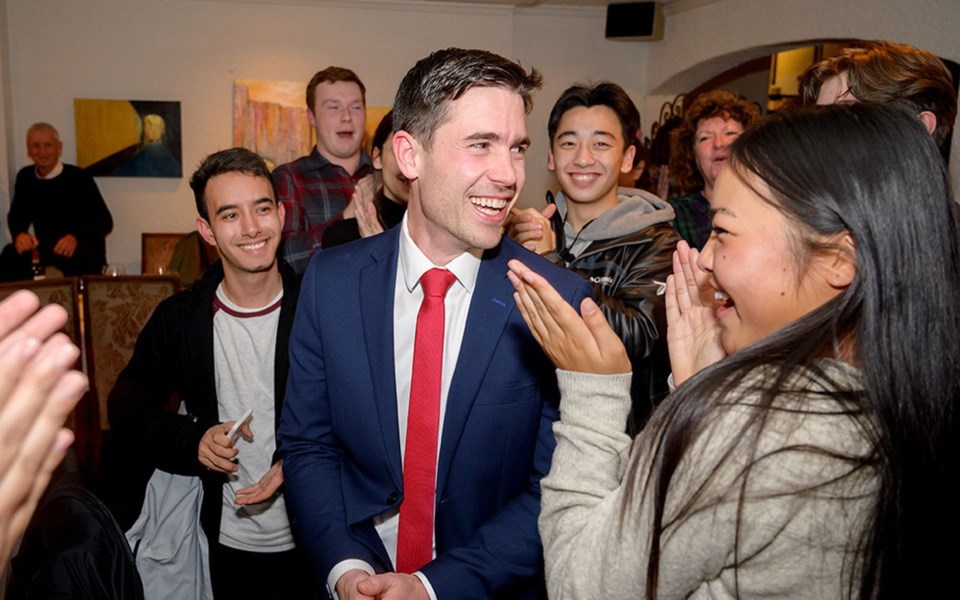 THE SEA TO SKY is staying red.

The Liberal Party's Patrick Weiler emerged victorious on election night, pulling ahead of Conservative Gabrielle Loren after what began as a tight race in the West Vancouver-Sunshine Coast-Sea to Sky Country riding.

Nationally, the Liberal Party secured a minority government, while the Conservative Party holds a slight edge in the popular vote.

Weiler, who made his election night headquarters at a restaurant on Marine Drive in West Van, said he was "incredibly excited, incredibly thankful and incredibly humbled and privileged" to have the opportunity to be the next MP for the riding.

He also said his team expected a tight race.

"We always thought it was going to be very close and every vote was going to count and we had that in our mindset from the get go to make sure that we put everything into it," he said.

Previous Liberal MP Pam Goldsmith-Jones enjoyed widespread support throughout the riding in 2015 on her way to pulling in nearly 55 per cent of the vote, and Weiler said this time out he sensed the same support across the Sunshine Coast, Sea to Sky and West Vancouver regions.

"We definitely felt that was the case and it really rang through door knocking," Weiler said.

Weiler said being in a minority government with less representation in B.C. than the previous Liberal government will be a challenge, but with Jonathan Wilkinson winning re-election in North Vancouver and Terry Beach in Burnaby North-Seymour, "we're going to have a really strong North Shore team" and "it's a challenge I'm really excited to take on and I'm looking forward to working with other parties." Weiler said, shortly after hearing the news.

Results are still preliminary, as not all votes have been tallied.

The Green Party's Dana Taylor is tracking to finish third (with the party's best-ever showing in the riding) followed by the NDP's Judith Wilson.

The People's Party's Robert (Doug) Bebb was tracking to finish a distant fifth, followed at the bottom of the pack by the Rhino Party's Gordon Jeffrey and Independent Terry Grimwood.

Pick up Thursday's Pique for a full campaign wrap-up.