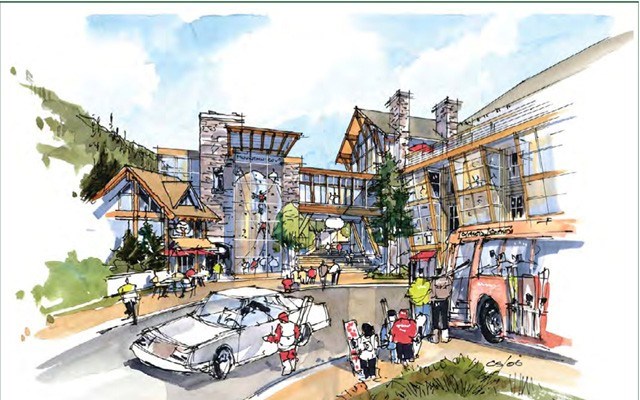 It takes a village An artist's rendering of the planned Cypress Village project in West Vancouver. Image submitted

The District of West Vancouver (DWV) is eyeing a mountainside village project that could have a similar feel to Whistler — though the project is still very early in the development process at this point.

Cypress Village, as the project is being called, would be a mix of residential and commercial properties concentrated near the base of Cypress Mountain along Cypress Bowl Road.

According to David Hawkins, senior community planner with the DWV, the project was born through the planning process of a different neighbourhood several years ago.

"Out of that planning process came the idea that there should be some sort of commercial and cultural or social centre, if you like, in the upper lands," Hawkins said.

"So the idea that instead of just having residential development going forward, which has been the sort of historical norm, there would be some sort of village."

At this point, specifics of the village — total square footage, number of shops and restaurants, types of housing, etc. — are a long way from being finalized.

Hawkins said that while Whistler is focused on recreation and tourism, Cypress Village would be more of an extension or integration of West Vancouver.

"It would become part of this community, and would be a place where West Vancouver residents live, recreate, go shopping, drink coffee and enjoy the view," he said.

"The idea is that it would be a complete community with a range of housing options for all ages, all incomes and so on."

A council-appointed working group of citizens has been tasked with providing a direction for the development of the land. For the past two years, the group has been looking at the whole of West Vancouver's mountainside — nearly 2,500 hectares worth of land.

"(They've been) looking at it in terms of environmental data, what lives up there, what are the forest systems, and also who's using the mountain," Hawkins said.

The working group also had to take into account existing bylaws, land-use controls and policies.

"Council asked them to look at all that and then, in a way, provide some strategic guidance about what they think might make sense for the hillside going forward," Hawkins said.

By concentrating all mountainside development into a smaller area around a village, less of the mountainside will be developed, Hawkins said.

"I think the thinking is twofold. They get to protect much more land for environmental reasons and for recreational purposes, but also, if you concentrate development, if you cluster it into a smaller area, then different things become possible," he said.

Hawkins described the process as "citizens talking to citizens" to determine how best to use and protect the mountainside.

Over the past 30 months, the nine citizens who make up the working group have invested countless hours into the project, including holding two open houses to date.

Andy Krawczyk — co-chair of the working group — said the hope is that 90 per cent of the 2,500 hectares be protected.

"We want to protect about 90 per cent of it because of the importance the community has placed on it — because of the obvious geological environmental concerns that people have — and quite honestly, for the iconic nature of what those upper lands are," Krawczyk said.

"But we also want to open them up for recreation so that people can see what they are and take advantage."

Krawczyk said the extent that the community has been involved in the process has been "absolutely critical."

"There's a real sense of ownership on the part of people living in West Vancouver about the lands that we live on... we feel that we're stewards for the entire lower mainland and the province in terms of some of these lands as well," he said.

"It's not just for our sake but for everybody in terms of the enjoyment of them as well as the proper use of them."

The working group will take its final report to DWV council in June.

"I think the planning process for something as important as that — with full community consultation and so on — is at least a couple of years, so this might be planned over the next two to three years."