If you are out at Lost Lake looking into the water and happen to see a swirling black mass look a little closer and what you might see a school of Western Toad (Anaxyrus boreas) tadpoles swimming in the warmest, shallowest water available.
Jul 25, 2012 9:00 PM By: Julie Burrows 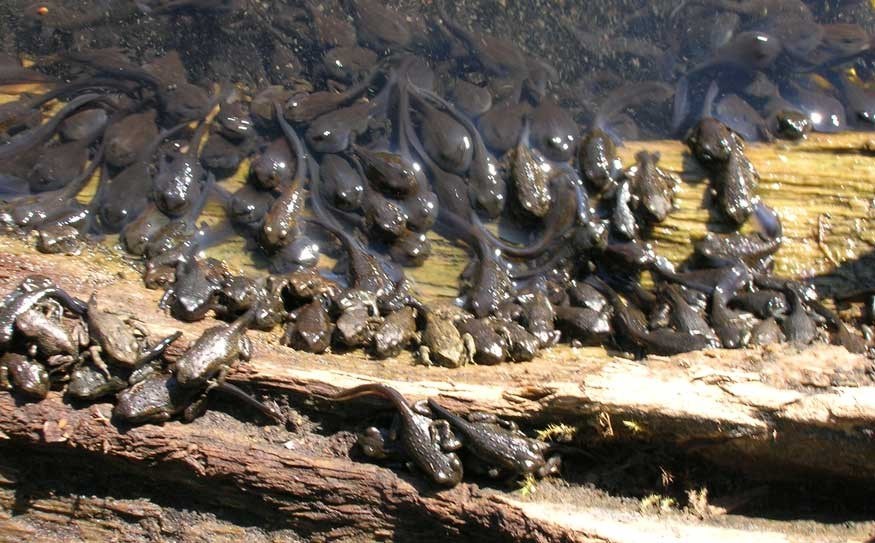 If you are out at Lost Lake looking into the water and happen to see a swirling black mass look a little closer and what you might see a school of Western Toad (Anaxyrus boreas) tadpoles swimming in the warmest, shallowest water available. It is crazy to even imagine trying to count the exact number but it's estimated that there are at least 45,000 tadpoles already this year.

Adults were observed breeding on May 8 this year in the wetland area in amongst the emergent vegetation. Adults breed at two to six-years of age and one female can lay 12,000 – 16, 000 eggs. This may seem like more than enough to maintain a healthy population but less than one per cent will survive to reproduce.

At this stage of their lives the Western Toad tadpoles breathe through gills like fish. Their skin is very sensitive so it's important not to touch them and be mindful that sandy or mucky lake bottom that gets stirred can cause them to be stressed or choke.

Some of the predators that prey on Western Toad tadpoles are garter snakes, ducks and crows. Miraculously tadpoles that are injured by predators can release chemicals that warn others of impending danger!

Western Toads are relatively common in most of B.C. but are considered a species of conservation concern and are on the provincial Blue List. Populations are at risk from disease, pollution, and habitat loss and fragmentation.

Anywhere from one to three months after the tadpoles are born they will emerge as juveniles (toadlets) ready to start feeding on insects and getting ready for their annual migration upland towards the forest to find a winter den. Please keep an eye out for signs and potential detours at the park to prevent the toadlets from getting accidently stepped on or run over.

You can help protect biodiversity by becoming a citizen scientist, keep an eye out for critters in your back yard and report amphibian sightings at Frog Watch BC http://www.env.gov.bc.ca/wld/frogwatch/frogwatching/.

Hope you can make it out to an upcoming Whistler Naturalists event: Whistler's 6th Annual BioBlitz at Alpha (see below story).

The next monthly Whistler Naturalists bird walk will take place on Saturday, August 4th at 7am.

For full details on up and coming events, visit the Whistler Naturalists website at http://www.whistlernaturalists.ca/.