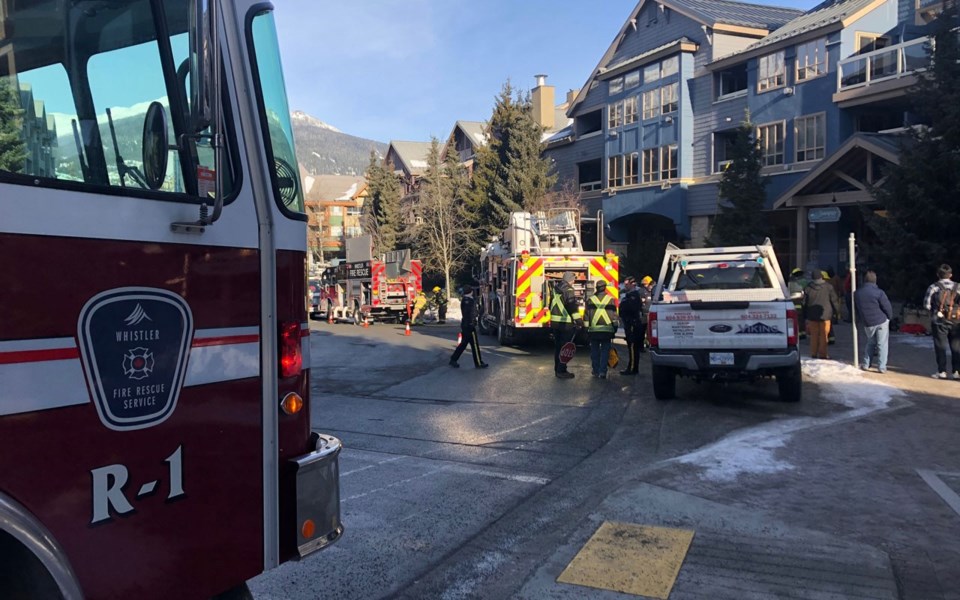 The Whistler Fire Rescue Service attends to a fire in the Tyndall Stone Lodge building on Feb. 10. Photo by Lindsey Ataya.

UPDATE: While an investigation into the cause of the fire is underway, Whistler Fire Rescue Service deputy chief Chris Nelson said it may have stemmed from an electrical issue with the microwave.

The call came in at about 9:20 a.m., and the unit was unoccupied at the time.

“It appears to be the microwave that started the fire … not 100-per-cent sure, but I think in all likelihood that’s where it started,” Nelson said, adding that he has notified Technical Safety BC of his suspicions.

“But the sprinkler head did its job; it contained the fire.”

The WFRS will maintain a fire watch on site for six hours, Nelson said, adding that about five residential units may be impacted by the fire. An Emergency Social Services reception centre is being set up at the library for those displaced by it.

“We talked to a number of people—some of them are full-time renters, some of them are just coming here for a couple of days, one person was a month-long visit kind of thing—so there’s varying tenants in there,” said Nelson.

Nelson was also one of the WFRS members who responded to the 2013 fire in the same building—coincidentally, one floor above the Feb. 10 fire.

“So this was the unit that was directly below (the unit that caught fire in 2013) … it’s a total coincidence,” he said, noting that the 2013 fire was caused by construction work being done on the exterior of the building.

“This one is completely unrelated. It’s interior, it’s a kitchen fire, and no one was home, so it was just a fluke,” he said.

“We stopped as much as we could, and it’s a matter of drying it out, and I think [Purebread] will be back up and running hopefully sooner than later, but yeah, it’s just horrible to have that happen to them twice in literally seven years.”

THE WHISTLER FIRE Rescue Service (WFRS) is on the scene of a fire at the Tyndall Stone Lodge in Whistler Village this morning.

Purebread owner Mark Lamming said the fire occurred in the unit directly above his shop.

"Looks like it started in the kitchen, and (there was) quite a bit of smoke," Lamming said.

"The sprinklers went off, and we're completely flooded. Like, completely. Everything is pulled out ... it's a mess."

Lamming said the fire represented "a bit of déjà vu," referencing a blaze in the same building in November 2013 that kept Purebread and other businesses out of operation for a year.

"It might not be as bad as it was last time for us, because they had to gut completely, and I think by the look of it [this time] it's water damage, and hopefully we've saved the equipment," Lamming said.

"It might be just a matter of seeing if there's any structural work they need to do, but either way we're going to be shut for some time."

Lamming said he could see some water in the neighbouring shops, "but minimal. It was directly above us, so the water just came straight down."

Even in the immediate aftermath of the fire, Lamming was looking to the bright side.

"I'm just trying to look on the positive side; no one was hurt, and there's bigger things in life to worry about than this, and we'll just do what we can."

Check back with Pique for more as this story develops.

British Columbians see BC Parks having role in economic recovery: survey
Sep 26, 2020 11:00 AM
Comments
We welcome your feedback and encourage you to share your thoughts. We ask that you be respectful of others and their points of view, refrain from personal attacks and stay on topic. To learn about our commenting policies and how we moderate, please read our Community Guidelines.