What Alex Honnold did on his vacation 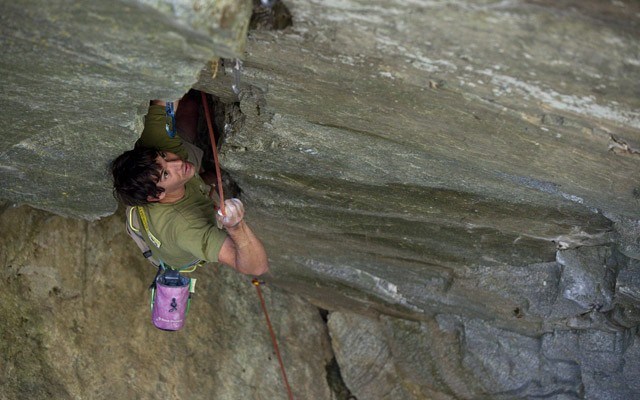 The Stawamus Chief, the mountain that rises along the Sea to Sky Highway above downtown Squamish, is often referred to as a "monolith."

But that single word doesn't really do justice to its unique, crinkly visage, with smooth sections of glacier-ground granite breaking up countless cracks and folds — and attracting rock climbers from around the world.

Living in his van in Squamish for the summer, American Alex Honnold decided to give himself a 29th birthday challenge on the Chief and on other climbing routes in Squamish on Aug. 17. He agreed to do it as part of the RV Project series for Epic TV.

Honnold is arguably (some say unarguably) the top professional free soloist in the world at the moment, which means he regularly climbs large rock walls armed only with his climbing boots and a bag of chalk to keep his hands dry. No ropes or gear, and no other safety equipment.

For his birthday Honnold solo-climbed 290 pitches on the Chief in a single day (for most climbers a pitch is defined as a single rope length).

This is an estimate, but as far as Honnold goes it isn't farfetched. He likes to set himself challenges that others can't contemplate.

It proved difficult to reach Honnold by cellphone while he was in Squamish; it turned out he wasn't paying it much attention. He departed for a short North Face-sponsored speaking tour in the U.S. and luckily switched his phone back on.

"I've spent a month so far in Squamish and after I'm back from the tour I'll be there another week or two," he said from Colorado.

"It's actually my fourth summer (in Squamish) over the last eight or nine years. I spend about a month or so there. Squamish is one of the best places to climb in the summer, everywhere else is too hot."

It's not just the temperate rainforest coolness that attracts him back and an explanation from Honnold puts into context why climbers love it.

"There are tons of hard routes," he says. "There's almost unlimited climbing in Squamish because the local folks, really strong and motivated, are putting up really hard routes. This year there are whole sectors I'd never heard of before, whole places being developed and I have to ask local dudes where to find them. Cool."

Honnold said he was on vacation looking for fun and resting an injured shoulder, but for him this means still keeping eyes, fingers and feet on the mountain as much as possible.

"I never really have an agenda. I had a collection of things that I tried before and hadn't finished, and it was like tying up loose ends here and there," he said.

One of those loose ends was to climb the Grand Wall route on the Chief in an attempt to retake the speed record for that route after local climber Marc-André Leclerc won it from him almost a year ago.

The Grand Wall is described by mountainproject.com, which rates climbs, as "having it all: perfect rock, great setting, runout slab, strenuous laybacking, delicate face and many variations." It was first ascended in 1961, and is essentially what established Squamish as a climbing hub.

Leclerc had shaved a minute from Honnold's old record, free soloing the Grand Wall in 58 minutes. Honnold held the previous record of 59 minutes along with fellow American Kinloch Mason Earle.

"(Leclerc) had broken a speed record I'd set... so I planned to retake a couple of things," Honnold said.

And retake it he did — climbing the Grand Wall this summer in just 38 minutes.

"That was one of the things I wanted to do. But it's not a huge deal, or anything," Honnold said, with unbelievable understatement.

"I did it in 38 minutes. I went by myself and I was free-soloing the majority of it, but I didn't technically free climb all of it... I just did everything I could to do it fast, basically."

It helps that he loves his job.

"It's a super fun style because you're back at the parking lot an hour-and-a-half later and it's 'Wow, I just climbed that mountain.' You're back at the car by 8 a.m. wondering what you're going to do for the rest of the day," he said.

When asked what his favourite climb is in the region, Honnold is temporarily stumped.

Climbs are graded from 5.0 to 5.15, with 5.11 and higher being for the "world of the dedicated climber" with steep and dangerous routes.

Honnold came to Squamish in July with climber and filmmaker Cedar Wright, another frequent visitor. They were presenting their film Sufferfest 1 at the Squamish Mountain Festival. Sufferfest 1, shot by Wright in 2013, is about a trip the pair took to climb the highest 14 mountains in California — and using road bikes to get to each one. The climbing proved a breeze, the biking not so much.

"It really is amazing what he manages to pull off completely under the radar. I mean, he can show up in Yosemite and free solo some super rad aid route and it will make all the magazines and we'll all be completely blown away by the achievement, but when he comes to Squamish, our own backyard, and solos the Grand Wall — the whole route, not just to Bellygood — in record time, or 290 pitches in a day? Suddenly you can start to put his talent in perspective. I mean I get tired trying to do six pitches in a day."

Honnold would be the last to want to see what he does being mythologized and tends to dislike the attention he sometimes gets when he does singularly terrifying things such as climbing The Nose of El Capitan (880m), which is twice as high as the Chief (417m), without ropes or gear.

His nickname among climbers, according to National Geographic photographer Jimmy Chin, who shot Honnold for a cover story in that magazine, is "No Big Deal" Honnold because he truly doesn't see what he is doing as special.

Despite that, his boldness as a climber has brought him considerable fame outside climbing in media shows such as 60 Minutes (where he was profiled in 2011), and in sporting and fitness magazines.

After Squamish, Honnold will be returning to his base in Yosemite, lecturing around the continent, and promoting the film Valley Uprising, a documentary about Yosemite's rock climbing history.

Sufferfest 2, another challenge to climb American desert towers that he and Wright set themselves, was carried out last winter. The film about it is currently being edited.

"Cedar is almost done editing that. I was just over at his house in Boulder (when Honnold did his talk there last week) and watched the edit. I think that will be full film-festival style, very different from the first one. It's a little more pro," he said.

"We've just started toying with the idea of doing Sufferfest 3 late next year. I'm sure we'll continue to adventure over the years but we're not in a hurry. But I think we might be done with the bicycles."

In theory, Honnold lives in Sacramento, where he uses his Mom's address.

"But I'm only there a couple of weeks a year. Normally, I just call my van home."