Where the club and classroom meet

Long-time local Riddim Fernandez talks about pulling double duty as a high-school teacher and producer/DJ
Jan 30, 2019 7:30 AM By: Alyssa Noel 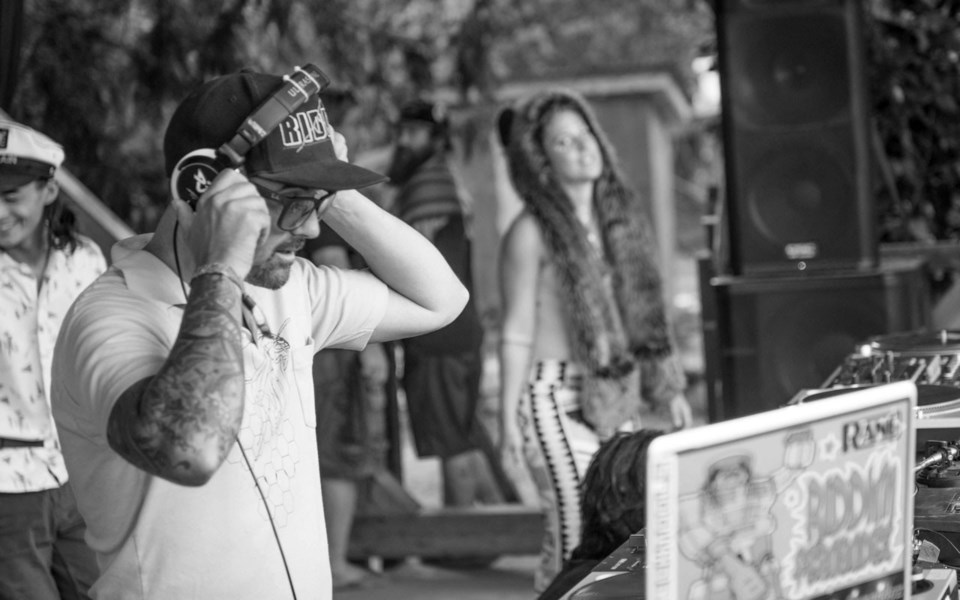 on stage Riddim Fernandez, one of Whistler's long-time DJs and producers, also works as a teacher. Photo submitted

Riddim Fernandez was DJing on The Beach Stage at the Shambhala Music Festival a few years ago when he heard a group of five guys shouting in the crowd.

Their enthusiasm wasn't unusual for a festival, except that "I was playing a very mellow set," Fernandez says. "I couldn't see them because I was up on stage, so I asked the MC to go see if they were OK."

It turns out they were just fine. "He came back and said, 'You taught them all math!'" Fernandez recalls with a laugh.

The long-time Whistler DJ and producer lives a double life of sorts—with those two worlds colliding on occasion, as they did at the festival. During the day, he teaches physics and math at Whistler Secondary School (WSS), a position he's held for the last eight years. But after hours, you can find him working on new music at home (he has around 130 tracks to his name) or DJing in Whistler clubs.

"You have to be fairly rested (for teaching)," he says. "During the winter, I try not to play more than once a week so that I don't lose sleep too much. I don't have a TV at home, so I mostly make music."

It took many years for Fernandez to arrive at two careers that might seem conflicting, but are actually complementary.

Born in Barbados and raised in Toronto, he was first exposed to the drum and bass scene after he was dragged to a show in the late '90s. "This was in Toronto at a massive Halloween party," he recalls. "Mix Master Mike from the Beastie Boys was playing with huge drum and bass guys. They were blending reggae, hip hop and jungle and I was like, 'OK, I get it.' It was a huge 'a ha' moment."

After that "I become a full-fledged raver," he laughs. "It was never super-druggy or candy ravers with all their bracelets; it was taken a lot more seriously in the jungle and hip hop community. It was about personal style." Meanwhile, Fernandez went to school and became an engineer, eventually moving to Vancouver for a job around 2000. He bounced from Montreal to Toronto, winding up in the Sea to Sky corridor.

"I kind of got sick of working in the office," Fernandez says of engineering. "A lot of my climbing friends were teachers and they got all summer off. I was pretty jealous."

After a stint volunteering at Don Ross Secondary School—coupled with experience teaching climbing—he decided to follow in his friends' footsteps, landing a job at WSS.

Intertwined with that career trajectory, Fernandez began playing at festivals like Bass Coast and the aforementioned Shambhala, as well as at clubs around town. The two pursuits are not as different as people might think, he adds.

"I think math and physics go into art," he says. "People don't realize it ... A lot of the way synthesizers work, they produce a triangle wave. How it gets processed is really neat. It goes through different filters, effects and you can see the change."

Going forward, Fernandez is poised to move his music—which mixes reggae, hip hop and jungle—in a new direction. "I want to play live," he says. "I want to take a step back from DJing and bring synths, guitar pedals and drum machines to play my music live. It's scary."

Up next, though, he's in the midst of crafting a new EP, tentatively titled Broken as an homage to his current state after an accident on the mountain led to surgery on his tibia.

"I made four tracks in the last four weeks," he says. "I like to use illustrator as well to make my album covers. But I'll try and do a nice Bandcamp page (for the EP)."

While he might be laid up in recovery for the time being, Fernandez hopes to revive a reggae or dubstep night in town this season. "If anyone is interested, get in touch with me," he says.

That call-out fits with the rules he has for his classroom—and for the wider community: "Wherever you are, support your community," he says. "Be a part of it. Get out and do stuff."

For more, visit beatport.com/release/naughty-naughty/2284137 or find him on Facebook at facebook.com/Riddim.Fernandez.