Whistler 2020 on the ground 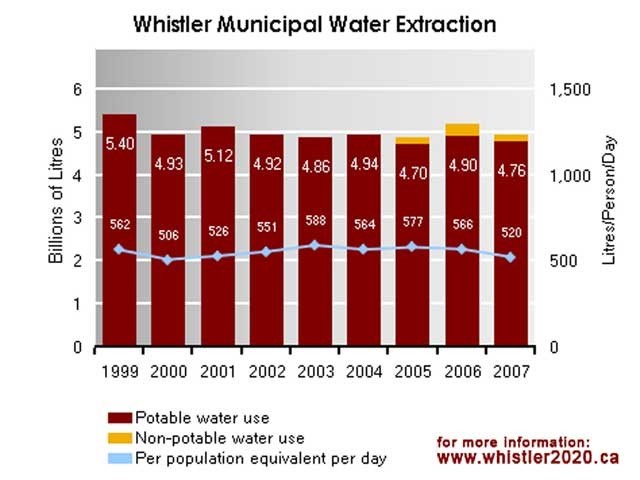 While it may seem a bit frivolous to work to conserve water in a community as water-blessed as Whistler, it is a necessity. It is time to come to grips with the fact that clean, sustainable water is a responsibility, not a right. Talk to someone in Sudan. They certainly will not look at water as a right like many North Americans do.

With our chain of five sparkling lakes, numerous rivers, creeks and streams, as well as a municipal water system that efficiently delivers some of the highest-quality drinking water in the world to our taps, it’s easy to think of water as an infinite commodity to be used — and often abused. Whistler is using 95 litres per capita per day more than our target. Whistler’s dedicated dripbusters — citizens, stakeholders and business folks — are working hard and acting to ensure our water supply continues to be fresh and abundant into the future through innovation, conservation and communication.

Water has many roles in our resort community; it is a primary indicator of ecosystem health and supports a wealth of biodiversity in the form of native species; it supplies humans with the primary source of life for health, wellness and also recreation. Water is one of the factors which helps define Whistler as a divine destination.

In B.C. we use about 490 litres per person per day — not including industrial or agricultural use of water — which we all indirectly rely on as well. Usually, in the home, toilets will use 30 per cent and about another 30 per cent is needed for bathing. According to Environment Canada, just less than three per cent of potable water is used for drinking.

In 2007, Whistler treated and sent out approximately 4.9 billion litres of water, of which 4.76 billion litres was potable. The remaining amount was used directly from wells (non-potable) for irrigation purposes on playing fields. Per capita daily water use is 520L/person/day, substantially higher than B.C.’s average. While the per capita result is also above Whistler’s recommended target of 425 L, the per capita result is decreasing on a one year and three year basis.

B.C. Environment Minister Barry Penner acknowledged the crucial role water has to play in the province when he introduced “Living Water Smart – B.C.’s Water Plan” this summer. The plan is a blueprint for cultural, environmental, industrial, community and agricultural change that will help safeguard the province’s water resources into the future. Drawing on a variety of policy measures, including planning, regulatory change, education, and incentives like economic instruments and rewards, the plan commits to new actions and builds on existing efforts to protect and keep B.C.’s water healthy and secure.

Locally, the Whistler2020 Water Community task force, formed in 2005, has been working hard to develop on-the-ground actions to initiate and support water conservation efforts and communicate the importance of water. The Whistler Fisheries Stewardship Group, a Whistler2020 partner, conducted a shoreline cleanup on Scotia Creek last Saturday. Ten volunteers managed to remove nearly a tonne of old and new mixed waste from the shoreline of this small, but vital stream which flows into Alta Lake.

As well, Whistler has two very important bylaws we all must consider when landscaping, lawn watering and cleaning outside in the summer. Bylaw 1538, 2001, better known as the “Sprinkler Bylaw” is in effect from June 1 to Sept. 30 every year and aims to make summer outdoor water use reasonable and sustainable. According to RMOW Bylaw Supervisor, Sandra Smith, Bylaw Officers have been working to educate rather than fine folks regarding water conservation. With summertime water volumes getting dangerously low, Smith says people may have to start paying for not following posted water restrictions.

“We have focused mainly on education to date,” says Smith. “If we continue to see the restrictions not followed we will move quickly next year into enforcement to support our education initiatives.” The maximum fine for wasting water is $2,000 per offence. The RMOW Environmental Stewardship Department will roll out a comprehensive water conservation strategy over the next year. Whistler’s irrigation companies are also using technology and innovation to limit automatic sprinkling in rainy periods and protecting Whistler’s potable water through the installation of backflow valves and constant systems monitoring.

Bylaw 1618, introduced in 2003, requires “all new and renovated, residential and commercial buildings within the resort community to have water-efficient toilets, urinals, faucets and shower heads.” Under the bylaw, toilets will flush 6 litres (or less) of water, urinals 3.8 litres. Bathroom and kitchen faucets should have a maximum flow rate of 8.3L/minute with showerheads using no more than 9.5L/minute.

Whistler has a long way to go to meet our per capita water use target, but action has started to flow. With a little more energy and innovation we could turn Whistler’s water conservation actions into a torrent. Ride the wave.

To learn more about actions which are moving Whistler toward our 2020 vision go to whistler2020.ca.

• Canada's per capita water consumption is 65 per cent above the Organisation for Economic Cooperation and Development (OECD) average, second only to the United States. Developing countries typically use 10 times less water than developed countries. -OECD

• An average garden hose pours out 20 litres of water per minute.

• A running tap pours out seven to 12 litres a minute.

• A water saving toilet (6 litres per flush) can save you up to 14 litres each time you flush. For the average family that's 25,000 litres per year, with that water you could fill 25 hot tubs.

• B.C. residents use much more water than the Canadian average, which is currently about 330 litres per person per day.