Five community partners come together with WAC to develop cultural itineraries
Mar 2, 2016 7:00 AM By: Cathryn Atkinson 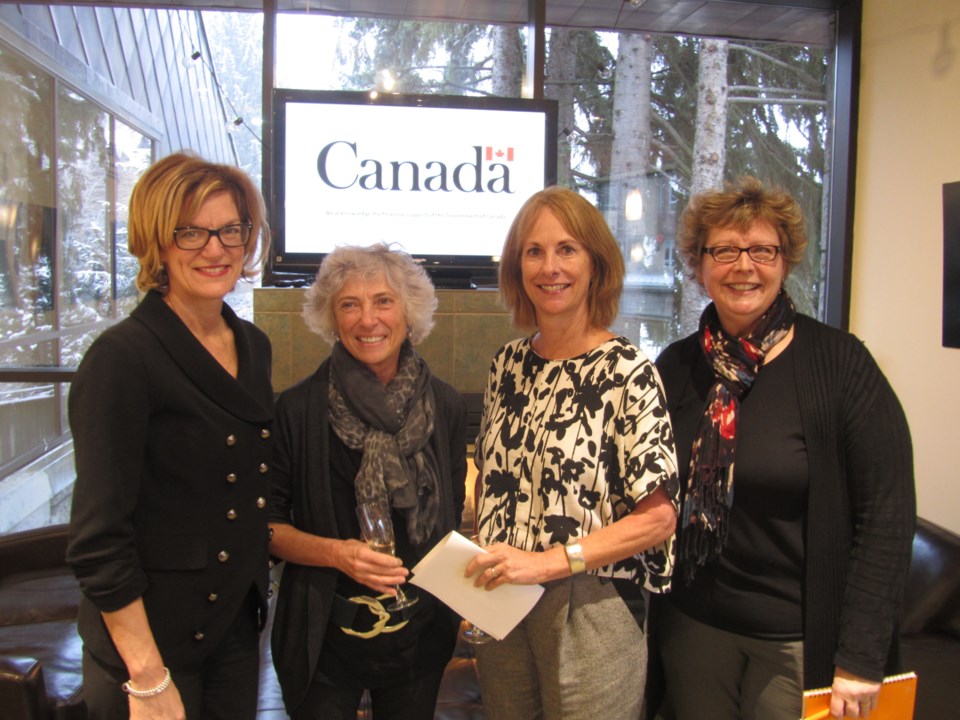 MAJOR ARTS FUNDING The Whistler Arts Council is the recipient of a Heritage Canada grant for $489,500 — its largest-ever grant. The announcement was made by MP Pamela Goldsmith-Jones, with community cultural officer Anne Popma, Mayor Nancy Wilhelm-Morden and acting WAC head Maureen Douglas (left to right). Photo by Cathryn Atkinson

The Whistler Arts Council (WAC) has received its largest-ever grant — $489,500 in funding from the federal government for its Cultural Connections project.

Pamela Goldsmith-Jones, MP for West Vancouver-Sunshine Coast-Sea to Sky, made the official announcement at the Maury Young Arts Centre on Tuesday, March 1.

“This funding will strengthen the interest, excitement and engagement in Whistler, and we can connect your remarkable talents,” Goldsmith-Jones told those who attended.

“Everyone wins, of course, in the way in which Whistler conducts itself. Your municipal planning and Olympic-sized dreams really reflect the importance of culture and creativity to the community and to your visitors.”

Maureen Douglas, who is the acting WAC managing consultant, said this was an opportunity that the arts council had grown into.

Douglas, who was director of community relations for the Vancouver Organizing Committee during the 2010 Winter Olympic and Paralympic Games, added: “It’s feeling very Olympic, I have to say, the level of momentum right now. There are so many parts and partners and possibilities.”

The application came from a joint initiative that allows the WAC and five community partners — the Audain Art Museum, the Squamish Lil’wat Cultural Centre, Whistler Chamber of Commerce, the Resort Municipality of Whistler and Tourism Whistler —to work together to link the arts and heritage attractions along Cultural Connections pathways in Whistler Village and throughout Whistler valley.

The purpose of the grant is to develop a series of cultural pathways connecting various cultural amenities, itineraries and including tours and multimedia story maps to encourage visits by tourists and residents.

Said Douglas; “Sitting in a room with our partners to talk about this possibility, it was so great to have us be at the same place that allows us to not just work with this money but also leverage everything else we can do because of this money.

“We want to explore how we make these activities sustainable, so they become the trigger that leads to something bigger.

“We’re in a place with huge building blocks in the arts in Whistler. They’re not little ones anymore. We need to find out how high up we can climb on them. It’s very exciting.”

Mayor Nancy Wilhelm-Morden noted the importance of such a grant from Heritage Canada being announced the same day as the unveiling of major public artwork by sculptor Susan Point and the same week as the ribbon cutting ceremony for the Audain Art Museum.

“It’s a very, very significant announcement,” she said. “We have over the years applied to the federal government for grants of one kind or another. More often than not, we have not been successful.

“To obtain this grant early in the Liberal government mandate is a marvellous signal of the cooperation and collaboration that we’re are expecting and we hope for in our relations with the federal government and the Liberal Party, in particular.”

The next steps, she said, would be collaborating with the WAC as recipients, along with the other partners, to map out the practical steps in moving forward in the Cultural Connections pathways plans.

Popma said they had started working on the application for funding in 2015, but the plans had stalled when the previous government called last fall’s federal election. The $489,500 represented a 25 per cent to 30 per cent boost to the WAC budget. The funding will create cultural itineraries, Popma said.

“It’s really exciting news and a breath of fresh air in terms of the arts council moving forward,” she added.

“It allows them to be a collaborative leader in the community.”

She cited as an example of potential projects the development of a program of arts and culture information training by the chamber of commerce.

This would help resort staff sell cultural tourism as an option to visitors and would enable partners to participate in useful ways.

The federal funding is for two years and came from the Strategic Initiatives component of the Canada Cultural Investment Fund, which supports projects involving multiple partners and benefitting many organizations.