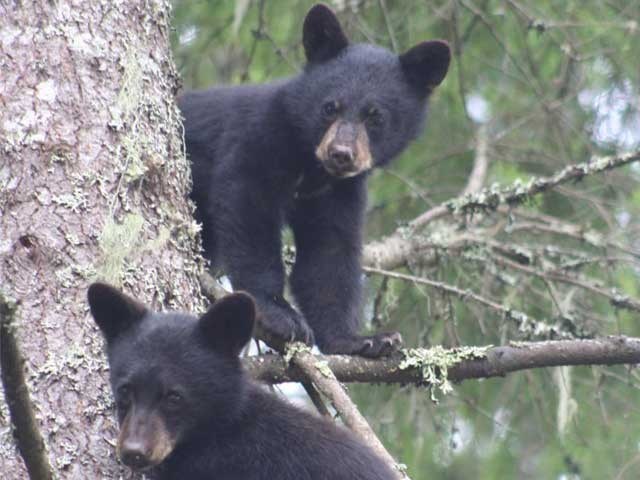 New Beginnings Bears are starting to wake up across Whistler. Photo by Drew Milne

They may be groggy and hungover from months of sleep, but Whistler's black bears are coming out of hibernation after sleeping through the winter.

Drew Milne, an officer with B.C.'s Conservation Officer Service (COS), confirmed to Pique that the bears started waking up in the week before Easter weekend. They've now spread all over the valley, with sightings reported between Function Junction and Alpine Meadows.

"I've had reports down in Function Junction, down by Alta Lake Road, up in Blueberry and in the north up in Alpine," Milne said.

Last year's bear season proved to be a deadly one for the animals. Fourteen were killed in Whistler in 2008; 11 bears were shot by the COS because they had come into contact with humans or homes, two deaths were related to highway accidents.

One of the most disturbing shootings was in May when Andrew Robertson, a West Vancouver resident, shot a bear cub on the Valley Trail outside Whistler Secondary School.

Twelve bears were destroyed in 2007.

"Public safety is our number one concern," Milne said. "We want to dramatically decrease the bear death from last year. In my opinion, one is too many deaths."

To make this happen, the COS will be instituting "attractant audits," meaning officers will be looking for garbage and food that's left outside residences and businesses without being secured.

"We'll be issuing a dangerous wildlife protection order, issuing either the residents or the business to remove that attractant," he said. "We also have the authority to issue bylaw tickets. If need be then we will do so."

COS policy dictates that officers must destroy a bear if it gets into a residence. Milne is thus asking Whistlerites to keep their doors and windows locked, especially on ground floors and at levels close to trees or wooden poles.

"What's really important for me is that Whistlerites need to keep their residence ground floor windows secure at all times," he said. "They need to remember that bears are excellent climbers and can easily (access) upper floors with the aid of trees and wooden posts."

Milne also warned Whistlerites to report all bear sightings and attempted to assuage concerns that if a call comes in, the bear will automatically be killed. There were 800 calls last year, according to Milne.

"If they don't call that in, then the majority of the time, the bears get into so much conflict that they are then destroyed," he said. "We had 800 calls in the Whistler area alone last year. If every call creates the death of a bear there'd be 800 deaths, which is not true.

"We're here to save the bears, we don't want any bears destroyed."