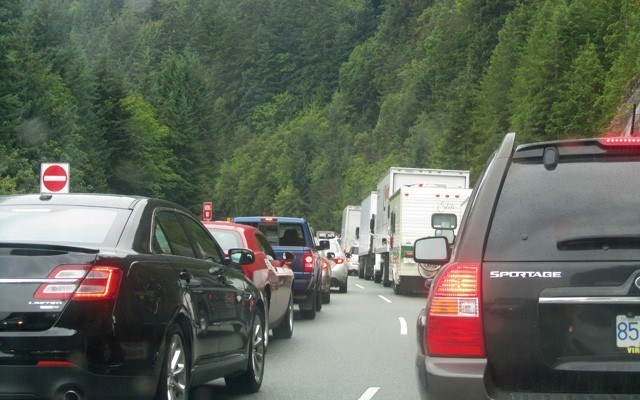 Can some “big moves” help the Resort Municipality of Whistler (RMOW) get back on course for its climate goals?

Emissions rose an average of 4.7 per cent every year from 2014 to 2017, and while a three-per-cent drop in 2018 was a step in the right direction, the municipality’s climate targets have been out of reach for some time.

Enter the new Climate Action Big Moves Strategy, endorsed by council on July 7. The strategy aims to zero in on transportation, buildings and waste, which together account for more than 90 per cent of Whistler’s greenhouse gas emissions, and sets out some new targets for the municipality.

“What we really want to be doing is focusing our GHG reduction efforts where they matter most,” said environmental stewardship manager Heather Beresford in a presentation to council.

“The Community Energy and Climate Action Plan (CECAP) was a fantastic document; it still is … but it’s so large and not really well prioritized. It was hard to be able to put our efforts where we were going to get the most results.”

While the CECAP, with its 130 actions for mitigation and adaptation, remains Whistler’s comprehensive climate plan, the new strategy “allows us to prioritize that, and really put our efforts where we’re going to get the biggest results, and accelerate our actions on climate,” Beresford said.

True to its name, the strategy outlines six “big moves” for the next 10 years: Move beyond the car (by 2030, 50 per cent of all trips in Whistler are by transit or active transport); decarbonize passenger and commercial transport (by 2030, 50 per cent of all vehicle kilometres travelled are from zero-emission vehicles); reduce visitor travel emissions (by 2030, Whistler demonstrates leadership in redefining tourism in a low-carbon world); build zero-emission buildings (by 2030, all new buildings achieve the top step in B.C.’s Energy Step Code, use only low carbon heating systems, and embodied carbon emissions drop by 40 per cent); make existing buildings better (by 2030, reduce emissions from residential buildings by 20 per cent and from large commercial buildings by 40 per cent); and close the loop and shift toward lower-carbon consumption (by 2030, reduce waste-sector emissions by 95 per cent and reduce embodied emissions from products and services).

It’s an ambitious strategy, with a handful of key initiatives listed under each big move.

To list just a few: increasing transit service while keeping fares affordable, and continuing to work on regional transit; expanding public EV charging stations, while increasing parking costs for combustion vehicles; and addressing barriers to retrofitting homes, including initial costs and a lack of knowledge, service providers, financing and incentives (find the full strategy at whistler.ca/bigmoves).

Following council’s endorsement, the next step will be to develop a detailed implementation, financial and monitoring plan, followed by engagement with experts and stakeholders on specific key initiatives and projects.

A final Big Moves Strategy will then be drawn up and presented to council in the fall.

Funding for the project comes from the provincial Climate Action Revenue Incentive Program (CARIP), which provides local governments with funding equal to 100 per cent of the carbon taxes paid on fossil fuel use related to corporate operations.

The strategy acknowledges that Whistler’s existing GHG reduction targets will not be met, and sets a new target for the coming decade.

The new recommended 2030 target for Whistler is a 50-per-cent GHG reduction below 2007 emissions, meaning that by 2030, emissions are capped at 66,000 tonnes of CO2 equivalent, said new climate action coordinator Luisa Burhenne, who was recently hired to fill the role vacated by Max Kniewasser.

“We think that we need a shorter-term target, a 2030 target, to create this urgency, to create this sense of we need to act now, to accelerate our actions,” said Burhenne, who holds a doctorate in applied science—bioenergy, and most recently worked for a firm specializing in carbon and sustainability consulting.

“We have discussed this internally and also with the CECAP advisory group, and we felt very strongly that we have to align our new 2030 target with the [Intergovernmental Panel on Climate Change] recommendation, that says if we want to stabilize global warming at 1.5 degrees, which we want for an equitable and sustainable society, then we have to reduce our emissions by 45 per cent below 2010 levels.”

“To close that gap, we need more action, more initiatives by the municipal, federal and provincial governments,” Burhenne said.

But to really be successful, the municipality must embed its reduction targets into its decision making and planning “from the get go,” she added, noting that one idea being discussed is a “carbon budget” to serve as an accountability framework similar to one being developed by the City of Vancouver.

THE ELEPHANT IN THE ROOM

For a long time, Councillor Arthur De Jong has referred to Whistler’s dependence on air-travelling, carbon-burning visitors as “the elephant in the room” when it comes to its climate goals.

While the elephant is acknowledged in Big Move No. 3, it’s not about to be shunted from the room anytime soon.

“We’ve kept this one intentionally high-level. We recognize that this is not a topic that the RMOW can tackle on its own, (and) this is really acknowledging an Achilles heel for our community,” Beresford said.

“So at this point, we want to acknowledge that while we’re going to be focusing on work that we can do here in our own community, we do want to participate in conversations with our local tourism partners, regional, provincial and global, … to look at how do we redefine tourism in a low-carbon world.”

External emissions from visitors aren’t something the RMOW can control, but “we can influence by leading by example, and by engaging, and by helping to develop plans, tool kits, educational tools,” Burhenne added.

“And this is really something we will identify in more detail in the implementation plan—who are the key people to talk to and what are the actions that may have influence.”

“We think that where Whistler can have more success with that is to work with other communities who are trying to do the same thing, and perhaps [the Union of BC Municipalities] is a vehicle,” she said.

“We will have more strength as a collaborative of communities.”

Council had many questions about the strategy, with each council member weighing in over an extended discussion.

While the prospect of new technologies is “very exciting,” it’s unlikely there are any immediate developments that will help the RMOW achieve its goals, Burhenne said.

“That’s my background, renewable energy technologies, but I also think as a municipality, it’s very important to have something reliable and proven to lower the risks,” she said.

That assurance was encouraging to Coun. Ralph Forsyth, “but I’m cynical; my experience has made me thus, because I’ve wanted for some time to see some kind of report that measures the efficacy of the programs we had already put in place, or things we’ve already used and adopted,” he said.

Such a report was done about eight or 10 years ago on municipal facilities, said general manager of corporate and community services Ted Battiston, adding that the biggest single investment the RMOW has ever made in a municipal facility was with the $930,000 solar and geo-exchange system installed at the Meadow Park Sports Centre in 2010.

“I do believe that we hit that payback period in six or seven years, and now we are saving well more than $100,000 a year in operational costs in that building every year since that time,” Battiston said.

“But your point is well taken, and we do track for RMOW facilities ... we can certainly strive to bring that back to council’s attention.”

As for avoiding passing eco fads and ensuring the best bang for the municipal buck, “I hear you, Councillor Forsyth,” Beresford said. “But we don’t have time anymore to be doing things that are not going to work.”

Watch the full discussion at https://www.whistler.ca/municipal-gov/council/meeting-agendas-and-minutes.