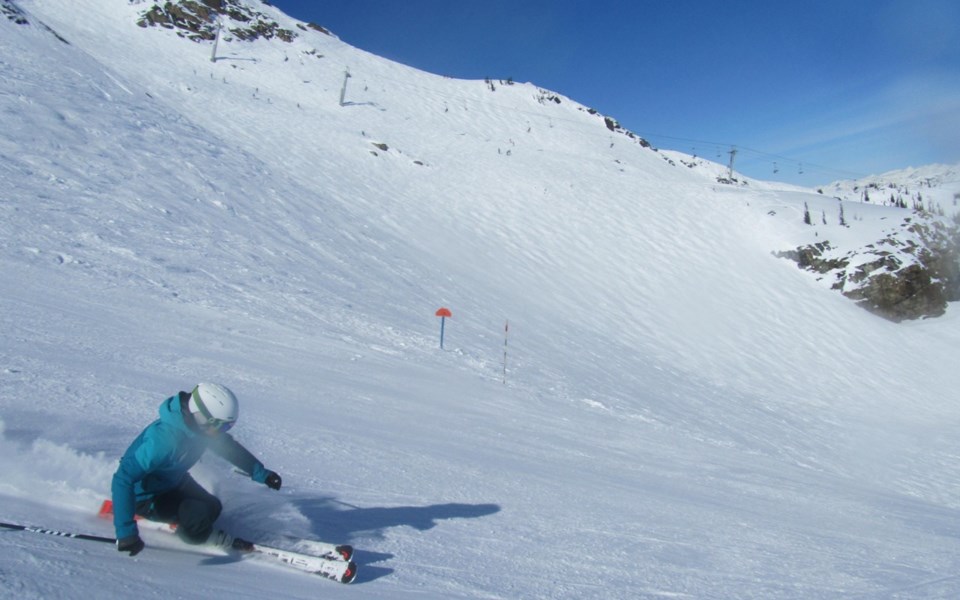 ON THE EDGE Whistler Blackcomb will offer a two-day Edge card this winter. Photo by Joel Barde

Casual skiers will be breathing a sigh of relief this year, thanks to news that Whistler Blackcomb will be offering a new addition to its suite of passes—a two-day Edge card.

“We’ve taken a lot of feedback over the course of last season from some folks who felt that the five-day card didn’t deliver the kind of affordability they wanted, and so today (Aug.1) we’re announcing that there is a two-day edge card coming back,” said Marc Riddell, communications manager for Whistler Blackcomb.

“We saw an opportunity here to provide an affordable option for more casual skiers who are interested in coming up to the mountains maybe one or two days a year.”

The two-day Edge card will sell for $229 for an unrestricted version and $199 for a restricted version that has certain blackout periods. In comparison, day tickets for the resort last season sold for $160 during peak times.

Whistler Blackcomb’s latest offering comes after a challenging year for the resort when it comes to how it is perceived by some of its customers. The resort’s parent company, ski-industry heavyweight Vail Resorts, was criticized in both domestic and international media over a perception that it caters mainly to an international jet set, shutting out locals and the drive-to markets.

Some of the criticisms levied at Vail Resorts stemmed from changes it made to its pass products. Following its $1.4-billion purchase of Whistler Blackcomb in 2016, Vail Resorts eliminated the one-and three-day Edge cards.

In an editorial meeting with Pique in May, Vail Resorts CEO Rob Katz was asked about bringing back the three-day Edge card, and the public complaints the company had faced over its pass products.

At the time he wouldn’t commit to the three-day Edge card, but said the company was listening to its customers.

“We heard … that five days is too many, and there are people who would like to buy less than that,” said Katz.

“We’re continuing to listen to that feedback and see if there is something else we can do for the more casual skier.”

Then, in a June 18 Business in Vancouver article, Whistler Councillor Steve Anderson said that Katz told Whistler council in a briefing that Vail Resorts planned on bringing back a short-duration pass.

Another point of contention among some locals is the loss of the parent pass. Prior to Vail Resorts’ takeover, parents had the option of purchasing a shared pass that could be used by either parent.

Vail Resorts will continue to allow parents to purchase two unlimited passes for a total of $1,499 (adult unlimited passes are $1,289 each normally), but the offer is only open to parents who qualified for it in the season prior. In practice, it’s effectively being phased out.

“We’re happy to be able to still offer it to those folks who are already enrolled in the program, but it’s still not something that we’re looking at,” said Riddell, ticking off a list of initiatives he feels are aimed at improving accessibility and the on-mountain experience.

Since taking over, Vail Resorts has reduced the cost of a seasons pass by five per cent, introduced a program that allows for five free days of skiing for kids in kindergarten to Grade 5, lowered the cost of the Spirit Pass so it’s more in line with the Epic Pass, and committed to investing $66 million in upgrades and new lifts, said Riddell.

“A combination of all those things, demonstrated our commitment to this community and how much we value local support,” he said.

Despite some challenges on the public relations front, Vail Resorts posted strong earnings last season.Revenue for the quarter that ended April 30 rose 6.5 per cent to US$841.4 million, and its overall profit during the quarter rose 41.5 per cent, to $256.3 million when compared with the same quarter a year ago.

Posting a record number of visitors over the winter, Whistler Blackcomb is seen as an engine of the company’s success.

Skiers and snowboarders have until Monday, Sept. 3 to lock in the lowest price on Whistler Blackcomb’s new two-, five-, and 10-day Edge cards. The Epic Pass is priced at US$899 this season and this year offers access to 65 resorts, including including Kicking Horse Mountain Resort, Fernie Alpine Resort and Kimberley Resort in British Columbia, Nakiska in Alberta, Mont Sainte Anne and Stoneham in Quebec, and Stevens Pass in Washington State for the first time. (Unlimited access is only offered at the 14 Vail Resorts-owned properties, however.)