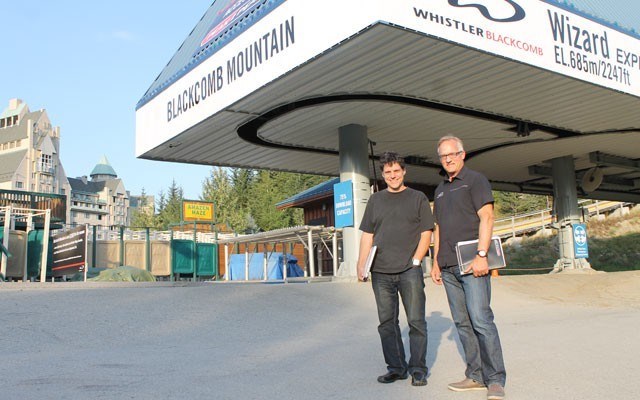 TOP SPOT SKI Magazine editor Greg Ditrinco with Whistler Blackcomb senior VP of marketing Stuart Rempel in 2014 after Whistler Blackcomb was named the No. 1 ski resort in North America by the magazine's readers. WB reclaimed the honour in 2015. Photo by Brandon Barrett

“We are very grateful to the readers of SKI Magazine for giving us, and the entire Whistler community, this honour for the second year in a row,” said Dave Brownlie, president and CEO of Whistler Blackcomb, in a release. “We realize how influential the annual SKI Magazine Resort Guide is, so to receive this kind of recognition right around the time people are planning their winter ski vacations is invaluable.”

This marks the third time in the past four years WB came out on top of poll, the longest running and most comprehensive of its kind.

Readers were asked to rank the top 50 ski resorts in North America in a variety of categories. Along with nabbing the No. 1 spot in the overall ranking, Whistler Blackcomb also earned top marks for terrain variety, off-hill activities, après and terrain parks, and claimed second in lifts, lodging, scenery and overall satisfaction.

“Whistler Blackcomb offers today’s skiers and riders one of the finest resort experiences anywhere," said SKI Magazine publisher Allen Crolius. “From big-mountain skiing to a base village that sets the standard for mountain resorts, Whistler Blackcomb earned its top ranking from our readers.”

The resort improved in several categories in 2015, including moving up 11 spots in grooming, 15 spots in access, where it ranked 25th in 2014, and two spots in service, up from 5th last year.

In a release, Tourism Whistler CEO Barrett Fisher spoke about the resort partners who work to set Whistler apart from the competition: “Whistler’s success is built on a foundation of strong resort-wide partners,” she said. “I would like to congratulate Whistler Blackcomb for its ski area leadership, along with all of our resort businesses who continually strive to exceed our guests’ expectations. As well, I would like to recognize the Resort Municipality of Whistler for its oversight of village and recreation amenities, and the Whistler Chamber of Commerce for its service excellence program. We truly have a great team.”

Whistler Blackcomb is slated to open its 50th anniversary season on Nov. 26, although riders can expect an early opening if conditions allow it.

On tap for this season is the opening of the renovated Rendezvous Lodge, and the launch of a new WB+ platform that will link to the resort's RFID technology.