Minimal snowfall has created challenging conditions for WB, Whistler Olympic Park ahead of Nov. 22 openings
Nov 20, 2018 5:50 AM By: Megan Lalonde 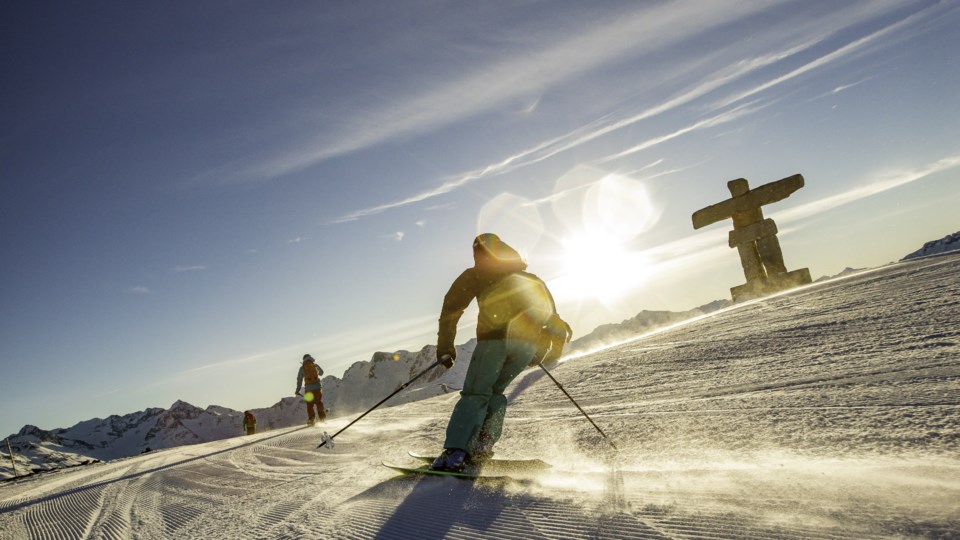 OPENING DAY: Despite challenging conditions and minimal natural snowfall, both Whistler and Blackcomb mountains will have limited terrain open for skiers and riders on Thursday, Nov. 22. Photo by John Entwistle, courtesy of Whistler Blackcomb

Whistler Blackcomb’s opening day, scheduled to take place this Thursday, Nov. 22, will look a little different than it has in previous years.

With minimal snowfall—lower than the resort has seen in over 15 years—runs will be open on both Blackcomb and Whistler, though conditions will be marginal. There will be no backcountry skiing and no beginner skiing available on opening day.

Skiers and snowboarders will be able to use the Village Gondola, Emerald 6 Express and Franz’s Chair to ski Ego Bowl and Upper Whiskey Jack on Whistler. The Jersey Cream Express and Excelerator chairlifts along with the Excalibur Gondola will be open on Blackcomb, though Whistler Blackcomb is asking guests to download via the PEAK 2 PEAK and Village Gondola.

“Early season conditions are never predictive of the season’s overall outcome, but we do want people to know we’re ready for when Mother Nature sends winter our way. Whistler Blackcomb is known for its consistency of snow, we have strong snowmaking capabilities and an army of people working to prep the hill. So we ask our guests to be patient, book their Christmas holidays and get ready for a great season,” said Marc Riddell, Director of Communications, in a release.

The challenging conditions have also forced Whistler Blackcomb to limit the amount of skiers heading up the mountain for opening weekend, in this case meaning restrictions for staff members. In the email sent to Whistler Blackcomb staff, and obtained by Pique, COO Pete Sonntag said, “The limited terrain puts us in a difficult position and Whistler Blackcomb's Senior Leadership Team has made the hard decision to put off-duty employee and dependent pass restrictions in place from Opening Day through Sunday, Nov. 25. Employees who are not working should refrain from accessing the mountains during these dates.”

Throughout opening weekend, a mandatory download will remain in effect. On Blackcomb, downloading on Excelerator Express and Excalibur Gondola will be limited. Skiers and riders will not permitted to skin up on Whistler Blackcomb property to access the backcountry, with backcountry tickets remaining unavailable for purchase. Whistler Blackcomb will provide shuttles from the Blackcomb Base and Lots 4 and 5 to the Village Base. Although the Creekside Gondola will remain closed, parking will be available in the Creekside Parkade throughout the weekend. Public transportation can be used to get to the Village.

Down the highway in the Callaghan Valley, Whistler Olympic Park will also celebrate its opening day on Thursday, Nov. 22. Despite limited natural snowfall, cross-country skiers will be able to ski on “Callaghan Gold,” a one-kilometre loop located adjacent to Whistler Olympic Park’s biathlon range.

The loop is comprised of natural snow preserved from the previous season under sawdust. It will be open for skate skiing only and is recommended for intermediate and advanced skiers, not beginners.

“We primarily created this loop for early-season athlete training starting end of October. Now it enables us to provide snow access to the public, while we are waiting for natural snow, which may come later this week, it is hard to predict,” explained Tim Hope, Managing Director of Whistler Olympic Park in a release.

Whistler Blackcomb’s opening day will also mark the unveiling of the first of three new lifts installed for the 2018-19, with the Emerald 6 Express Chairlift set to accommodate six people per chair and move 3,600 people per hour through the busy Family Zone.

Catskinner Chairlift on Blackcomb, upgraded from a three-person to a four-person, high-speed lift, will open “as soon as weather permits,” according to a release. A grand opening ceremony for the new Blackcomb Gondola is scheduled for Dec. 15, although the lift itself is targeted to open for public use Dec. 14.

“Our company invested $66 million in on-hill upgrades this year, so we could move people up the mountain and around the mountain faster. Ultimately, when you ski or snowboard at Whistler Blackcomb this year, you’re going to get more runs in your day,” explained Sonntag in the release.

While the deadline to buy a season’s pass has technically passed on Nov. 18, Whistler Blackcomb is offering an extension until Dec. 2. Season’s passes will not be available for purchase after this date.