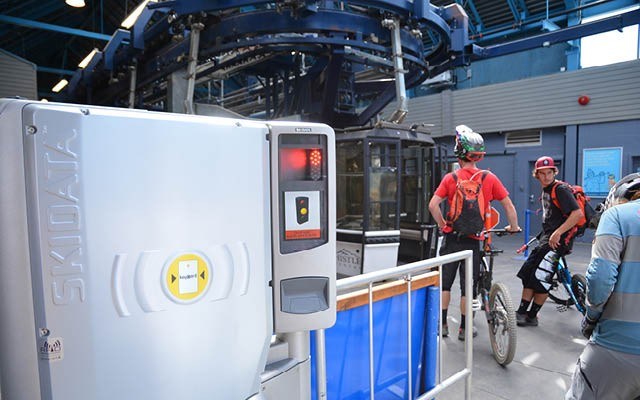 hands free Whistler Blackcomb's new RFID gates will be up and running for the start of the 2014 ski season. Photo submitted

When you head for the slopes on opening day this season you might find things are moving a little bit more smoothly.

Thanks to new Radio Frequency Identification Device (RFID) gates installed at the bottom of each of Whistler Blackcomb's lifts, you won't even have to use your hands.

"A mechanism for us to validate that saves people having to get their passes out."

The new technology will allow for shorter wait times and a reduction in lift-ticket fraud, among other benefits.

But if you're the type to be scared of newfangled technology, don't worry there's really nothing to it.

Once you've picked up your reloadable lift access card, there's only one thing to remember: Keep it in a pocket by itself, somewhere on the left side of your body.

As you walk through the new RFID gates, a sensor to your left will detect your card and grant you access to the lift.

"Most ski clothing manufacturers have pockets on the left arm... specifically for that, but the other arm doesn't have it," Sedgwick said.

But the left-sleeved pocket is no coincidence. It stems from the fact that this type of RFID technology has been used internationally at ski lifts for years.

The technology — which includes the ability to keep track of which users have been up which lifts — was more of an immediate necessity in some ski resorts in Europe, where the land is split amongst many different owners.

"In Europe, many farmers own all of the different pieces of land, so when a lift company comes in to put lifts through that region, they have to figure out who gets what, and how much traffic went through each farmer's land," Sedgwick explained.

"So they've been tracking every lift ride for a long time."

The tracking technology also assists in the area of safety, allowing Whistler Blackcomb to more efficiently search for missing persons if they know the person's name.

For security reasons, no personal information will be stored on the card.

"There isn't any data stored on that RF chip in the card. It's a number," said Yolanda Foose, IT manager for Whistler Blackcomb.

"There's a number printed on the card and then a number that comes from our system, so people can't read any personal information off the actual physical media that the guest has."

For this season, the RFID technology will be used solely for getting people up the lifts.

"In the future, we've got some potential programs that we can put in place that will benefit the guests so they can track their vertical and things like that," Foose said, adding that things like leaderboards, badges and "achievements" could be introduced in the coming years for those who like things a little bit more competitive.

But right now, the focus is on finishing the install and having everything go smoothly on opening day.

"We know long term it's going to be more pleasant for everyone," Sedgwick said.

"We just want to make sure the initial impact is pleasant for everyone as well."

A pilot run for the RFID gates is scheduled at the bike park for sometime in September.

For a comprehensive FAQ about the new gates, visit www.whistlerblackcomb.com/the-mountain/whats-new/rfid.