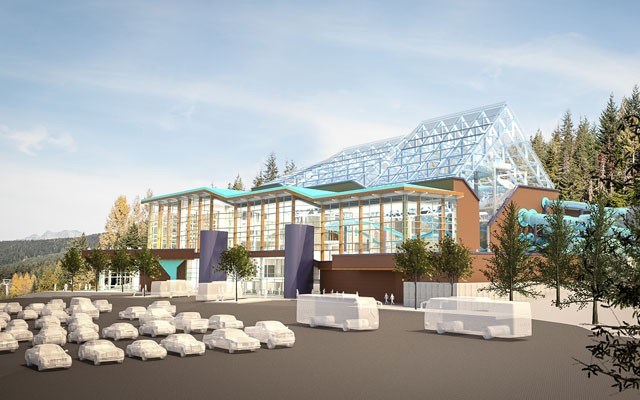 MAKING A SPLASH Artist's rendering of the proposed Watershed facility, a year-round indoor adventure centre and water play area slated for the base of Blackcomb Mountain. There will also be a slew of new activities and amenities as part of Whistler Blackcomb's Renaissance project, a $345-million investment. Photo courtesy of Whistler Blackcomb

You know it's a big deal whenever Dave Brownlie gets in front of Whistler's mayor and council. The last time the president and CEO of Whistler Blackcomb (WB) formally addressed local officials was to announce the construction of the Peak 2 Peak Gondola. A decade later, and he was once again ready to share some big news: a $345-million investment that will radically transform the resort's year-round offerings both on- and off-mountain.

"This is truly a fully integrated opportunity (and) each aspect of it adds to the whole, and in our belief will create more opportunity for reinvestment and growth within our tourism economy here at Whistler and throughout the corridor," said Brownlie at Tuesday, April 5's meeting of council.

Being touted as "the largest and most exciting investment" in company history, the three-phase project dubbed "Whistler Blackcomb Renaissance" will include the development of a new lift, an indoor adventure centre and waterpark, two high-end real estate developments, a doubling in size of the bike park and a revitalized Blackcomb base.

"This truly is a fascinating project," said Whistler Mayor Nancy Wilhelm-Morden, who commended the project for aligning with several important recommendations out of the RMOW's 2012 Economic Partnership Initiative report: reinvestment in community infrastructure, diversifying the Whistler experience and weatherproofing the resort.

"We've talked a lot, in the last couple years in particular, about weather independent attractions, about diversifying our customer base and filling the shoulder seasons, and I think that's something that's really important," Brownlie said. "Although we're coming off one of the best winters in our history, we know that's not always going to be the case and we have to look at ways to strengthen our tourism economy for the long term."

It's expected that all three phases will take around seven years to complete once approved. Renaissance will have to meet a number of conditions before construction can begin, including the renegotiation and extension of Whistler Blackcomb's Master Development Agreements and master plans with the province, consultation with both Lil'wat and Squamish First Nations, and the finalization of a proposed business partnership between those First Nations.

The project will likely also require an amendment to Whistler's Official Community Plan, as it's anticipated to add an estimated 200 bed units to the resort, according to the RMOW.

Phase 1 involves a $90- to $100-million investment in new attractions primarily located at Blackcomb base, the jewel of which being Watershed, a year-round, indoor activity centre located adjacent to the current tube park.

A significant chunk of the facility will be dedicated to a water play area that will include slides, a surf zone, a kids' splash area and hot and cold pools. The building will also feature a family entertainment centre, food and beverage options, an eight-lane bowling alley and, in Phase 2, will incorporate WB's existing Day Lodge facilities.

The Blackcomb Adventure Park, located in the Base II area, will offer a range of year-round family activities, such as a mountain coaster, rope course, winter tubing and the introduction of night skiing.

"What this does is really offer a much broader opportunity in terms of the marketplace for people who come to Whistler Blackcomb and the resort," Brownlie noted.

WB will also move its children's learning area to Base II, allowing for more terrain as well as the addition of covered magic carpets.

Key to dealing with the added traffic will be the construction of the new Magic Gondola, which will ferry skiers, snowboarders and foot passengers from the base of Blackcomb to Base II.

The bike park hasn't been lost in the shuffle either, with plans to more than double the existing downhill terrain with the addition of 50 kilometres of new trails, primarily at Creekside.

"We think that's going to do great things for stimulating the business at Creekside and also relieving some of the village congestion that we're having with the popularity of the downhill mountain bike park," explained Brownlie.

With the continued growth in WB's summer business, the company has committed to improving the on-mountain hiking and sightseeing experience. Plans include the construction of a suspension bridge connection the peaks of Whistler Mountain, expanding hiking trails and the addition of uphill "grind" experiences.

Phase 1 and 2 are expected for completion within four to five years after the start of construction, although Watershed could be ready after two years.

The second phase involves an estimated $105- to $115-million investment in a new day lodge and snow school facility within Watershed that is intended to become "the main portal for skiing and snowboarding" on Blackcomb.

A townhome complex called Blackcomb Terrace is slated for the development and sale of 60 high-end townhomes near the Watershed as a way for WB to help recoup some of its original capital investments.

Although it won't add to the existing 1,500 parking spots at Base II since WB intends to redevelop Lot 6, a new two-storey parking complex is also in the works.

The third phase is all about revitalization, and the $140- to $150 million investment is aimed at transforming the Blackcomb base area into "a vibrant, upscale village community" in the heart of the Upper Village.

This phase is expected to include the completion of the Blackcomb Day Lodge, the new snow school facility and a complete redesign of Blackcomb Plaza.

Luxury real estate development One Blackcomb Place is being imagined as a boutique hotel, residence and private club, moving towards WB's goal of turning Blackcomb base into "an upmarket gateway."

The company is also looking at major on-mountain improvements in Phase 3, totaling roughly $40 million. Some of the plans being considered: a new facility in the Olympic Zone that could include a rental shop, restaurant offerings and a detachable lift; lift upgrades on the front side of Blackcomb; and The Annex, a 30,000-square-foot traning centre for youth competing in various action sports.

For more information, visit renaissance.whistlerblackcomb.com or head to the Westin on Monday, April 11 for an open house from 5 to 8 p.m.