Both mountains, all three gondolas operating for Opening Day
Nov 26, 2019 7:45 AM By: Braden Dupuis 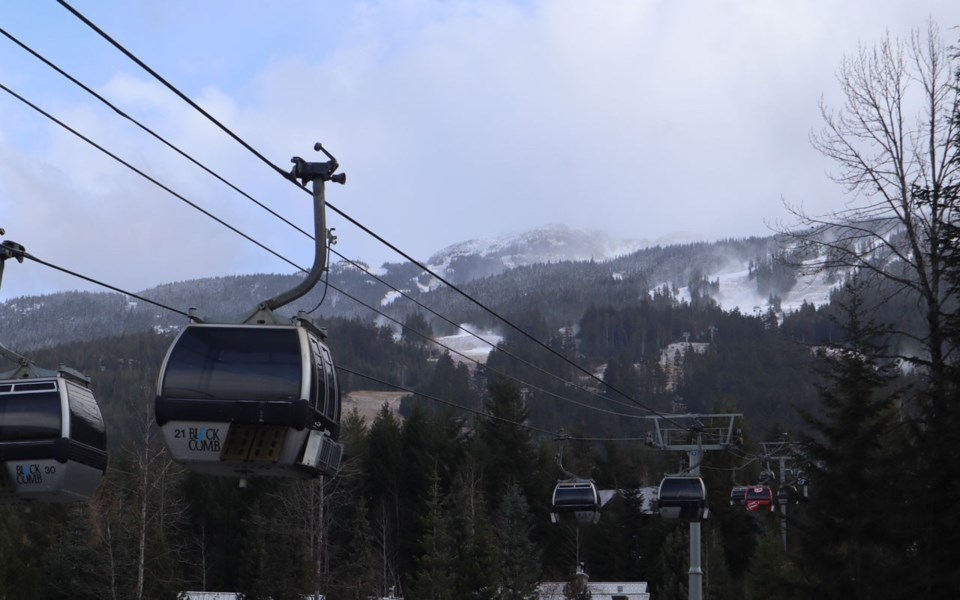 Whistler Blackcomb's snowmakers have been hard at work ahead of Opening Day, which will see both Whistler and Blackcomb mountains open for business despite a lack of snow in the valley. Photo By Braden Dupuis.

SNOW ON THE valley floor or not, Whistler Blackcomb (WB) is ready for the 2019/20 season.

Both mountains are set to open this Thursday, Nov. 28, with uploading options via the Blackcomb, Whistler Village and Creekside gondolas.

"In terms of snow we were lucky that we had a good October where we had some natural snowfall, and then combined with snowmaking, especially in these recent days, we've been able to do kind of a final push," said WB communications director Marc Riddell.

"We've got enough and we're good to go. We're confident that the package we're going to offer is similar to what we had last year ... we're excited and we're hoping that snow comes sooner rather than later and we are skiing in the valley."

On Whistler, Big Red Express and Emerald will be operating, while the Olympic Zone was still up for debate as of Tuesday ("our snowmakers are kinda working their way down there," Riddell said).

Blackcomb will have Jersey Cream and the Excalibur Gondola up and running, with the "wildcard" being Excelerator, again depending on snowmaking progress, Riddell said.

The Peak 2 Peak will also be operating.

Terrain will be varied on Whistler, he added, though there aren't many options for beginners on Blackcomb at the moment.

"We would encourage the more beginner, lower-intermediate skier to stick to Whistler, but we should have enough there so that folks can move around," Riddell said, adding that low snow challenges are nothing novel for the mountain operator.

"This is not a new movie—we've seen this before," he said.

"[Opening Day] last year [on Nov. 22] was a prime example of what we're dealing with now, and then all of a sudden it turned on in December and we had a record snowfall month."

On the flip side, on Opening Day two years back, mountaingoers enjoyed "a ton of snow," and then didn't get much at all in December, Riddell added.

"So it's not something that we're not used to, but you try to anticipate everything that comes at you and make do with what you have available," he said.

Regardless of weather conditions, getting ready for the big day is like "mounting a campaign," Riddell said.

"Not just with snowmaking, but also our patrol and ops team working on the mountain to get the mountain ready, marking hazards, setting up rope line, doing all that sort of stuff," he said.

"It's getting our food up the mountain, making sure that we've got enough for folks on Opening Day, stocking the Roundhouse, making sure Rendezvous is good to go."

On that note, breakfast will now be offered at all of WB's on-mountain lodges, rather than just the Rendezvous, "so we're going to have some options there," Riddell said.

The Oakley Store will host a grand opening on Nov. 29 with a movie screening, goggle demo and athlete meet and greet, while the Winter Kickoff hosted by The North Face runs from Dec. 6 to 8.

The deadline for pass sales has also been extended to Dec. 2 at midnight.

"That's significant in that one of the products that we're offering in that is the Epic Day Pass," Riddell said.

"That pass product specifically gives you 50-per-cent off the ticket window price, so if you're a casual skier and you know you're going to ski maybe only one, two, three or four days, it's a good product to purchase."

Two lucky skiers or boarders in line on Opening Day (and one guest of their choosing) will also be treated to a first-class trip up the mountain—and unprecedented first tracks access.

"We're going to do an ultimate Opening Day stunt, which is to pick a couple folks out of the line and then with Blackcomb Helicopters we're going to fly them up to the Roundhouse elevation for the first run," Riddell said.

"So two lucky folks, along with two guests, will be picked out of line, weather permitting, and then we'll go from there."

The safety message for guests is the same as it has been on past Opening Days, Riddell added.

"It's the beginning of the season. Don't go out and charge as hard as you can for as long as you can. Get your ski legs under you, be mindful that the conditions are variable, [and] there is no off-piste skiing right now due to the amount of snow coverage that we have," he said.

"Our teams go out and mitigate the risk as best as possible, they're marking hazards, marking areas [that] people need to be mindful of, and so we encourage people to take it easy and be sure that they're ready for a long season ahead and not go out there and go crazy and end up hurt on the first day."