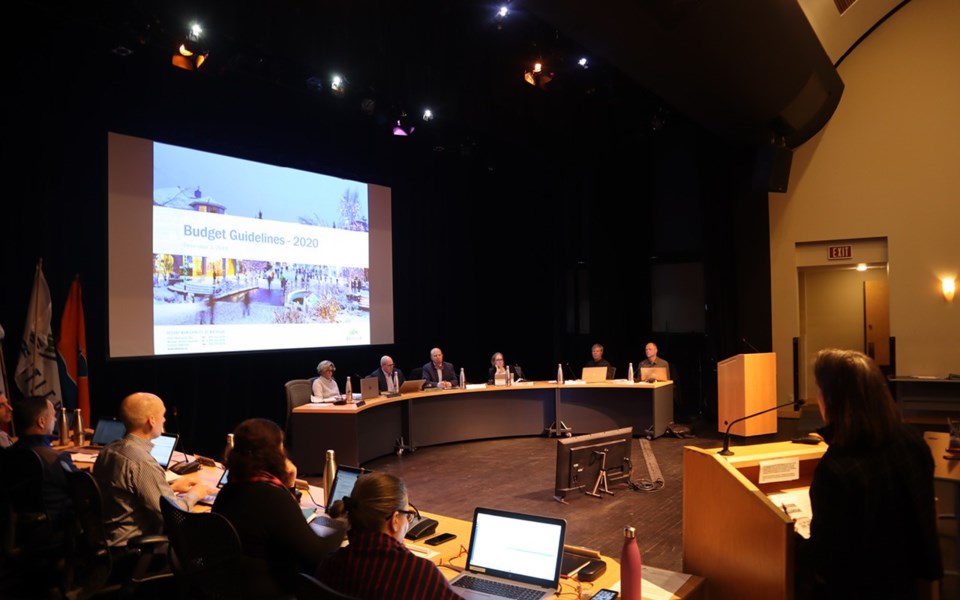 The budget is to be based on a 2.8-per-cent property tax increase in 2020, along with two-per-cent increases to sewer, water parcel and solid waste fees.

As always, individual results will vary, said director of finance Carlee Price, in a presentation to council.

"The rate of change in property taxes for each individual property will follow broadly the relative rate of change in the value of that property," she said. "A 2.8-per-cent increase applies in cases where the pace of value appreciation matches that of the community overall."

Individual property assessment notices will be sent to homeowners in January.

The changes to utilities fees and charges, which are built on a flat rate, amount to a roughly $24 increase over 2019.

The single biggest impact on municipal expenses in the general fund is on payroll, which will increase by about $973,000 this year, Price said, including $374,000 in rate increases and $292,000 in additional staffing.

"Other non-labour costs remain relatively stable, and we have this year, as in every year, found some opportunities to see those accounts move down year-over-year to see some declines," Price said.

Non-tax revenues are an important source of funding for the community, but the news there is mixed, Price added.

"We obviously find ourselves in different economic waters these days compared to this time last year. The economy is cooling, and this is most evident in declines in our permits revenue, which we expect to be down about $459,000 for the full year 2020," she said.

Sales and admissions revenue at Meadow Park Sports Centre and through other recreation programs continue to grow, as well as parking revenue, which is expected to increase by $590,000 in 2020.

But revenue from the Municipal and Regional District Tax—increased in Whistler to three per cent in 2018—is expected to cool off next year.

"2019 was the first full year that we collected that three-per-cent rate. Because no such change will be happening in 2020, and because visitation is moderating, we do expect MRDT revenues to be down in 2020 compared to 2019," Price said. "This is the first year in many that the MRDT is not increasing."

The RMOW is also planning for increased reserve contributions in 2020, she added.

"We do have aging infrastructure in the community. We are increasing our asset count for a whole variety of reasons, and those things all need to be funded over very long horizons," she said.

The lion's share of this year's proposed budget is made up of sewer and water projects, which together account for a whopping $50.4 million over the next five years.

Now in his eighth budget process, Councillor John Grills said he appreciates that the municipality "takes care of business" in regards to things like water mains, sewers and leaky parkades.

"Some of these things you could easily defer and look for less tax increases and so forth, but I think it's a pay-as-you-go type policy so that we keep the infrastructure in good shape based on today's volumes," he said.

But it's a proposal to build three bathroom buildings in Whistler Village at a cost of $4.5 million that has generated most of the budget discussion in the community.

An amendment introduced by Mayor Jack Crompton at the Dec. 3 meeting will ensure that 100-per-cent of the costs come from provincial Resort Municipality Initiative (RMI) funds, (previously an 85/15-per-cent split with the general capital reserve) meaning no impact to local taxpayers.

Council's budget deliberations also included plenty of talk about RMI itself, and where the money actually comes from.

After the meeting, chief administrative officer Mike Furey clarified provincial tourism funding sources, explaining that 18 per cent of municipal revenues are made up of provincial funding, to only be spent on provincially-approved tourism programs and infrastructure.

"This includes two distinct sources: [MRDT], which is collected by the province and sent back to many communities; and [RMI], which comes from provincial sales tax revenues and is distributed to 14 resort communities across the province," Furey said.

The provincial government committed $39 million in RMI funding over three years in its 2019 budget; Whistler got about $7.5 million this year.

Added Crompton: "Most simply, it's part of British Columbia's investment in the tourism industry."