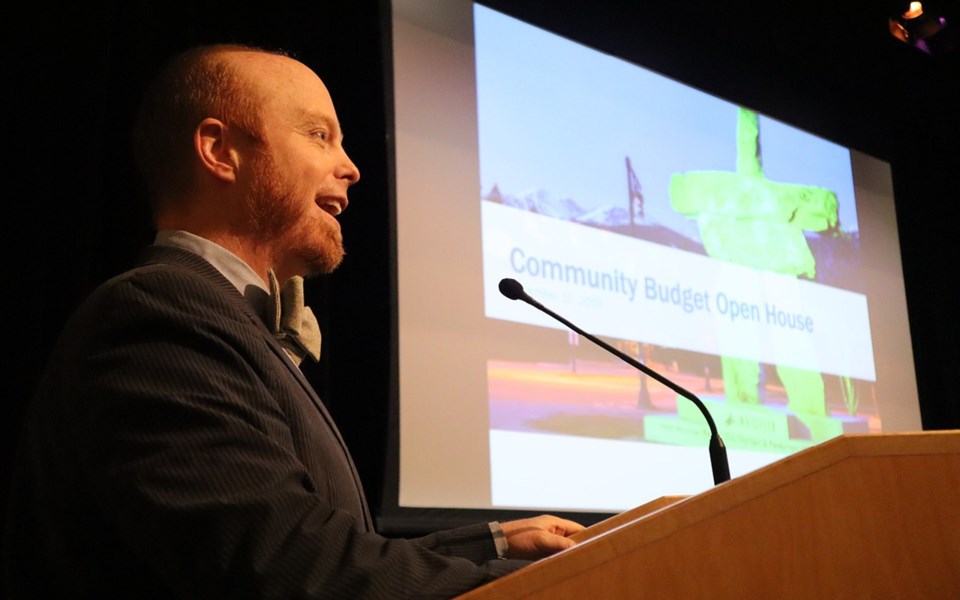 Another tax increase is in store for Whistlerites with next year's municipal budget.

The Resort Municipality of Whistler (RMOW) is proposing a 2.8-per-cent property tax increase in 2020, along with two-per-cent increases to sewer, water parcel and solid waste fees.

The details were revealed at an open house on Tuesday, Nov. 12, attended by about 30 people.

As in previous years, the relative change of the value of your property will determine whether your tax bill increases or decreases, said director of finance Carlee Price.

"So one of the reasons why we can't get specific about dollar amounts just yet is that none of you have these assessment values before you. They will be mailed out in January."

The two per cent increases to sewer, water and solid waste fees equate to an increase of $23.61 over last year's fees, Price said.

Much of the focus in the project budget is directed at infrastructure.

"Whistler is middle aged; it's time to do some knee replacements," said Mayor Jack Crompton.

"Those pipes, those below-ground infrastructure projects are critical to maintaining this community moving forward."

Now in his second budget process as mayor, Crompton said council and staff have spent a lot of time considering priorities and service levels.

"The annual budget process allows us to look at our organization's plans and priorities comprehensively to determine how to deliver them in the most fiscally responsible way. We know going into the budget every year that there are some cost pressures and some opportunities. This year is no exception," he said.

"As our community and infrastructure matures, services and costs see upward pressures, and as economic cycles fluctuate, it is a continual balancing act to ensure we are investing where we need to, maintaining the right level of services for our community and guests, and looking forward to future needs to build on our successful foundation."

WATER, SEWER AND OTHER INFRASTRUCTURE

The lion's share of this year's proposed budget is made up of sewer and water projects, which together account for a whopping $50.4 million over the next five years.

"Whistler is at an age that much of our below-ground infrastructure needs to be replaced," Crompton said.

"You can expect to see more of that type of investment over the next few years."

A new bus layby in Emerald and expansion of the layby area in Cheakamus Crossing will support expansion of the Whistler Transit System ($340,000 is budgeted over three years to complete those and other bus stop upgrades).

Whistler's Valley Trail will get lots of attention over the next five years, with extensions planned from Millar Creek to Function Junction ($1.5 million) and Rainbow to Scotia Creek ($1.025 million), as well as $685,000 for access and safety improvements and $412,000 for lighting from Alta Vista to Nita Lake (all proposed to come from the provincial Resort Municipality Initiative program—see related story on page 18).

There's also $750,000 for the Alpine Trail Program (2020 work will include establishing a working ranger station in the alpine, adding an outhouse, improving signage and buying more trail counters and wildlife cameras to assist with data collection), and $100,000 to build new (and revitalize existing) trailheads.

Complementing the facility itself is $721,697 over five years for recreation equipment upgrades and $2.12 million over five years for other infrastructure replacements (work planned for 2020 includes underground pipe repairs at Meadow Park, CO2 safeguards in the pool area, additional overhead LEDs and sound baffles, as well as conceptual design for a solar roof over the arena).

Whistler's Western toad population is getting a boost from the municipal budget, with $178,000 earmarked over four years to improve infrastructure around their spawning grounds at Lost Lake.

On waste, there is $1.58 million earmarked over five years to replace minor equipment in the composter system (as well as other miscellaneous upgrades), and to continue outreach pushing for compliance with Whistler's updated solid waste bylaw.

There's also $4.1 million budgeted over five years for community wildfire protection (which will be used for fuel thinning work) and an additional $260,000 for trail and access road upgrades to maintain the ability to fight wildfire in urban interface zones next to Crown lands.

For electric vehicle enthusiasts, there's $123,000 budgeted in 2020 for 14 EV chargers (11 in the day lots, two on the Conference Centre surface lot and one at municipal hall), with an additional $123,000 coming from provincial grants, as well as $40,000 over four years to upgrade existing chargers from single to dual port.

Making progress on the RMOW's Community Energy and Climate Action Plan has taken on increased urgency for many in the community as of late, with about 40 people attending the Nov. 5 council meeting to urge council to act.

There were some great questions at the meeting, said Chief Administrative Officer Mike Furey, but the "shared challenge" in the community is taking personal ownership of our individual impacts.

"The municipality can do a lot, but without everyone in this room really changing their lifestyles—and I know we're all hypocrites, I certainly am, around changes I need to make—but I think we need to get beyond that hypocrisy that we all feel and start owning the change," Furey said in a presentation at the open house.

"I really don't think we're there yet, and that's what we need feedback from the community on, is how we, and you, can help the community and individuals grasp that need for personal ownership and change."

AND SO MUCH MORE

But that's just the tip of the financial iceberg when it comes to Whistler's massive budget.

Other big proposed spends include (in no particular order): $9.7 million over five years for fleet replacement (including a new utilities hydro excavation truck, a front-end loader, a FireSmart chipper and more); $4.58 million for three washrooms in the village (see page 18); $350,000 for a geopark designation; $75,000 to pay for an executive search firm that will hire a new Chief Administrative Officer; $72,000 for collective bargaining with Whistler's firefighters and select municipal staff (both of which have contracts expiring on Dec. 31); $375,420 for a seismic and emergency power review; $130,000 in 2021 for the RMOW website; and $138,000 for planning initiatives (including infill housing, Cheakamus Crossing Phase 2 and a cannabis retail policy).

Find the full proposed-projects list, along with more local budget information, at www.whistler.ca/budget, and submit feedback by email to budet@whistler.ca.

If you weren't able to attend in person, a video of the presentations will be posted to the RMOW's website.

Check back with Pique in the coming weeks for in-depth looks at some of the bigger projects being considered.