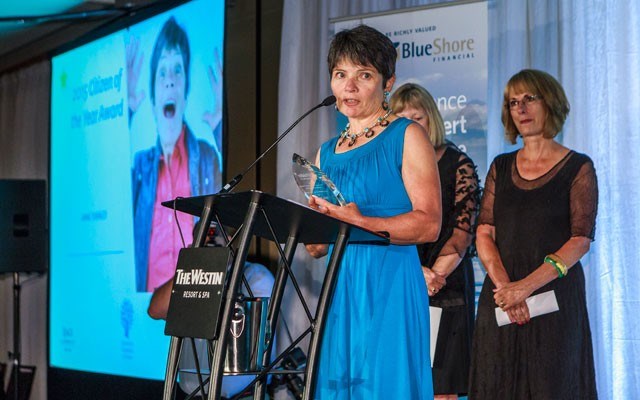 townley a fine citizen Anne Townley accepts the Citizen of the Year Award at the 2015 Whistler Excellence Awards. Photo by Joern Rohde courtesy of the Whistler Chamber of Commerce

In accepting the award for Business Person of the Year at the Whistler Chamber of Commerce Excellence Awards on June 18, Bob Deeks of RDC Fine Homes was quick to pass the praise.

"There are so many people to thank, but I think all of you recognize as business owners that the success of your business really depends on the quality of your staff," Deeks said.

"And so although I'm standing up here as business person of the year, the people who really earned this award are the people that support me every day in the business that we run. Without them this wouldn't be an opportunity for me."

It was an oft-repeated sentiment throughout the night.

As all manner of Whistler businesses took the stage to be honoured, it was more common than not to hear speeches that reflected on Whistler as a whole.

In accepting the award for Citizen of the Year, Anne Townley took a moment to thank all the volunteers of Whistler.

"In every segment of this community you will find a volunteer, and they are the backbone of what makes Whistler the very special place that it is," Townley said.

"I am absolutely thrilled and honoured and humbled to receive this award. Thank you so much to Whistler for allowing me to be a volunteer in this community."

An announced attendance of 377 was on hand to see the hardware handed out — up from about 350 in 2014. In his opening remarks, Whistler Chamber CEO Val Litwin touched on the growing appeal of the event.

"Last year we received 54 nominations in our eight different categories — and this year we collected 112," Litwin said. "I take this as an encouraging sign that as the years move by we have more and more to celebrate as a business community and just as a community period."

This year's Rising Star of the Year award — presented annually to one of Whistler's up-and-comers — netted 35 nominations.

"There is obviously something in the water, dirt and snow up here," Litwin said.

"It is so important that we come together as a community to celebrate each other, the businesses and folks that make this place tick — and the town itself. Tonight is one of the ways we keep this place special and reaffirm our commitment to being the best.

"Whistler truly is one in a million and so are each of you."

"It's apparent to me as someone who visits Whistler as often as I possibly can that you've created such a beautiful community that you are a part of," Chubai said.

This year's winners are:

Citizen of the Year — Anne Townley