Whistler could be home to its first cohousing project 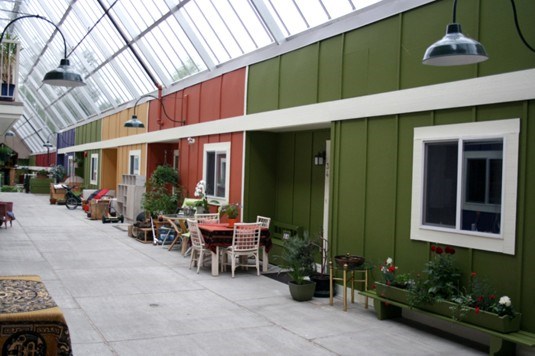 Whistler may know a thing or two about developing and maintaining affordable housing, but it's never seen a cohousing project — until now.

At a special board meeting in April, the Whistler Development Corporation (WDC), which continues to oversee the development of the Cheakamus Crossing neighbourhood, signed an $850,000 contract for a new cohousing project next to the youth hostel.

The land, Lot 14, has been sold to Forrester Homes Corporation, which is part of the development company Walk to Cohousing. It's one of a series of recent real estate opportunities in the neighbourhood, including two tentative transactions for two of the commercial units, and another potential development deal for market housing on Lot 12.

"I think part of our job is being able to respond to opportunities," said WDC board chair Eric Martin.

"It's not a normal real estate development," he said of the cohousing project.

"It very, very much depends on their marketing efforts and the ability to form a core group... of potential purchasers."

The proceeds of the sale will go directly to the WDC debt, which was $16.6 million as of February — $1.6 million owed to the Municipal Finance Authority, $15 million to the municipality. The municipality will take over the entire loan in June, when the MFA loan comes due.

"The market definitely has picked up and of course we love to see these land sales because it does reduce the debt," said Mayor Nancy Wilhelm-Morden, who sits on the board of the WDC.

"Certainly (the cohousing developer) offered to purchase the property for the value that it had been identified as having so that's a good thing.

"There was some thought that it would work well in that neighbourhood."

Cohousing may be new to Whistler but it's been around since the 1960s in Denmark, a concept not just centered around affordable housing, but also, to some extent, a way of life.

Picture private-market residences built together with communal space such as an office, a dining room, a playroom, a bike repair room. And now take it one step further and imagine living in a community where the idea of communal living can include dinner five nights a week with the neighbours, shared cars, shared gardens, shared childcare.

It may not be for everyone, admits cohousing proponent Alan Forrester, but it could be right for some, with roughly 130 cohousing projects in North America and growing.

"Intuitively almost everyone supports it," said Forrester. "But do you want to live in it?"

That's the question he wants to put to Whistler.

"I just intuitively feel like Whistler... very well might embrace this, but Whistler might not, it just depends."Certain communities seem to embrace the concept, he said, communities such as Boulder, Colorado, and San Francisco.

Forrester explained the affordability concept; not only does the common space mean that the individual house shrinks, there are also fewer operating costs because of the shared expenses.

"The price per square foot is certainly no less than market but if you are chopping off a 300-square foot bedroom and office or whatever it may be, the spaces tend to be smaller," he said.

The land does not require rezoning.

At this stage the cohousing building is expected to be made up of about 18 units in a variety of sizes ranging from studios to three bedroom homes from 300 to 1,400 square feet. It would be a three-storey building over parking.

But that all depends.

Ultimately the residents will decide.

To learn more, everyone is welcome to a public presentation on June 11 at 6:30 p.m. at the Cheakamus Crossing Boardroom, across from the hostel.

To learn more go to www.walktocohousing.ca or contact Alan Forrester at agforrester@gmail.com.