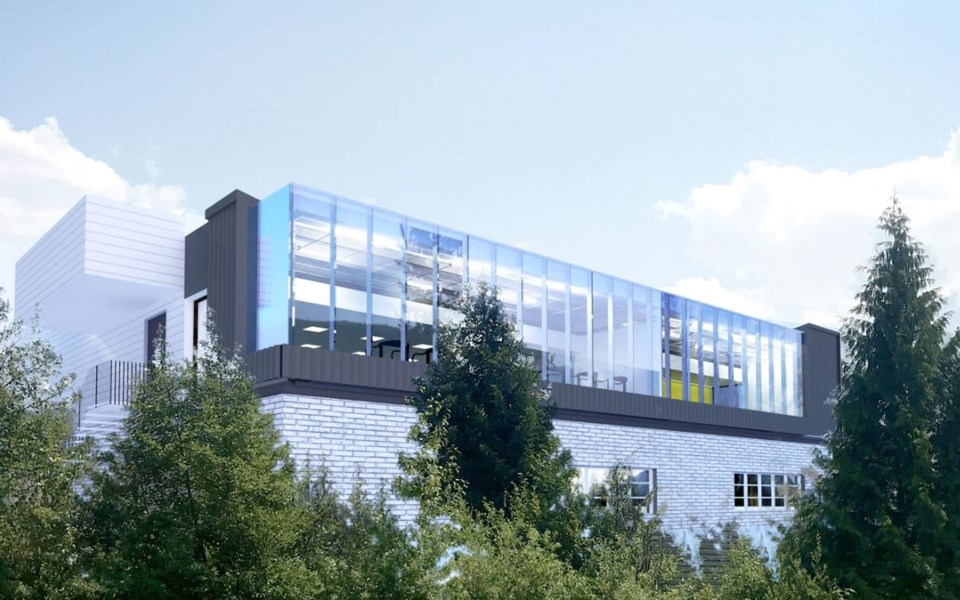 meadow park A rendering of the proposed expansion to Meadow Park Sports Centre's fitness centre. image courtesy of the rmow

Whistler council voted to award a $1.4-million contract for the expansion of the Meadow Park Sports Centre's (MPSC) fitness centre this week—a decision that prompted a call for a review of the RMOW's tender process.

At the regular meeting of council on Tuesday, June 11, the council table was divided on the decision to award the $1,419,291.27 contract to TM Builders Inc., the only firm to submit a bid.

Ultimately, the vote was 4-2* (Councillor Duane Jackson was not in attendance) with Couns. Jen Ford and John Grills casting opposing votes after an earlier motion to defer the decision failed.

The concerns over the project, which will see the expansion of the cardio room and stretching area by enclosing the facility's west rooftop patio, are primarily twofold: The cost of the sole bid, which initially came in approximately $245,300 over the original estimated cost; and the timing of a planned assessment into the MSPC's pool walls.

Andy Chalk, the RMOW's manager of facility construction, said the belief is the lack of interest in the project was due to contractors "being so busy right now that they feel they don't have time to deliver these projects," which could also help explain the raised cost of the bid. That prompted Grills to push for the project to go back out to tender at a future time when there might be more of an appetite for it.

"I think we need to look at this down the road and maybe save some funds. I don't think we should do a redesign and so forth—a lot of work has been done and we've paid those (consulting and design) costs—but I think we could save some money on timing," he said.

"They seem to have really missed the mark on labour costs in Whistler, which leaves all of us in a difficult position," he noted.

Grills would later call for a review of the tender process at municipal hall.

"There's something missing in our process that has put council and staff in a difficult position. We pay good money for consultants and there's something missing with this," he said. "I'd love to have some time spent by council ... to just look at the process of tendering, and maybe we can use this (project) as a model and see where we can make some adjustments or improvements."

The worry among RMOW staff was that, given the escalating trend of construction costs in Whistler over the past few years, there was no guarantee the project cost would decrease at a later date. There was also fear that delaying the project could jeopardize a $400,000 anonymous donation, facilitated through the Community Foundation of Whistler's Emerald Foundation, dedicated to the expansion.

RMOW staff sat down with the contractor following the original $1,534,294.64 bid to discuss ways to bring the cost down. TM Builders was able to achieve initial cost savings of an anticipated $115,000 thanks to the removal of several minor conditions, such as a site office.

In an effort to find more savings, the bidder agreed to an "alternative contract delivery model"—time and materials pegged to a stipulated maximum cost, meaning that the project could still come in below the forecasted $1.4 million.

Chalk said the contract will "enable flexibility to address unforeseen changes and will allow us to recognize savings through efficiency in project delivery."

The contractor is also bound by a performance bond to ensure the project's completion.

Common in the construction sector, Crompton said it was the first time he had seen such a contract at municipal hall.

The other major concern at the council table was expressed by Ford, who called for an assessment of the MSPC's pool walls—which were determined in a 2014 study to be potentially in need of improvements—to be done prior to the expansion.

"If you're about to start that investigation into how much work there is before we tear the roof off, and then we're stuck, I would rather understand those costs before signing off on this," she said.

Crompton said there was synergy between the two projects, as the expansion project would require "opening up the walls" and "this project helps us move that work forward."

Construction is set to begin this month, with "substantial completion" expected for spring 2020, the RMOW said.

*An earlier version of this article incorrectly stated the vote was 3-3, not 4-2. Pique apologizes for the error.