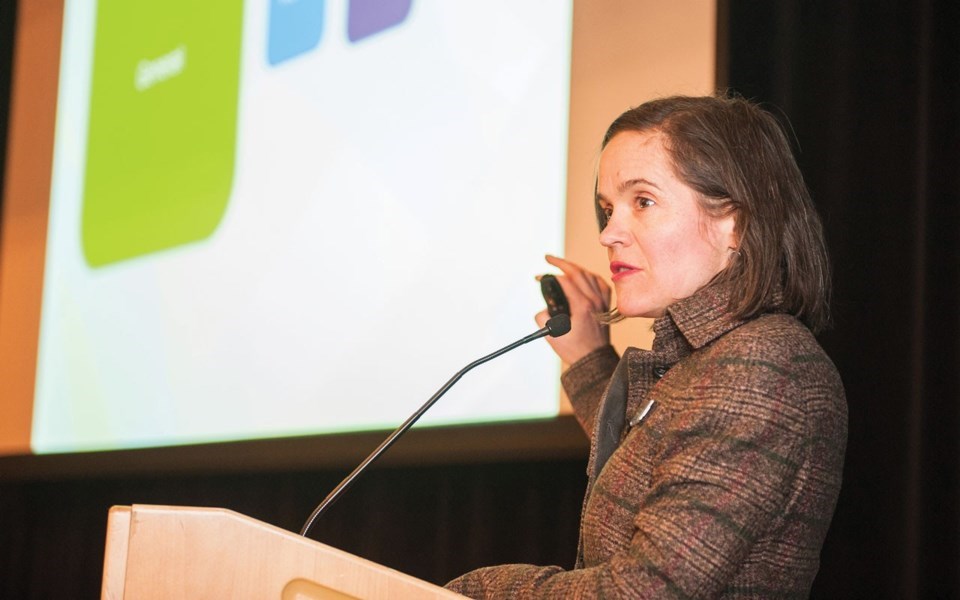 Director of finance Carlee Price at a budget open house in 2019. File photo by David Buzzard/www.media-centre.ca

The Resort Municipality of Whistler (RMOW) is reversing course on a proposed 4.89-per-cent tax increase, opting instead for an increase of 1.08 per cent in 2021—but the move will have significant tax implications down the line.

The change is made possible by higher-than-expected revenues, cuts to expenditures and more than $3 million in COVID-related restart funds from the provincial and federal governments, said director of finance Carlee Price in a presentation to council on Dec. 15.

But it will require a draw on reserves—a move overwhelmingly supported by the community during budget consultations this year—to make it happen.

The RMOW’s general reserves funded by taxes have been flat for six years, Price said, while the value of community assets—all of which will eventually need to be replaced—has continued to grow.

“So we’re losing some of our ability to properly appropriately care for these assets,” Price said.

“That can feel less urgent for the individual than facing a $50 tax increase in any given year, but we can’t lose sight of it. Our fiscal responsibilities as a community always relate to existing economic realities; in this year those realities are overwhelmingly influenced by COVID.”

Concerns about declining household income and businesses on the brink are real, and the RMOW has been asked to help support the community, Price added.

“We believe we’ve done that,” she said.

“However, the costs associated with that approach are real and enduring.”

The RMOW’s consolidated debt balance is forecasted to increase to somewhere between $55 million and $93 million by 2023 (from a starting point of $40 million in 2019), Price added.

What’s not clear is exactly how big future tax increases might be.

Asked about the damage at the Dec. 15 meeting, Price stopped short of offering numbers, but did invoke Whistler’s infamous financial struggles c. 2009, when the council of the day was forced to raise taxes 20 per cent over three years.

RMOW staff is working on a comprehensive asset management plan that will help with specific forecasts, but in the absence of a more detailed answer, “they need to go up, and they need to go up by a fair amount,” Price said of reserve balances.

A further $856,000 in savings was found by deferring some projects (like $140,000 for kennel upgrades at Whistler Animals Galore) and reducing the scope of others (like spending $75,000 less on community wildfire protection).

“Without that own-source funding through higher taxes, this program does draw exclusively on operating reserves, and spending from reserves, which are under significant pressure,” Price said.

The 1.08 per cent increase will equate to an increase of about $16.81 on a property assessed at $1 million, Price said, though she added that one per cent tax increases are not sustainable in the long run.

RMOW property taxes went up an average of 2.13 per cent from 2010 to 2019, Price noted, compared to an average of just over three per cent for other communities in the Lower Mainland.

It’s the second time the 2021 budget has had to be re-imagined, after COVID blew a hole in the original plans back in March (see Pique, May 7: Whistler council stays the course on 2.8% tax increase”).

Council was enthusiastic about the re-revamped budget, and the savings found by Price.

“Ms. Price captured our community message very well when she said this is a year to focus on recovery, and a reserve drawdown is understandable,” said Mayor Jack Crompton.

“I feel good about this budget being referred to as a recovery budget, and I acknowledge that there is work to do in the future, and municipal reserves will require contribution moving forward for the RMOW to retain financial health.”

There are no changes to sewer, solid waste or water fees.

The five-year financial plan bylaw is scheduled for first readings on January 5, followed by the tax rate bylaw in April.