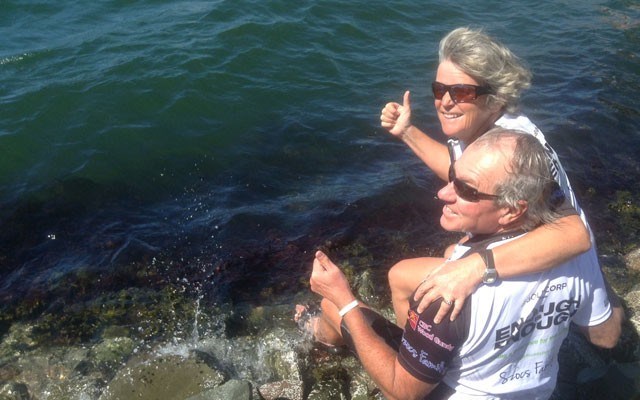 THUMBS UP: Kerry and Ginny Dennehy dip their toes in the Atlantic Ocean at the end of their cross-Canada bike ride and fundraiser for mental health treatment. A Whistler celebration will be held, Aug. 29 at the Plaza at noon. Photo Submitted

The donation was announced Wednesday at the Vancouver rally, on the eve of Kerry and Ginny Dennehy's final leg of their journey home to Whistler. All are welcome to attend the homecoming at Whistler Olympic Plaza on Thursday Aug. 29 at noon where Szocs will speak, along with the Dennehys.

The couple of have been on a cross-Canada bike journey for three months. With the Szocs' donation, the campaign has raised close to $2 million. The goal of the campaign is to remove the stigma associated with mental health issues like depression.

"I feel one of our strongest areas where we can all make a difference is reducing the stigma of depression," said Szocs.

"My funds will be directed in that direction as I believe everyone can carry the torch in this effort."

Ginny Dennehy called Szocs, who was on the board of the Kelty Patrick Dennehy Foundation for five years, a leader in the cause.

Szocs has had a place in Whistler since 1981, retiring here full time in 2000 after selling his successful business to his employees. He was the founder and president of Norpac Controls Ltd., a process control firm, named a number of times as among the "50 Best Managed Private Companies in Canada."

Szocs said: "I have been very impressed with Ginny and Kerry's dedication to the cause of depression... Yes, you can make a difference."