Whistler digs in its opposition of GAS 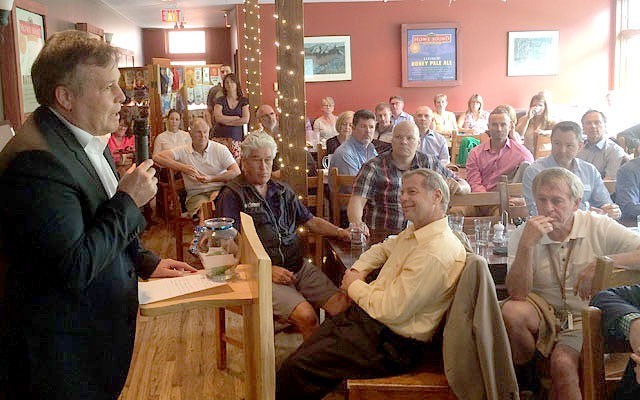 Presenting the case for GAS David Negrin, CEO of the proposed Garibaldi at Squamish project, talks about the new ski resort at last week's Chamber of Commerce luncheon in Squamish. Photo by Braden Dupuis

If Whistler loses just 10 per cent of its tourism spending, the consequences will be far-reaching, with local revenues plummeting $130 million and government tax revenues dropping by more than $10 million annually.

And a new four-season ski resort 30 minutes away could create these outcomes and more, with ramifications beyond Whistler's boundaries.

"We are a cornerstone of the provincial tourism economy," said the Resort Municipality of Whistler's (RMOW) CAO Mike Furey, in an interview outlining his concerns about the proposed Garibaldi at Squamish ski resort — a large-scale, multi-billion dollar project on Brohm Ridge, just north of Squamish.

This is not about protecting Whistler, he said, as it generates $1.3 billion in provincial GDP every year, an estimated 22 per cent of the tourism export revenue, and more than $1.1 million a day in tax revenues for all levels of government.

There is more at stake, said Furey.

"We believe the GAS proposal will damage the province's reputation as a provider of world-class tourist destinations, and compromise the established and substantial economic contributions of Whistler, surrounding communities, and other B.C. destination ski resorts, by weakening economic output and deterring private investment," said Furey in a submission to the provincial government's Environmental Assessment Office.

But, the proponents say rather than compete with Whistler, GAS will complement it.

At a Squamish Chamber of Commerce luncheon on June 18, the project's CEO spoke about the relationship between GAS and Whistler.

"We want to work with Whistler (and) we want to complement Whistler," said David Negrin, CEO of Garibaldi at Squamish.

"I could not compete with Whistler. There's just no way we could ever think of that. If we did we'd be out of business."

Speaking to a crowd of about 75, Negrin showcased some of what the project could offer.

"We want it to be an all-season, on-mountain, slopeside resort community," he said. "It will be a resort mountain for people who enjoy the outdoors for all seasons and that's extremely important."

But the assertion that a new ski resort on the Sea to Sky highway wouldn't compete with the Whistler product didn't sit well with representatives of Whistler in attendance.

"I think obviously they're trying to paint a picture of the feel-good side of the project, but you know, the Whistler Chamber of Commerce still remains very concerned, not just for the implications to Whistler, but the implications for the entire corridor," said Whistler chamber CEO Val Litwin after the presentation.

"We really didn't get into the nitty gritty of some of those socioeconomic impacts that are of huge concern to us."

Some of the concerns Litwin mentioned included access to quality labour and traffic congestion.

"I appreciate that there's maybe some positive intent behind it, but when you look at the proposed development there's no way it can't directly compete with Whistler," Litwin said.

"We're going to (potentially) have now 22,000 bed units 20 or 25 minutes south of Whistler, and you know there's going to be an effect on our market when that happens."

Whistler mayor Nancy Wilhelm-Morden said the presentation was interesting, but shared some of the same concerns as Litwin.

In his detailed eight-page submission to the province, Furey laid out Whistler's concerns, many of them shared by Whistler Blackcomb in its own submission. Furey focused on the socio-economic impacts of the project as it related to its supplementary environmental assessment.

At the heart of the issue is not just the ski resort, but the volume of housing proposed. Garibaldi at Squamish is set to bring 1,350 new hotel rooms as well as more than 1,000 resort condos, 825 multi-family units and almost 1,500 single family lots.

The GAS proposal states this will not have an adverse impact on Whistler, which operates at just over 50 per cent occupancy year-round.

Whistler views it differently according to its submission; adding more than 22,000 bed units will only drive prices down, dilute the product, cannibalize from the resort's guests. This in turn will drive off investor confidence.

"Whilst GAS' proposal does not anticipate any impacts, at approximately 30 minutes' drive from Whistler, it is undisputable that the availability of this much accommodation will have a negative impact on room rates and occupancy levels in Whistler as well as other B.C. resorts," said Furey.

The project, he added, is not part of the Regional Growth Strategy (RGS), a document that was years in the making by all regional stakeholders. Unilateral approval of GAS at the provincial level without the unanimous approval of the regional district impacts all other projects in the approved growth strategy."This not only intimidates the Regional District Board, but also undermines their authority and limits their ability to pursue their own agreed upon growth plans," said Furey.

The public submission period is now closed with comments posted on the EAO website. Many withheld their personal information but did not hold back on their views about the controversial development, financed by Vancouver-based Aquilini Development & Construction and Tom Gaglardi's Northland Properties Group. There were submissions on both sides of the debate.

Richard Zimmer of Garibaldi Highlands expressed his support for the development.

"I would love to see GAS go through," he wrote. "I have met so many people that need to commute to Whistler or Vancouver for work. I believe this will fill the much need job void in Squamish. As well are considered the outdoor recreation capital of Canada it makes sense."

The Environmental Assessment Office is considering all input on the supplemental environmental application in the coming months.

Negrin stressed that there are still several steps remaining before the project becomes a reality — including a rezoning process that would include more time for public comment.

"If this project does get an Environmental Assessment (certificate) issued, it is your choice at the end of the day whether this project goes through or not," he told the lunch attendees.

"And we have to continue to do a better job of working with you to understand what this project is about and how we go forward."

The process — and the legacy — should be viewed on an extended timeline, Negrin said.

"This is a 20-year build out. It's not one that's going to happen overnight," he said.

"It will create more than 660 fulltime jobs, 200 full-time indirect jobs. The importance here is that this is not something in Squamish that you're just going to build and leave, it's going to create jobs in the future for your children."

Meanwhile, the RMOW is hiring a company to examine the impacts of Garibaldi at Squamish on the traffic on Highway 99, attempting to understand how increased congestion and travel delay could impact the guest experience in Whistler.