Sherri Fleck’s DockDog takes on canines from all over North America
Dec 14, 2013 5:15 AM By: John French 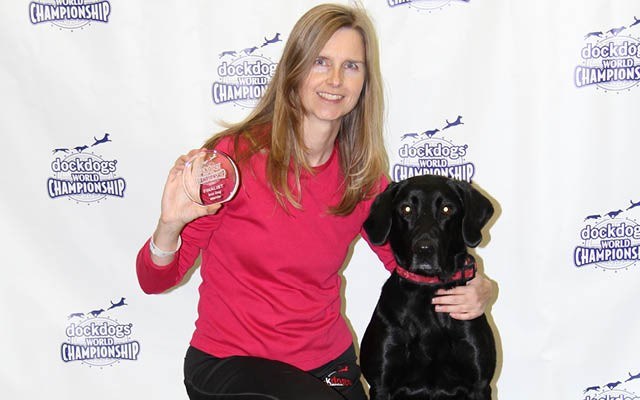 Sable the world-class DockDog competitor took a road trip to Dubuque, Iowa to participate in the 2013 World DockDog Championships and came back to Whistler with a sixth place finish.

Sable’s handler, Sherri Fleck, said she was blown away by her dog’s performance at the competition. The pair flew to Winnipeg where Fleck met up with her father. The trio drove 12 hours from Winnipeg to Dubuque in a minivan with Sable perched on a bench seat for the long drive.

“I usually have her riding in the crate,” said Fleck. “We did up the back seat for her and she was riding like she was royalty. She had the whole back seat to herself.”

The competition was held at the Five Flags Arena in downtown Dubuque. Fleck said there were three competition pools and a fourth practice pool in the arena.

Sable went into the Iron Dog Warrior competition against 28 other dogs in her grouping at the world championships. After preliminary competitions the top six advanced to the finals. Fleck’s black Labrador retriever qualified in third place.

Ahead of the finals the organizers played the Canadian and American national anthems and Fleck said Sable spotted the bumper she retrieves so she barked through both songs in anticipation of the jumping she knew was on the way.

A Cheasapeake Bay Retriever from Utah named Kona placed first with 2,979.40 points — more than 100 points ahead of the second place canine. Fleck said the winning dog was in a class of its own.

The competition was the last one of the season for Sable. Water training for Sable will begin again in April once the ice thaws from the lakes in Whistler. Fleck said she will work on creating a DockDogs club in Whistler during the off-season. “We’ll service everybody in B.C. until such time as more clubs start up,” said Fleck. The idea of creating a club in Whistler generated a great deal of interest after the successful DockDogs event in Whistler this summer. Fleck said a number of people put their names on a list this summer so those potential future club members will be contacted this winter.