I Clean Commute offers incentives to individuals and businesses to hop on an eBike
Jan 25, 2017 5:00 PM By: Brandon Barrett 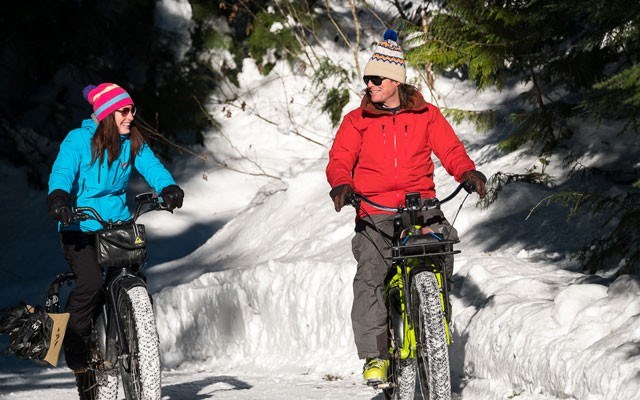 It took only four pedal strokes for local Dave Heighway to realize he needed to own an electric-powered bike.

"The first time I hopped on one of these bikes, I bought it 10 minutes later," he said. "It's like you're going downhill everywhere, it's like your legs are Lance Armstrong's."

Now, Heighway and his business partner Cory Leis are on a mission to "bikify North America" through the company they just launched, I Clean Commute, and they see Whistler as the natural starting point.

"Most people don't make that much money in town, so there are very few ways to try to improve your financial situation," Heighway said. "Having a car in this town is easily one of the most expensive things you can do with your disposable income."

Heighway also appreciates the "convenience factor" of eBikes, particularly after a tiresome ride or long uphill climb. "As soon as you're going up a hill or carrying a bit of stuff — a case of beer, groceries, your skis or whatever it happens to be — going up that hill is all of a sudden an arduous task," he said. "(eBiking) doesn't take away from your recreation or your exercise of biking, but it keeps you from reaching for the keys when you're too lazy to get on your bike."

There's also the ever-important environmental factor. Passenger vehicles still account for nearly 60 per cent of Whistler's overall greenhouse gas emissions, and the municipality's Transportation Advisory Group continues to look at ways to get more people out of their cars.

"(Whistler) can be a frustrating place because you're trying to do the right thing for the environment, but everywhere you look, it seems almost hopeless," noted Heighway. "This is a way to feel good about your lifestyle."

In a town that loves its mountain bikes, Heighway recognizes the challenge in convincing Whistlerites to hop on an electric bike. He believes it requires something of a cultural shift, and held up Denmark — where he did his post-grad studies — as the model.

"In Denmark, the bike is just a tool, just like your vacuum cleaner," he said. "Biking for 90 per cent of the people there has nothing to do with fitness or recreation or anything like that, it's just to get around."

Part of eBikes' popularity in Europe can be attributed to the incentives many governments offer towards the purchase of a standard or electrical bike. In the U.K., for example, the government offers to pay up to 25 per cent of the cost of a bike that's used to cycle to work.

"Nothing like that exists in North America. But those incentives really work," said Heighway. "Whether or not you're a capitalist or a socialist, it's hard to argue that market incentives don't change people's behaviour."

That's why Heighway wants local businesses to be a part of the solution. I Clean Commute is encouraging employers to pitch in a minimum of five per cent towards the cost of a discounted eBike for staff members. The company also offers a 25-per-cent carbon rebate to individuals who become I Clean Commute ambassadors.

"In the absence of government (incentives), it's a great opportunity for businesses to take the lead on doing the right thing for the environment," added Heighway.