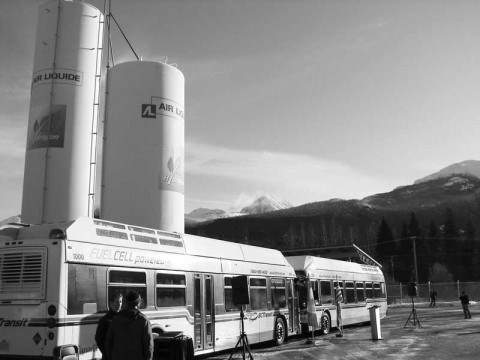 Residents take note: if you want a say in Whistler's development, this is your chance to be heard.

Over the next year, anyone living in Whistler will be able to add their two cents to the community's future as the Resort Municipality of Whistler updates its Official Community Plan (OCP).

Kevin Damaskie, sustainability coordinator, said the municipality is trying to get as many people involved in the process as possible.

"There will be no one left out of this OCP update process," Damaskie said Monday during a presentation to local media. "We are going to try to be as innovative as possible so people feel encouraged to be part of this process."

Questions like whether industry should be allowed to operate near Nesters, as opposed to Function Junction, will likely be part of the discussion, explained Damaskie.

Also, how the resort municipality will remain financially viable into the future and how the natural environment can be protected could be on the table.

To kick off the conversation, a survey will be distributed in May. Residents can identify what issues they want dealt with during the community plan update.

The survey will coincide with a public meeting held in May with the Whistler 2020 annual Apres in Action get-together, where citizens can further voice their thoughts.

Also, this month the municipality will begin putting together a 20-member advisory group from the community to guide the update. The group will be made up of 15 people from the Whistler 2020 taskforces, four people nominated by the community and a youth representative, aged 13 to 18 years old.

"We are hoping young adults 19 to 35 want to put their names forward for the other four seats so we get a good demographic cross section of applicants for council to review," said Damaskie.

The municipality will also have on-line forms available at their website for people to fill out at any time.

Damaskie explained the OCP as a set of high-level plans and policies covering things like land use planning, social, economic and environmental policies and civil infrastructure investments. The plan is required by the province's Local Government Act .

The last update was done 17 years ago, in 1993, when Whistler was still in a development phase.

At that time, the village had not been completed, Spring Creek did not exist and Creekside had not been redeveloped. In some respects Whistler was still climbing out of the financial slump left by the recession of the early 1980s.

This time around, not only has Whistler reached build-out, but an overarching visionary document, Whistler 2020, has been put in place that broadly defines the community's goals for the foreseeable future.

"This is going to be a lot of fun," said Damaskie, about the potential to update the OCP at this point in Whistler's history. "This place has nothing but opportunity and is filled with passionate citizens that are filled with ideas."

Damaskie said a large part of the OCP update process will involve implementing objectives set out in Whistler 2020 into on-the-ground policy. Also, 63 other policy documents that have been created over the past two decades will be folded into the plan.

"The update isn't about creating a new OCP, but about bringing all the policies together," said Damaskie. "These are policy and tools already in place and already working in our local government."

This year's update will be led by Mike Vance, general manager of policy and program development at the municipality. Every department of the municipality will have a representative on the coordinating team, said Damaskie.

The Whistler Centre for Sustainability will also be heavily involved - working out of their existing $190,000 annual contract with the municipality to oversee Whistler 2020. The centre's main duties during the OCP update will be to engage the community.

The municipality may also hire consultants if necessary.

The reason the OCP has not been updated since 1993 is because Whistler has been busy developing the Whistler 2020 sustainability document as well as preparing and hosting the 2010 Winter Olympics, said Damaskie. He added, however, the community plan has been updated as needed by council over the years.

The Resort Municipality of Whistler plans to update the OCP every five years, as recommended by the provincial government.

Residents can expect to see more information on the OCP update process at Whistler.ca, as well as on Twitter, Facebook and e-newsletters.