Directors of cancelled contests looking to satisfy registrants while planning for the future
May 10, 2020 4:15 AM By: Dan Falloon 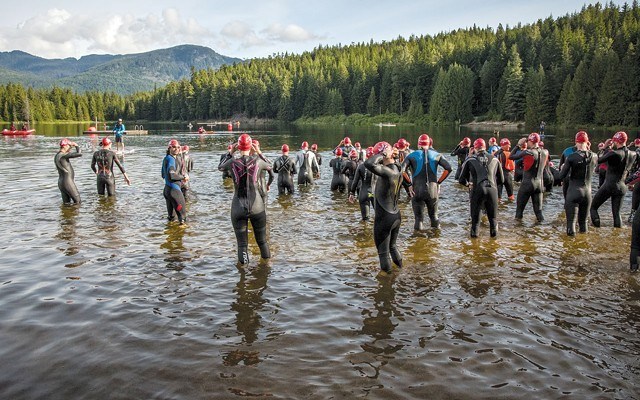 As more events drop off the 2020 calendar, Whistler's race directors are crunching the numbers and trying to find an acceptable compromise for registrants.

In some situations, races have been cancelled and refunds have been sorted, while others are holding out some hope of safely running sometime before the summer is through.

The Whistler X Triathlon, originally scheduled for June 14, was one of the first to call off the contest this year, making its announcement in late March.

Race director Dale Tiessen said Triathlon BC ultimately made the decision to cancel for them, saying that their insurance organization would not sanction any events for a certain period, including into June when the race would be held.

"It was an insurance and sanctioning decision, made on our behalf, which was a good thing," he said on May 8.

Before the cancellation, Tiessen was looking at ways to hold the race within the guidelines of the day, and had initially capped registration at less than 250 at a time when that was the maximum gathering size. The rules changed, and quickly, he had to make a decision, ultimately decided it was best to regroup and try again in 2021.

"Not knowing what was going to happen, and with my own personal schedule, I didn't feel it was a wise idea to try to re-schedule in the year," he said, adding that uncertain access to the course locations was also a factor.

Tiessen said each registrant's fee would carry over into 2021 unless they specifically requested a refund, which about 30 racers-just over 10-per-cent-opted to do before the cut-off date. Most, he said, were in circumstances where they would not be able to race the event in 2021 and were given their entry fee less $10 and the CCN registration cost.

"Once we looked at what our sunk costs were, we were only in for $10 per person for registrants," he said.

Tiessen credited some suppliers, such as medal maker North Shore Billet, for making some allowances.

"They had made all of my medals," he said. "Chris [Allen] there said, 'No problem, I can hold this easier than you can. You just catch me next year. I've got them all ready to go.'

"That's a substantial cost, close to $1,000 of medals, and they're all custom made for our event. It's not like he can sell them to someone else."

Meanwhile, Comfortably Numb co-director Kristian Manietta hasn't shifted from the current date of June 20. While he's not expecting to run on that date, there's a delicate balance to strike when selecting a new time to potentially run if it is safe to do so, noting that it's not feasible to keep bumping the date in response to ever-changing conditions.

"I think June is gone. I can safely say that. But then we're just trying to work out when we can and what's available," he said on May 8. "How many weekends have we got? When can we do it? What does that look like?

"Is there a possibility of having groups of 30 or 40 do a rolling start, spacing it out that way, and then not having a gathering after? You finish, you get your medals and stuff and then you're done," he added.

Manietta and co-director Dean Eggleton took the race over last year and ran it successfully, though they are now looking to navigate the possibility of not holding a 2020 event.

"Dean and I with Comfortably Numb try to keep our overheads low and try and give a lot of value. We ain't getting rich from it and we're working our other jobs," he said. "This is more of a labour of love and passion, and in saying that, we want to do what's right with our community and customers."

The race is currently offering a 50-per-cent refund or full deferral to 2021 for those wary of competing this summer, though many are riding things out, Manietta said.

"The majority are happy to stay the course. We've only refunded a couple of people, but obviously, that will increase a little bit once we get closure on this or if we have to unfortunately cancel, but we're trying not to let that happen," he said.

Manietta has worked with other events including Ironman and the Whistler X Triathlon, but also races and has been on the other side. He noted one American race he'd registered for this year only offered a $75 credit toward 2021 registration.

"And this was a few-hundred-dollar race," he said. "If you didn't want that, you could get your race T-shirt or that, or you could donate that back in."

Manietta donated back in, noting that the race's future would be in peril if all participants took the credit, while athletes would lose a qualifier to bigger and more prestigious races.

"These are small businesses that are hurt by this situation, unfortunately," he said. "I think the whole event industry, whether it's races or concerts or whatever it is, is going to be in a lot of hurt.

"It's going to take a while to recover from this."

Meanwhile, Geoff Langford of Coast Mountain Trail Running, the company behind the Squamish 50 and the Survival of the Fittest, both in Squamish, and the Whistler Alpine Meadows race is in a different situation. It has cancelled the bulk of its schedule, but is leaving the Whistler race on its schedule for Sept. 25 to 27, for now at least.

Langford explained that the nature of WAM differs from the Squamish 50 in that it's more of a locals' race whereas the Squamish 50 sees a higher degree of international travel and potential transmission risk.

"It still seemed to be a long shot up until a week ago," he said on May 9. "Everybody's keen to see it happen and, from a runner's perspective, it would be nice to have at least one event this year."

The trail series had made some pandemic-related precautions in advance of the mid-March Cap Crusher contest before calling it off in the days beforehand, so some ideas of how to hold a race in the changed world are already being bounced around. Still, if the race happens, the details will need to be consistent with Ministry of Health direction, and it's unclear what that will look like months from now.

"We had spent a lot of time looking at how to adjust and modify and make things safe and then two or three days before the event was supposed to take place, it became clear that it just couldn't happen," he said. "We're having a look at everything from how many people [can we have at] and how do we structure the start line ... to how do we execute aid stations? We have a 100-mile (160-km) race in that event, so you can't just eliminate aid stations and expect people to be self-sufficient."

Langford noted in a follow-up email that since the event is five different distances broken down over three days, it avoids large clusters already, and there are plans to keep starting packs to 50 people or fewer.

Langford has been in touch with race directors across the country, participating in virtual town halls to get a sense of how others are riding out the pandemic.

In order to support races all over the continent, the trail series sold headbands online, and has raised more than $28,000 for roughly 120 different organizations.

"We wanted to do something that was community-based and we didn't want to be, 'Oh, help us!'" he said. "This was something we could do for the community as a whole and let people direct the proceeds to whoever they wanted to.

"Sixty-five per cent of the buff sales went to a huge variety of organizations across North America, not to us, so what was awesome to see," he added, noting several participants declined the offered credit and plan to register fresh in 2021 to help support the series.

Meanwhile, the series' other co-director, Gary Robbins, recently completed a 100-mile run with a goal of raising $5,000 for local search and rescue (SAR) organizations, but surpassed $15,000 in the end.

Supporting community groups is a major part of the series' M.O., and though there likely won't be the same level of contribution this year, Langford said the group is aiming to provide a boost to SAR and trail-maintenance groups currently feeling the pinch.

"We're trying to come up with some creative ways to make that happen," he said.