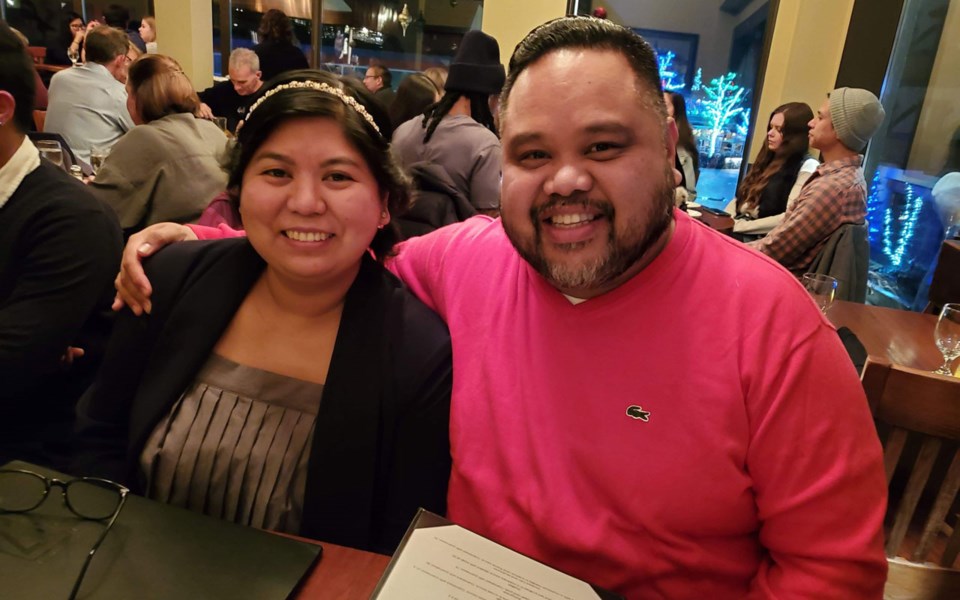 Instead of spending as many precious moments as possible with his terminally ill wife, Arthur Santiago is battling bureaucracy to try to fulfil her final wish.

The Whistler man is attempting to find a way for his wife Charie’s sister and niece to visit her one last time.

With strict government restrictions during the COVID-19 pandemic, however, only Charie’s mother has been approved for a visit at this time, making an in-person reunion between Charie and her sister, April Untalan, also her best friend, increasingly unlikely.

Though they video chat daily, it’s just not the same.

“I don’t blame anybody. It’s because of COVID and I understand that. I’m not opposed to what they’re trying to accomplish to keep us safe,” he said. “But, honestly, I don’t even know what to say anymore. I reached out to so many people.”

A July 30 denial letter Santiago provided to Pique said: “Based on our assessment of the information you provided and the information in our system, we have not found that you meet the immediate family member exemption.”

Santiago subsequently reached out to everyone he could think of, appealing to MP Patrick Weiler, federal Immigration, Refugees and Citizenship Marco Mendicino, the Canadian Ambassador to the Philippines and provincial MLA Jordan Sturdy.

The common response to his pleas is that someone else is responsible.

In a Sept. 24 email, an Immigration, Refugees and Citizenship Canada spokesperson said: “We know this has been a difficult time for families and others who are making their way through the immigration system. COVID-19 has had an effect on travel around the world,” the spokesperson wrote. “Ms. DeGuzman Untalan and Ms. Untalan both possess temporary resident visas that were issued in 2019. However, they are unable to travel to Canada at this time as they do not meet any of the exemptions to the current travel restrictions. They are not considered to be immediate family members.

“Currently, there are no exemptions from the quarantine requirement or from the travel restrictions for reasons, such as visiting a critically ill loved one.

“The government continues to look at ways to reunite families and others who are separated by the temporary COVID-19 measures.”

In hopes of making a difference, a friend launched a petition on Sept. 24.

The one glimmer of hope is that Charie’s mother completed her 14-day quarantine with Santiago’s sister in Port Moody on Sept. 24.

“If she quarantined with us and something were to arise, getting into a hospice might be an issue,” Santiago said. “If she did have COVID and I got sick, if I got it, then me and Charie would need to be separated, which cannot happen right now.”

Charie was first diagnosed with Stage IV ovarian cancer two years ago and uterine cancer shortly afterward. She underwent chemotherapy, responding well to treatment, but after suffering severe back pain in March, doctors discovered the aggressive cancer had returned and spread, with radiation causing a tumour near her spine to flare up, leaving her paraplegic.

“She doesn’t have much time. She’s getting weaker every day,” he said.

Whistler Immigration successfully secured visas for Charie’s mother, sister and niece last year, and they came for a visit at that time, said consultant Laurie Cooper.

When Charie’s condition took a turn for the worse this spring, the pandemic was already in full swing when the family looked to come over once again.

“After COVID, only immediate family members were allowed to get visas to come and visit, and that includes parents, but it does not include siblings,” she said. “Whistler Immigration submitted a request for an exemption … for all three of them to be able to come in.

“They did get permission for the mother, but not for the sister and niece.”

After that, Cooper said, the organization reached out to the office of MP Patrick Weiler to see if he could wield any influence with the governing Liberals.

“They did agitate on behalf of Charie and her family but, obviously, without success,” Cooper said.

Weiler’s office did not respond to a request for comment prior to press time.

Cooper, who previously advocated on behalf of Syrian refugee Hassan Al Kontar, who was stranded for months at a Malaysian airport before his asylum claim was granted and he came to Canada, also contacted Immigration, Refugees and Citizenship Minister Mendicino and Canada’s Ambassador to the Philippines, Peter MacArthur. She also contacted the Philippines’ visa office, which asked for more information, which she then provided, but hasn’t heard back after a subsequent request for more information three weeks ago.

She said the situation is frustratingly similar to her advocacy on behalf of Al Kontar.

“I never did get any reaction from the ministry’s office or the MP [Pamela Goldsmith-Jones at the time],” she said.

Santiago said he’s appreciated the community’s support during this difficult time, crediting not only Whistler Immigration for taking on the case pro bono, but for Double Diamond Law, Nesters Pharmacy, Mayor Jack Crompton, every nurse that has cared for Charie and his neighbours for lending a hand.

“My neighbourhood is full of amazing people, dropping off food and showing that they care,” he said. “As big as we’re getting, we’re still a small community and we support each other.”

And, through tears, describing Charie as a caring, compassionate person, Santiago said she’s been there for him during her illness.

“We’re kind of opposites,” he said. “If it wasn’t for her, I’d be over the edge already.

“She tries to keep everything positive.”