Hundreds line up at Whistler Village Gondola on first day of ski season
Nov 22, 2014 2:45 AM By: Brandon Barrett 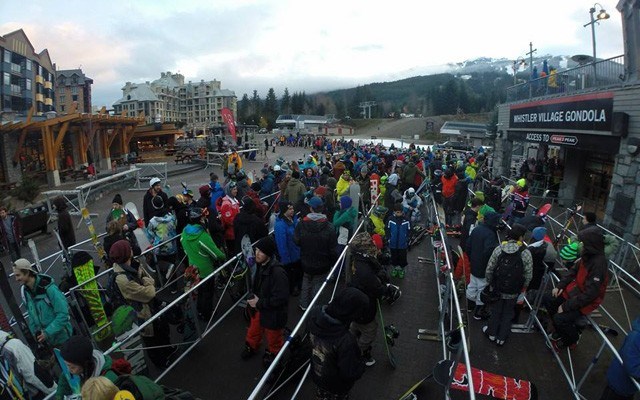 EARLY BIRDs Hundreds came out to be the first on Whistler Mountain Saturday, Nov. 22, the first day of ski season. The Emerald Express, Big Red Express and Franz Chair lifts will be operational today. Photo by Jon David

There’s stoked, and then there are the Bathgate brothers, who, along with a few friends, camped out for over 40 hours this week to get first crack at the mountain on opening day.

Parked in a tent since 1 p.m. Thursday, Nov. 20, the teens have been coming early to camp out ahead of opening day for several years, and wanted to make sure they were first in line this time around.

Battling rainy conditions and complete boredom, the crew has tried to keep the mood festive while waiting for the gondola gates to open with their fellow riders.

They’ve also had some help along the way, thanks to the kindness of fellow Whistlerites who have kept the boys warm and their stomachs full.

“It’s been cold but people have been coming by to give us free snacks and give us support,” said Liam Peiffer. “Lots of free food.”

Only minutes before the 2014/15 ski season kicked off, and all Cooper Bathgate could think of was hitting some lines and hopefully “getting some face shots.”

“I brought my new pow skis so I can hit (Air) Jordan first,” he beamed.

While he may not have been as eager as the Bathgates, 42-year-old Vancouverite Morgan Davidson was no less excited to drop in for his 23rd ski season in Whistler. What’s got him most stoked? “More backcountry,” he said.

“There’s not many places in the world where you can ski top to bottom this long. I haven’t seen half the mountain and I’ve been coming here over 20 years.”

Blackcomb will open as planned, along with the Peak 2 Peak, on Nov. 27.

There are lots of first this season for skiers and riders at Whistler Blackcomb, including a new touchless gate system meant to reduce wait times and lift-ticket fraud, as well as the new eight-passenger cabins on the Whistler Village Gondola. The $6-million project replaced the lift’s current cabins, which have been loading guests since 1988, with more comfortable seating, reduced vibration and noise over lift towers, and equipment storage space outside the cabin.

“I’m excited that the seats aren’t really bad,” said Mitchell Long of the new cabins. “There are better seats in the gondy now, it’s pretty sick.”

The last upload Saturday is at 2 p.m. Visit www.whistlerblackcomb.com for more information.