Whistler Naturalists' annual event returns this week to shine a spotlight on all things mushrooms
Oct 12, 2020 7:05 AM By: Megan Lalonde 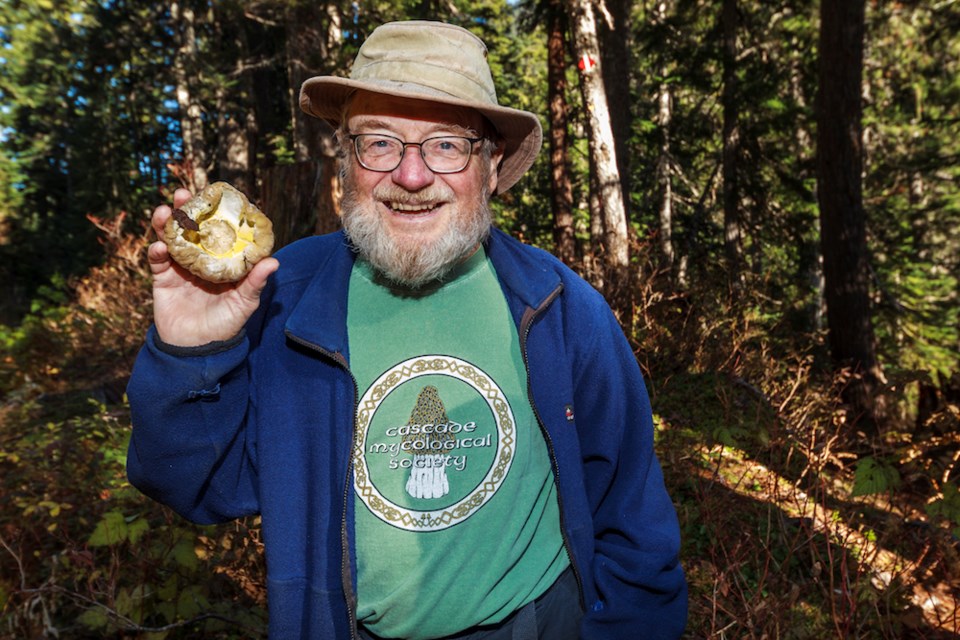 Mycologist Bryce Kendrick is pictured foraging in Whistler in 2018 during the annual Fungus Among Us festival. Kendrick is set to deliver a talk about the wonderful world of fungi during this year's (virtual) iteration. Photo: Joern Rohde/www.joernrohde.com

The Whistler Naturalists have been putting the fun in fungus for nearly two decades.

But in an effort to comply with COVID-19 protocols this year, the local organization is taking the fun—and the fungi—online.

The 18th annual Fungus Among Us Mushroom Festival is set to take place virtually this week, on Oct. 16 and 17, bringing together aspiring mycologists and respected mushroom experts from a distance.

One perk to hosting the Festival virtually? Eager participants won't have to worry about tickets to popular events selling out, as has become commonplace in recent years.

“Since we usually sell out our events, going online this year means nobody will be disappointed that they couldn’t get tickets,” said Kristina Swerhun, one of the Festival's organizers, in a release.

In addition to a new format, the Festival is also launching a new photo contest for this year's event, with numerous prizes up for grabs.  Photo categories for the Fantastic Fungi Photo Contest include Captivating Colour, Weird and Wonderful, Already Occupied (for example, slugs, bugs, and the like), Mushrooms Magnified, and Fungal Fun (people and mushrooms). Photo submissions must have been taken between Oct. 1, 2020 and the contest's deadline, Thursday, Oct. 15 at 5 p.m.

Prizes will be doled out for top photos in each category, decided by a panel of judges that's set to include local pros Joern Rohde and Andy Dittrich.

Rohde even prepared some tips to help aspiring mushroom photographers get the best shots, available on the Whistler Naturalists’ website.

On Friday at 7 p.m., Fugus Among Us will present "Talks with Gurus," featuring a variety of short presentations. Talks are set to include“A natural and cultural history of magic mushrooms in BC” presented by Andy MacKinnon and Paul Kroger, Veronica Woodruff sharing the story of an enthusiast’s journey—including a slime mold cameo, and Bryce Kendrick talking about the wonderful world of fungi. Judges will also announce the winners of the new  Fantastic Fungi Photo Contest during this event.

The following day, on Saturday from 4 p.m. to 6 p.m., chef Bruce Worden will host an event focused on cooking and preserving wild mushrooms.

"Have you ever wanted some inspiration on how to prepare wild mushrooms in mouth-watering ways? Or wondered how to preserve mushrooms to use throughout the winter?," The Whistler Naturalists explained in a release. "Join Chef Bruce Worden as he shares his in-depth knowledge of everything having to do with foraging and eating mushrooms and preserving the wild." During this live virtual event, Worden—General Manager of Whistler's Milestones restaurant, chef and all-around mushroom guru—will share recipes and answer questions from the audience.

Participants will be able to pose questions via Facebook and Zoom chats during presentations, while both 2020 events will be available for anyone to watch—though the Whistler Naturalists say donations are welcome. (More details and log on instructions can be found here.)

Despite a new format, the local organization hasn't abandoned the scientific portion of Fungus Among Us. However, that research will be carried out by a much smaller (and physically distanced) crew of visiting scientists, the organization explained. "After 17 years of fungi surveys and more then 900 fungi on the Whistler Biodiversity Project list, it’s amazing that scientists are still finding new species every year. It really speaks to the complexity and diversity of our natural world," read the release.

Local schools will also be welcomed to join in on the fun: The Naturalists have prepared a special Mushroom Scavenger Hunt and accompanying video aimed at students, "to get kids excited about mushrooms and the important jobs they have in nature," the organization stated, while mushroom "gurus" will be available to answer high school students' questions during virtual presentations with local classes.

For more information about the festival, check out the Whistler Naturalists' website.