Whistler gets in the giving spirit

The community gave back in a myriad of ways this holiday season
Dec 21, 2016 5:00 PM By: Brandon Barrett 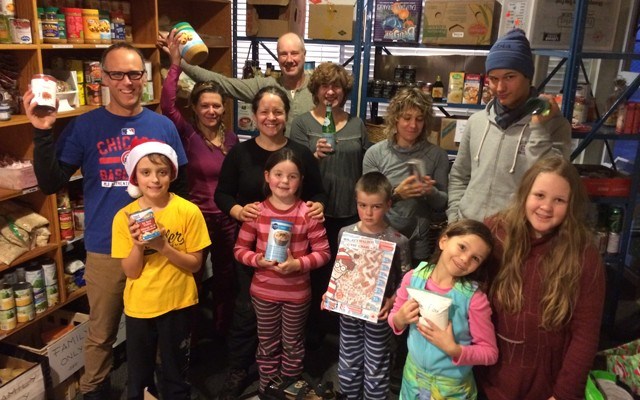 For a town as generous as Whistler often is, it should come as no surprise that the giving kicks into high gear once the holidays hit.

Residents gave back in a myriad of ways this festive season, and one of the main beneficiaries was the Whistler Community Services Society (WCSS), which operates over 26 social programs in the resort, including the food bank and Santa's Helpers Christmas Hamper initiative.

"We feel really lucky this year that we've had so many businesses jump on the bandwagon," said outreach manager Jackie Dickinson.

Volunteers quite literally jumped on the bandwagon thanks to the Help Santa Fill the Bus fundraiser held on Dec. 11 in support of the food bank and the hamper program, which this year will provide around 40 families with presents, food, and other much-needed items for the holidays. VIP Whistler Transportation helped organize the event, which saw a bus travel to several different locations around town, where volunteers packed in 419 kilograms of food and 70 toys. Nearly $900 was also raised.

The Fairmont Chateau Whistler was another major donor to WCSS. Every December, the hotel organizes an inter-departmental competition to bring in the most non-perishable items for the food bank. This year, 317 kg of food were donated, along with four boxes of toys and some cash.

It was a boon during a holiday period when the food bank's pantry was looking barer than usual.

"The shelves are looking a lot more stocked now," said food bank coordinator Sara Jennings. "It still stands that we're looking a little lighter than previous years, but it's at least starting to feel like it normally does at this time of year."

The Fairmont's generosity also afforded the food bank a chance to galvanize the outpouring of support it regularly receives at this crucial time of year. On Monday, Dec. 18, the food bank hosted its first Family Volunteer Night, welcoming half a dozen families who helped unload the Fairmont truck full of donations.

"Families want a way to give back at this time of year through volunteer work, and there are often very limited opportunities for them to assist us, so we chose a night when there was going to be lots going on," said Jennings.

As the community's thoughts turn to the less fortunate, Dickinson was quick to remind that there are plenty of "real ways" for people to support WCSS throughout the year. Volunteers are welcome to the food bank every Monday from 10 a.m. to noon, and those with FoodSafe certification are needed to cook hot lunches on Mondays as well for food-bank clients, staff and volunteers. Residents are also encouraged to donate to the Re-Use-It Centre, which helps fund all WCSS programs.

Warm clothing is especially needed during the winter months, particularly this year when many are feeling the impacts of Whistler's housing shortage.

"We are definitely spending more time stocking the Whistler Fire Department, the Visitors Centre and our team with warm socks and additional layers for people who may be finding themselves out in the cold more than the rest of us," Dickinson said. The WCSS has seen a rise in demand for its Taxi Program, which sends those in need to Squamish's emergency shelter free of charge. As of mid-December, around 25 people had travelled to the shelter, compared to 20 last year and less than 10 in 2014 when the program began.

Over at the Community Foundation of Whistler (CFOW), the non-profit is encouraging residents to shine a light on the good deeds of others in the community through its UnSelfie campaign. Tag your Facebook or Twitter post until Christmas Day with the #WhistlerUNselfie tag.

"I still hear people make comments that they'll judge a charity based on how much money they spend on overhead or administrative costs. They don't want to see their money go to that sort of thing, but in fact research has shown that it's important charities do invest in training, staff, infrastructure, etc. in order to be effective," she said. "The important thing is to look at what the impact (charities) are having on the community. Are they transparent in their reporting? And for donors, first and foremost, do they speak to your values and what you believe in? Is their mission meaningful to you?"

No matter how you give back, no act of charity is too small, Dickinson said.

"Sometimes we associate volunteering with a large time commitment or a big monetary donation, but it's the simplest and smallest things that have the power to make the most difference," she said. "So what I would say to people around the holiday season is: do what you can, give what you can, because it's enough. It really is."