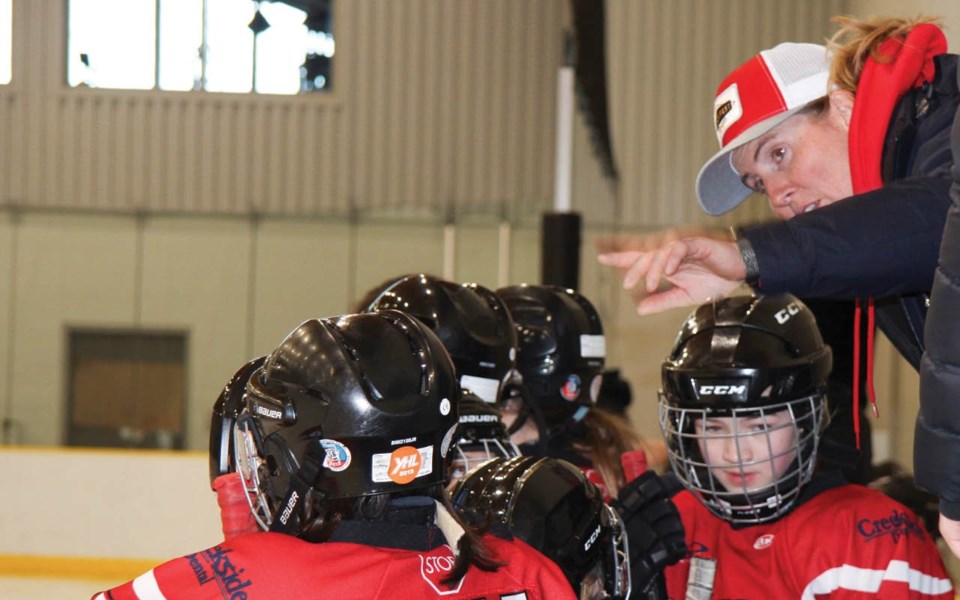 Squeezing their sticks tighter than usual, hearts pounding in chests, 17 girls from the Whistler Winterhawks Female Atom C1 team finished their on-ice warm up Saturday morning and skated over to the bench, looking up at their coach who had just arrived.

The team, made up of girls ages nine to 11 years old, had been counting down the days to this moment, nervous smiles now spreading from under helmets, all eyes firmly trained on one person. After all, it's not every day that you get coached by the best female hockey player in the world.

From the bench, Hayley Wickenheiser smiled back and leaned in—a secret communion between hockey players over the shared love of the game.

Eleven-year-old Annie Akehurst, who wears Wickenheiser's No. 22 on her back, remembers it all. In fact, she will likely never forget it—the excitement of seeing Wickenheiser on her bench, the nerves of playing for her in the game ahead.

"She said, 'Try your hardest, skate fast, try to get one goal at a time,'" said Akehurst.

The buzzer sounded; the puck dropped. With one loss and one win in hand, day two of WickFest—the Hayley Wickenheiser Female World Hockey Festival in Surrey from Jan. 31 to Feb. 2—was now firmly underway for the Whistler Winterhawks, the first all girls' hockey team in Whistler in more than a decade.

Now in its second year in Surrey (and a decade in Calgary) WickFest 2020 brought together 1,500 female hockey players for three jam-packed days of hockey, off-ice activities, on-ice development and the opportunity to meet Wickenheiser herself.

The Whistler Winterhawks had the added bonus of having Wickenheiser coach their bench after the team raised more than $1,500 for Jumpstart, the Canadian Tire charity that helps kids play sport by removing financial and accessibility barriers.

"I'm very proud of you for raising that kind of money," Wickenheiser later told the team in a special meeting with the Whistler girls. "You helped kids play hockey."

The six-time Olympian (with four gold medals and one silver to her name) was generous with her time throughout the weekend, stopping for thousands of photos and autographs, sharing stories of the game and perhaps most of all, the story of how she became the best, growing up in small town Saskatchewan in the early '80s, skating on her backyard rink with the neighbourhood kids.

"I thought I was the only girl in the world who played hockey," she said. "Unlike you girls who haverc girls' teams to play on, I didn't have that."

Instead, she had years of dressing by herself in washrooms, separate from her team; years of walking alone through arenas full of judgment, full of critics; of the seminal moment too when she was 15 years old and playing AAA Bantam hockey and was cut...because she was a girl. Make no mistake, it was an often lonely journey blazing that trail.

Still, those hardships never overshadowed her absolute love for the game.

Battling on the ice

Back on the ice and down by three in the first period, Wickenheiser rallied the Whistler Winterhawks, encouraging them to use their bodies, play smarter, hold on to the puck a little longer, be tougher.

"I've been in lots of games like this girls," she told them, breaking down the game: Win a battle. Win a shift. Win a period.

The losses are just as important as the wins, she said later that weekend. In her entire career playing hockey—a career that spanned more than two decades in which she racked up the most points for Canada with 168 goals and 211 assists in 276 games—Wickenheiser said she lost probably as many as she won. There were disastrous hockey seasons, like the lead up to her sixth Olympics, playing on a broken foot, where the team lost more than half their games that season, most by one or two goals.

And then there was Nagano, the first year women's ice hockey hit the Olympic stage. Wickenheiser was 19 years old when she stepped onto the ice at the '98 Olympics, the expectations of a nation on the team's shoulders, simply expected to bring home the gold for Canada. Canada lost to the U.S. 3-1. The sting of that 20-year-old loss is still fresh.

"I hope you lose tough games," she told the Winterhawks. "It's going to make you tougher and more resilient."

Questions for Wickenheiser abounded: Why did she pick No. 22? Wayne Gretzky was 99, Mark Messier was 11, the Edmonton Oilers of the '80s were her childhood heroes. Her best friend was 2. The double digit just seemed like the right fit.

Any advice to get better? Watch the NHL, she counselled. Watch the best players. Watch how they cross their feet and how they protect the puck. Watch, for example, how for every two strides Edmonton Oiler Connor McDavid is crossing his feet, giving him power, speed, edge. Then practice what the best are doing.

And where does she see herself in 10 years?

She hopes WickFest will have expanded into other cities; she hopes to still be working in hockey (Wickenheiser is currently assistant director of player development for the Toronto Maple Leafs); and she hopes to practice emergency medicine (she is now in her final year of medical school).

"A lot of people say you have to do life in a certain way," she said. "I couldn't disagree more.

"Chase your dream no matter how crazy it sounds."

The road to playoffs

The Winterhawks finished WickFest with a win, a tie and two losses. And unforgettable memories of meeting their hockey hero who lived up to all the hype...and then some.

WickFest was a defining moment for Winterhawks assistant coach Trevor Burton, who has two girls on the Female Atom C1 team.

"Just watching the level of play at the Bantam and Midget level, it was mind-blowing how fast they were, how well they controlled the puck and controlled the play," he said, with a nod to Whistler's 16-year-old Jenica Felius, who volunteers on ice with Whistler's Atom Female team and who was also playing at WickFest for her team, the North Shore Avalanche.

Perhaps, Burton admitted, he had never really put the women's game at the same level as the men's game; WickFest changed that, flipped that old mindset on its head.

"It's here. It's arrived. And it's just the perfect time to be involved with it all," said Burton. "And that's really exciting."

WickFest was the final competition for the Winterhawks at the end of their regular season before playoffs begin next week.

Editor's note: Alison's daughter plays for the Winterhawks girls' team, while husband Jeremy is the head coach and helped launch the team, which is in its first season of play.