RMOW will also power down municipal facilities and non-essential lights in the community
Mar 27, 2019 9:00 PM By: Brandon Barrett 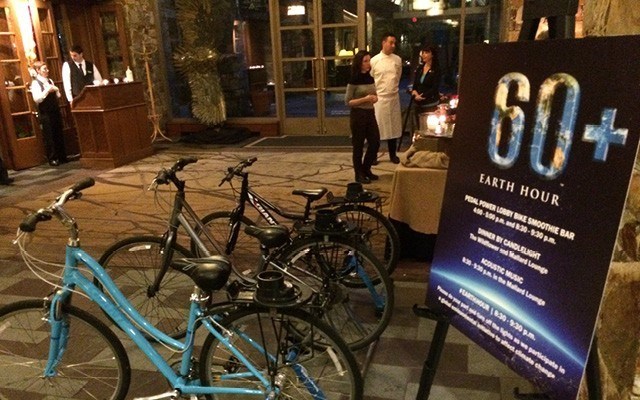 Whistler will mark its 12th Earth Hour on Saturday, March 30. For several years, guests of the Fairmont Chateau Whistler celebrated the event with pedal-powered blenders that made healthy smoothies. File photo by Braden Dupuis

Whistler will join communities around the world in marking Earth Hour tonight by powering down between 8:30 and 9:30 p.m.

Earth Hour was founded by the World Wildlife Fund more than a decade ago, when 2.2 million people and more than 2,000 businesses turned off their lights for an hour to draw attention to energy consumption and its impact on the environment.

This year will mark the 12th time Whistler participates in Earth Hour. For two years in a row, 2014 and 2015, Whistler recorded the largest energy savings, per capita, in the province.

The Resort Municipality of Whistler (RMOW) will take part by turning off non-essential lights and powering down municipal facilities in the community.

“Earth Hour is an opportunity for us to demonstrate the impact of taking small steps for just one evening to reduce our energy consumption,” said Mayor Jack Crompton in a release. “I encourage all residents, visitors and businesses to unplug, switch off, power down and find creative ways to reduce energy consumption during Earth Hour on March 30. I also challenge everyone to get inspired and take steps beyond Earth Hour to reduce their personal energy consumption every day.”

The RMOW offers a $250 incentive to residents who complete an energy assessment of their home. Learn more at whistler.ca/powerdown.

In partnership with EfficiencyBC, the municipality also provides up to $4,000 in rebates to residents who upgrade to a heat pump in their home. Learn more at efficiencybc.ca/incentives/whistler-municipal-heat-pump-top-up.

For the first time in a decade, British Columbia actually saw electricity use increase during the 2018 event, continuing the five-year trend of Earth Hour’s declining participation. BC Hydro says electricity use rose by 0.2 per cent province-wide.

Meanwhile, as a community, Whistler’s overall greenhouse-gas (GHG) emissions and energy use continue to trend in the wrong direction.

While Whistler averaged GHG reductions of about 3.8 per cent annually from 2008 to 2012, the resort has averaged a 4.7-per-cent increase in total emissions each year since 2014.