Whistler has its work cut out for it on EV charging 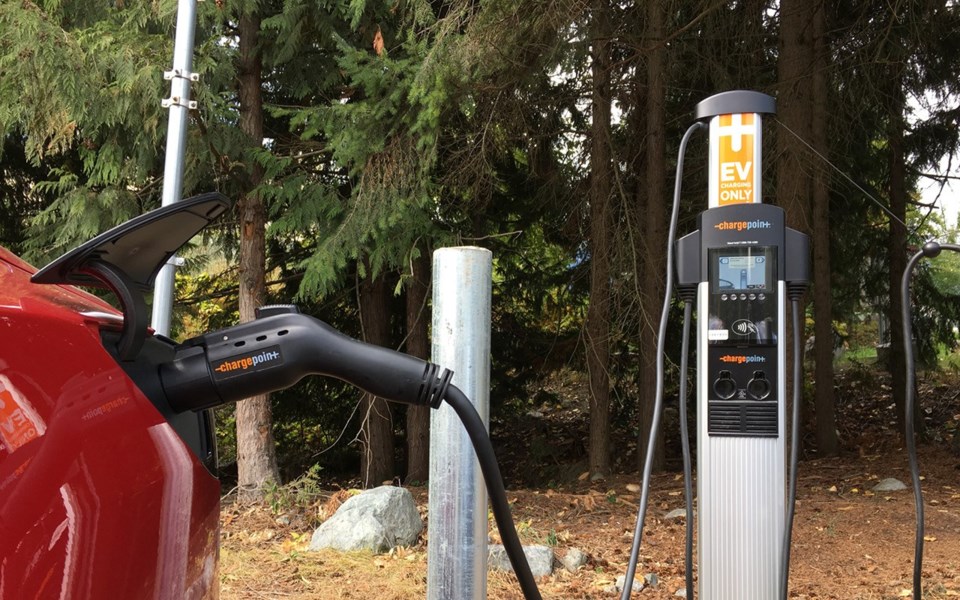 CHARGE IT Whistler is looking to increase the number of electrical vehicle chargers in the resort—but hurdles remain. Photo By Braden Dupuis

With a law to phase out gas vehicles now making its way through the provincial legislature (the Province of B.C. is eyeing 2040 for the switch to electric vehicles) and British Columbians buying electric cars at an astonishing rate (about 1,300 orders were placed over two weeks in May compared to a total of 3,270 in all of 2017, according to the New Car Dealers Association of B.C.), the Resort Municipality of Whistler has its work cut out for it in providing chargers for electric cars.

"Right now in Whistler we have 15 publically available EV chargers ... [which covers about] 0.24 per cent of the summer and 0.15 per cent of winter parking spots," said environmental stewardship manager Heather Beresford, in a presentation to council on Sept. 3.

"Those seem like awfully small numbers to me, and we would like to be able to improve that."

Beresford was on hand to seek council's support for an application to Natural Resources Canada's Zero Emissions Vehicle Infrastructure Incentive Program for up to 50 per cent in matching funding for 14 dual-port Level 2 charging stations.

If successful, the project would add 28 new charging stations to the resort (though some existing chargers will be replaced): two dual-port Level 2 chargers in Lot 1, four in Lot 2, four in Lot 4, two at municipal hall and two at the Whistler Conference Centre.

The RMOW's share of the funds would come from the Climate Action Revenue Incentive Program (CARIP) and day lot capital improvement funding, while other cost-sharing opportunities are also being explored.

The Day Lot Committee will cover the annual electricity cost from its revenue.

The CARIP is a rebate for municipalities that have signed on to B.C.'s Climate Action Charter, allowing them to reclaim all of the carbon taxes they have paid each year for direct local government operation costs.

"We get about $50,000 a year back on that, and have been challenged to find projects to spend it on, but this is a great one," Beresford said, adding that $60,000 for the project will come from the CARIP, while the other $60,000 will come from the day lot capital improvement fund.

"The idea is to wrap the EV charger installation into some larger day lot parking improvement projects that are going to be taking place in 2020," she said.

Though council ultimately supported the application, Councillor Ralph Forsyth voted against it.

"I'm not sold on the entirety of the argument. I want to achieve the goals, but I don't want to label or saddle the taxpayer with the ongoing cost, and more importantly, the moral obligation to provide this service in perpetuity. Because there's no exit strategy for us," Forsyth said.

"When there's 1,000 lots in the day lots, and all the cars are electric—on this model, we're paying for all of them, and I don't see any scenario that gets us out of it. So for those reasons, I'm not going to support it."

Ted Battiston, general manager of corporate and community services, noted that, depending how empty the battery is, charging costs somewhere between 50 cents and $2.

"Two dollars would be about as hard hit as you could ever get hit by somebody showing up bone dry and then topping the entire battery," Battiston said.

"So just to give you a sense of the costs, and that those are relatively small given the amount of charging this early on in the adoption."

The charging ports are expected to last between eight and 15 years, and the system can also be restructured as things change in the future, Battiston added.

"When the evolution is to a point where people are expecting to pay for electricity, they can be converted, and they're future proofed for that, to collect revenues at some point in the future," he said.

The additional chargers are needed, said Coun. Jen Ford, though she would like to see more.

"The No. 1 reason people say they can't go to an electric vehicle is because of the range—range anxiety," Ford said, noting that during a recent tour of some car dealerships, dealers were "actively talking me out of an electric vehicle, because, 'Oh, you live in Whistler, you'll never make it up the highway.'

"Which is frustrating, because we want to move in that direction."

Though the 28 new charging ports won't vastly increase Whistler's charging capacity, a more long-term strategy is on the workplan for this year, Beresford said—a fact that was encouraging to Coun. John Grills.

"The early days of computers and cash systems ... you would find out a couple of years later after your large investment that it's now obsolete and you're taking it out, so I'm glad there's thought into maybe seeing up to 15 years, potentially, for some of these pieces," he said.

"It's very encouraging, because it seems like it's developing so quickly and just the volume, we hope, will grow as well."

But supplying electricity for new chargers will continue to be a barrier moving forward, Battiston said.

"As we've looked through the parking lots, the day lots, these were locations that did support significant installations, but it isn't easy to just pick spots wherever and believe that there is enough ampacity to support these additional chargers," he said.

"Over the last 10 years when I've been working on the project, it has been one of the barriers to installing more of them, is not having sufficient electricity on site or ampacity on site to support the additional load."

Further, BC Hydro won't allow the installation of more capacity unless municipalities can prove they can use it, said general manager of infrastructure James Hallisey.

"So even though some of the stuff in the day lots is pretty new, there isn't much additional capacity there already waiting around, because hydro just doesn't do things that way," he said.

"Unless they know you're going to use it, they just won't give it to you, which sometimes is a little frustrating to us, but it is their overall management scheme and it probably keeps the price of electricity around the province down."

"I would say I don't think because we've participated now means that in the future they can't pick up increasing costs, and I hope they will," Crompton said.

Many people in the community who are purchasing electric vehicles are living on a budget, and working hard to be part of the transition, the mayor added.

"I hope that this infrastructure is something that helps them participate," he said. "It's exciting to imagine a future with broad, community-level charging infrastructure and many of our community members using electric vehicles, so I'll be supporting the resolution."