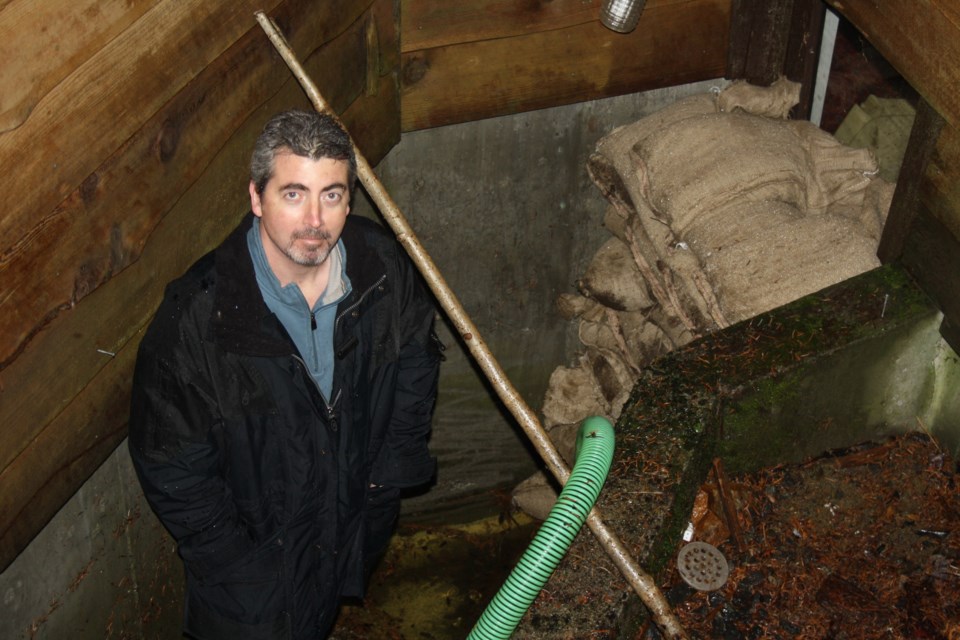 UNDER WATER The basement of John Murphy's home was completely flooded on Wednesday. Photo by Braden Dupuis.

The rain may have stopped, for now, but some in the Whistler area have been left drenched by Wednesday's downpour.

John and Elena Murphy saw the basement of their Crabapple Dr. home fill completely to the ceiling with water.

They were alerted to the flooding by one of their tenants in the early afternoon on Wednesday.

"I came around to see what was going on, and I've never seen anything like this in my life," John said.

"The creek had funnelled its way straight towards our house, and it was just pouring down into the basement."

John followed the stream through his backyard and out onto the Valley Trail to find its source - Crabapple Creek at the Whistler Golf Club.

"The creek was just a bubbling cauldron," he said.

"It was just out of control. It was erupting."

Elena contacted emergency services at the Resort Municipality of Whistler (RMOW), which sent fire services to try to contain the flooding.

"I was astounded at how many people kept coming, kept helping. It was an amazing response."

Nevertheless, the Murphys' basement is ruined, and the family of four is now left looking for answers.

"The social services will keep us going for two more nights, so after that we're like, '"What do we do?'" John said on Thursday.

On Friday morning the Murphys were still pumping water from their basement, and waiting to hear from their insurance company.

"So we're looking at that, and we're still hopeful that they will see mitigating circumstances and be able to cover it, but we just have to wait and see."

Bridie Marshall, the Murphys next-door neighbour, was in Vancouver when she got the call from the RMOW telling her that her home was flooding.

Marshall said she was happy with the RMOW's efforts to contact her, but was otherwise unsatisfied with the answers she got.

"They seem to be saying it's an act of God and that's how it is, even though it was on their land," she said.

"We really want answers as to why this was allowed to happen and what the RMOW is going to do to stop it happening again... we are left feeling that the RMOW is not treating this situation as seriously as we think it deserves."

In Pemberton the flooding was only a concern in isolated areas, said Mayor Mike Richman, including a few homes in the Glen and a number of units in the Pioneer Junction complex.

"The rivers this morning all looked a lot tamer once the rain stopped last night, (but) we've still got sandbags and pumps all over Pioneer Junction," Richman said.

"Wednesday night was the usual Pemberton show," he added with a laugh.

"Half the community was out there sandbagging and they made short work of it. It was a good scene."

Pick up next week's Pique for the full story.