The June 21 vigil honoured eight Indigenous Canadians who have lost their lives in police-related incidents since April
Jun 22, 2020 9:39 AM By: Megan Lalonde 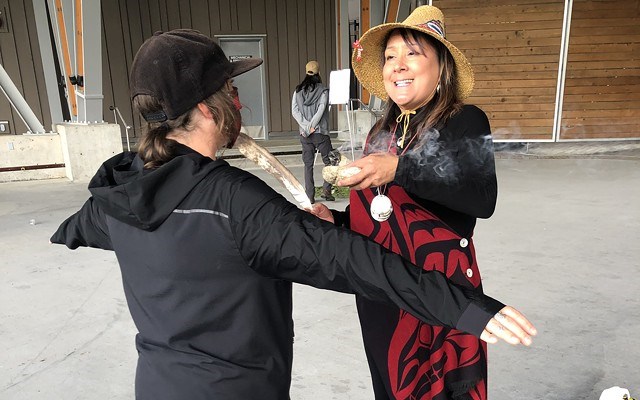 While the occasion is officially intended to be “a day for all Canadians to recognize and celebrate the unique heritage, diverse cultures and outstanding contributions of First Nations, Inuit and Métis peoples,” this Indigenous Peoples Day took on a particularly somber tone: With an increasingly bright spotlight shining in recent weeks on police and the communities who disproportionately suffer at the hands of law enforcement—sparked largely by the death of George Floyd—the gathering on Sunday also served as a vigil to honour the eight Indigenous Canadians who have died in police incidents since April 8 of this year.

So when the small crowd clustered in a horseshoe formation on Sunday, protected from the day’s drizzly weather under the plaza’s overhang, eight easels, each displaying a face and a story, filled the space between attendees and vigil organizers Linda Epp and Steve Andrews: Eishia Hudson; Jason Collins; Stewart Andrews; Regis Korchinski-Paquet; Everett Patrick; Chantel Moore; Rodney Levi; and Abraham Natanine.

Those who attended the vigil observed eight minutes of silence—one for each of the above-listed names.

Two hanging red dresses, a haunting symbol of the countless missing and murdered Indigenous women in Canada, served as a backdrop.

“Together we are part of a movement for social change, ” Epp, a First Nations activist and organizer of Whistler’s Sisters in Spirit Vigil, told the crowd.

“This is the day that we need to stand up, understand and support all Indigenous people of Canada. We need to take action and make this a stat holiday—with your voices, we can do this together, but let’s do it together. Let’s not divide anymore, let’s only unite.”

She continued, “Together we need to forge a new path for positive change and reach for a new future where words of racism, systemic racism are no longer part of our actions. This is a vision that we hold dear to our hearts and let each and every one of us here today understand these words: All Indigenous people deserve safety and justice.”

Those gathered listened intently as Epp and Andrews took to the mic to eloquently share their experiences, before inviting attendees to step up and do so themselves. A handful accepted the offer, using the opportunity to encourage locals to reflect on the Indian Act, to call out racism in local Facebook groups, or to simply state that, “First Nations communities in a First World country should not live in third world conditions.”

Said Andrews during the vigil: “I have that privilege to not fear being shot dead when I open the door and see a police officer.”

He explained that organizers had invited the RCMP to attend the gathering, “to discuss the steps that they were taking to address the problem,” but there were no representatives from the local detachment who attended in an official capacity.

Epp, a shíshálh Nation member and Sixties Scoop survivor, also said organizers had invited Mount Currie Tribal Police, as well as representatives of both Lil’wat and Squamish First Nations, on whose shared territory Whistler is located, to attend. All declined, with Tribal Police citing staffing issues and local First Nations Chiefs expressing that their obligation remained with their people on the day, shared Epp.

In closing, Andrews told the crowd now is the time to act. “Silence does speak volumes, and we have to take action. We all have the information now, now it’s up to you. All I ask is two things, actually—be fearless, and be relentless,” he said. “Don’t give up.”