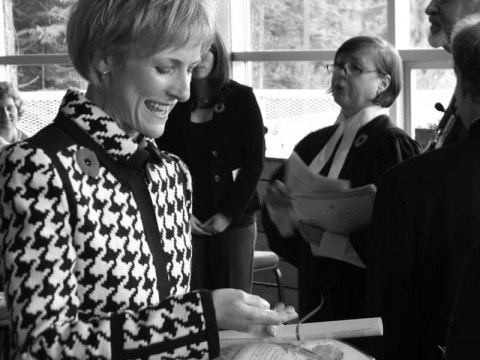 When Fiona Famulak next sings the national anthem, she'll be doing it among fellow Canadians.

The president of the Whistler Chamber of Commerce swore an oath of loyalty to the Great White North Wednesday as she and 39 others became Canadian citizens as part of the first such ceremony to be held in Whistler.

"When the Canadian flag is raised and we're singing O Canada it'll be quite emotional," she said in an interview.

The ceremony was held at the Squamish-Lil'wat Cultural Centre as part of celebrations to commemorate the 100-day countdown to the Olympic and Paralympic Games.

It was organized in conjunction with Citizenship and Immigration Canada, as well as the Resort Municipality of Whistler and the Squamish and Lil'wat First Nations.

Judge Robert Douglas Watt presided over the occasion, telling an audience of between 100 and 150 people that citizenship means three things: allegiance to Queen Elizabeth II; obeying Canadian laws; and reaching out to others.

He asked all candidates to raise their right hands, state their full names and repeat the following oath: "I affirm that I will be faithful and bear true allegiance to Her Majesty Queen Elizabeth the Second, Queen of Canada, her heirs and successors, and that I will faithfully observe the laws of Canada and fulfill my duties as a Canadian citizen."

Cynthia Stevenson Davies, an American actress known for roles on sitcoms such as Hope and Gloria and Bob starring Bob Newhart, was among those taking her oath in Whistler. She sat excitedly in the front row, grasping her son's hand and smiling widely as the judge spoke.

Candidates then picked up their citizenship cards and were greeted by dignitaries including Whistler Mayor Ken Melamed and Olympic skiing hopeful Britt Janyk. Rosie Im, owner of Sushi to Go in the Whistler Visitor Centre, wiped away tears as she greeted them.

Melamed was first to speak to them all once they received their papers. He held back tears as he recalled taking his own oath of citizenship at the age of 17. Born in Philadephia, he moved to Montreal at 13 and first came to Whistler in 1976. He called the day he got his citizenship one of the "best days" of his life.

Janyk then congratulated the new citizens and said, "I now hopefully have a few more fans."

Famulak then addressed the audience.

"The stars have aligned today," she said. "I'm so proud to be part of it, I'm so proud that I'm with 39 other new citizens, and I welcome you all, I congratulate each and every one of us, and I want to say thank you to my Whistler family and my Whistler friends, my colleagues, my roadies."

Though now officially a Canadian, she remains a proud Scot and admits she'll be torn if Scotland is in a gold medal competition with her new country.

"Although I'm British I'm also Scottish and I'm extremely proud of my Scottish heritage and I know Canada has deep roots associated with Scotland."