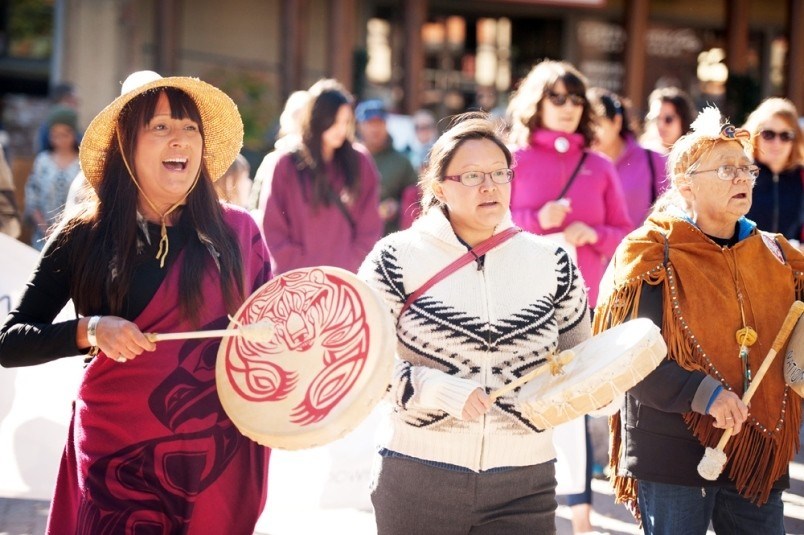 As a First Nations activist and organizer of Whistler’s Sisters in Spirit Vigil, Linda Epp has had enough conversations about race with non-Indigenous Canadians to recognize a few common patterns.

“Some people have a hard time actually talking about Indigenous issues or even talking to an Indigenous person,” she said. “People kind of lower their voice or they don’t know what to say. People are scared to actually talk. They don’t know what the appropriate word is. Indigenous? First Nations? Aboriginal? I still get that all the time. But things are developing slowly. Still, I think we could do better.”

That’s why Epp has joined long-time local Steve Andrews to organize a vigil for National Indigenous Peoples Day today, June 21, at Olympic Plaza, where she hopes to provide a platform for Sea to Sky residents of all stripes to join this long-overdue conversation.

“I think things are coming to light now because of Black Lives Matter and what’s happening south of the border, but it’s been in Canada for centuries,” she said of the systemic issues facing the nation. “Whistler has to come together as a community, Canadians have to come together, and we have to do something proactive. What are we going to do to stop this?”

Andrews initially had the idea to hold the event, which doubles as a vigil for the Indigenous Canadians who have recently lost their lives in police incidents, including 26-year-old Chantel Moore and 48-year-old Rodney Levi, who were both killed by New Brunswick RCMP in separate shootings this month.

A recent analysis of police data by CTV News found that, since 2017, an Indigenous person in Canada is 10 times more likely to have been shot and killed by a police officer than a white person.

“We’re wanting dialogue and meaningful change to come about,” Andrews said. “We’ve invited the RCMP to go. We’re not trying to bash them. We’re trying to say we need their help to change from within, and they need to address it and they need to be honest about it.”

Growing up in North Van with his backyard abutting the Capilano 5 Reserve, Andrews had a daily reminder of the stark divide between white and Indigenous Canada. He believes white Canadians—perhaps even more so in a town as privileged and as lacking in diversity as Whistler—to start speaking up in meaningful ways.

“Silence, at this point, with as much information as we have, is not neutral. Silence is being an accomplice to these injustices,” he said, adding that the real work has to start from within.

“I think the first thing is to just examine yourself and be brutally honest. Have I had bias in my life towards Indigenous people? When I go hiking at Joffre Lakes, maybe I’ll go and support their local economy instead of just breezing right through. Or maybe I’m going to volunteer or play soccer with some kids or take them biking. Do something that’s going to help this community—because it’s our community and our neighbours.”

A shíshálh Nation member and Sixties Scoop survivor, Epp wants Sunday’s vigil to be “a positive event” that leaves space for constructive dialogue.

“I understand that people may be angry and that’s valid, but that’s not what this event is about. It’s about uniting and coming together and standing and speaking and honouring the eight lives that have recently passed,” she explained.

“What are we doing in Whistler? What is Truth and Reconciliation? What is the next step? It’s great to talk the talk but now we need to walk the walk.”

The National Indigenous Peoples Day Vigil is scheduled for Olympic Plaza today beginning at noon, and will feature speeches, drumming and song.

The Squamish Lil’wat Cultural Centre is also planning a number of events to celebrate Indigenous Peoples Day this weekend, including a virtual drumming circle at 11 a.m. on June 21, followed by an art and reconciliation virtual workshop with Squamish Nation artist Cory Douglas at 2 p.m., and a live-streamed concert by Lil’wat band The Spiritual Warriors at 4 p.m.