Non-profit institute to foster dialogue between First Nations, business and government
May 4, 2016 6:00 PM By: Brandon Barrett 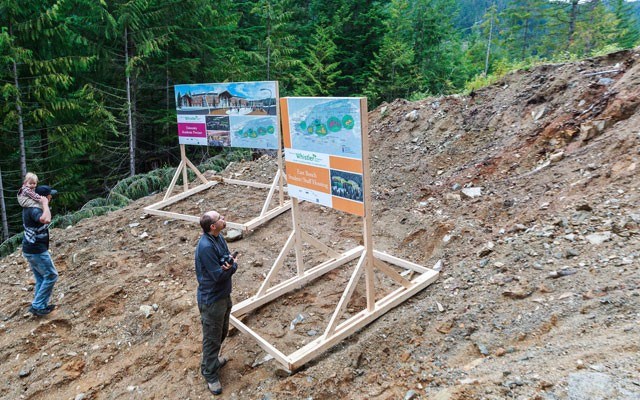 BREAKING GROUND The proponents of the Whistler International Campus have come back with a proposal for a First Nations learning centre called The Whistler Institute planned for the Zen lands, pictured. File photo

The proponents of the controversial Whistler International Campus (WIC) have come back to the table with a proposal for a First Nations learning centre planned for two parcels of land located north of Function Junction.

Details on the $34-million Whistler Institute first came to light this week, and outlined developer Giovanni Zen's vision for a non-profit aboriginal leadership centre that will foster "learning, facilitation and dialogue between First Nations, business and government."

"We can say that the concept was developed in response to the question, 'What can be done to help improve socioeconomic conditions for First Nations communities in B.C., and improve the relationship between First Nations, industry, and governments?'" said Peter Walters, consultant for the Zen family's bank holding company, Oka Holdings, in an email.

While the curriculum is still being developed, Walters expects the centre to welcome small groups of participants who will attend two- to five-day sessions throughout the year, striking a balance between leadership training for First Nations and courses on First Nations traditions and values for non-aboriginals. Walters said the centre is not intended to compete with other post-secondary institutions, offering a more "executive-oriented" experience.

Walters had no specific timetable for the project; however, construction is anticipated to take two years. He said the concept is currently being discussed with various levels of government and First Nations, although the RMOW confirmed no formal proposal has been put forward to council.

"We did have a very brief meeting with the representatives from that institute about a week or so ago, literally for a half hour, so we were surprised to then get a link (to the institute's website) sent from (Pique)," said municipal CAO Mike Furey following the council meeting on May 3. "That site is not zoned for what I understand they're proposing, so it would require rezoning, and I guess this is the latest reincarnation of what they have in mind for possible development on that site."

The proposal comes less than three years after local officials voted unanimously to quash the Zens' plans for one of the largest development projects in resort history, the sprawling Whistler International Campus. At the time, Mayor Nancy Wilhelm-Morden was wary of the "substantial risk" the project posed, calling it "a proposal to build a large commercial development."

This time around, however, plans for the 31-hectare (77-acre) site between Function Junction and Creekside that the Zen family has owned since the 1980s have been scaled back significantly. The institute calls for 7,154 square metres (77,000 sq. ft.) of built space, compared to the more than 92,900 sq. m. (1 million sq. ft.) spread over 27 buildings that were forecast for the WIC. When asked how many bed units the project may require, Walters said any accommodation built onsite would be "minimal" and designed to house participants in the centre's training programs.

But the head of the Whistler Learning Centre*, which is exploring educational tourism opportunities in the resort, believes the institute could be housed in existing community space.

"From our perspective, there's a lot of capacity here in terms of meeting spaces, whether it's the hotels... Spruce Grove, the (Whistler) Sliding Centre, Cheakamus, (the Maury Young Arts Centre)," noted Dr. Stephen Milstein. "Our vision is to build up the existing space, and if we're so lucky and so successful at filling the existing space and there is such a demand, then let's look at what the community is prepared to have and what other space we would need that would fit in with the community's vision of what we want to bring here."

The issue with using existing space, Walters countered, is that it wouldn't provide "the natural environment" nor the "sufficient unfragmented space" the Whistler Institute would require.

"Whistler's beautiful natural environment is the perfect setting for the kind of learning and dialogue proposed for The Whistler Institute," he said.

Build-out will be contained within two land parcels the Zens own at the site, steering clear of a third parcel of protected wetlands, Walters said. Local environmental group AWARE voiced opposition to any development on the sensitive area when the WIC proposal came to the fore and called for further study on potential impacts at the time.

Modelled after the renowned Alberta cultural facility The Banff Centre, Walters said the project would benefit the community in a number of ways by providing jobs for residents, enhancing Whistler's international reputation and attracting investment.

"The Whistler Institute will bring investors, governments, academics and aboriginal leaders to Whistler, who may bring family members, and who will want to return with their families and friends," he said. The organization is also lobbying the federal government for funding. "It will attract new revenue and investment to the local economy."

*An earlier version of this article referred to the Whistler Learning Centre by its previous title, the Whistler Education Group.