Whistler joins national Walk for Alzheimer's on May 5

Annual fundraiser to honour Jane Burrows, and Chantel Jackson and her mom, Linda Lerohl
Apr 29, 2019 6:30 AM By: Brandon Barrett 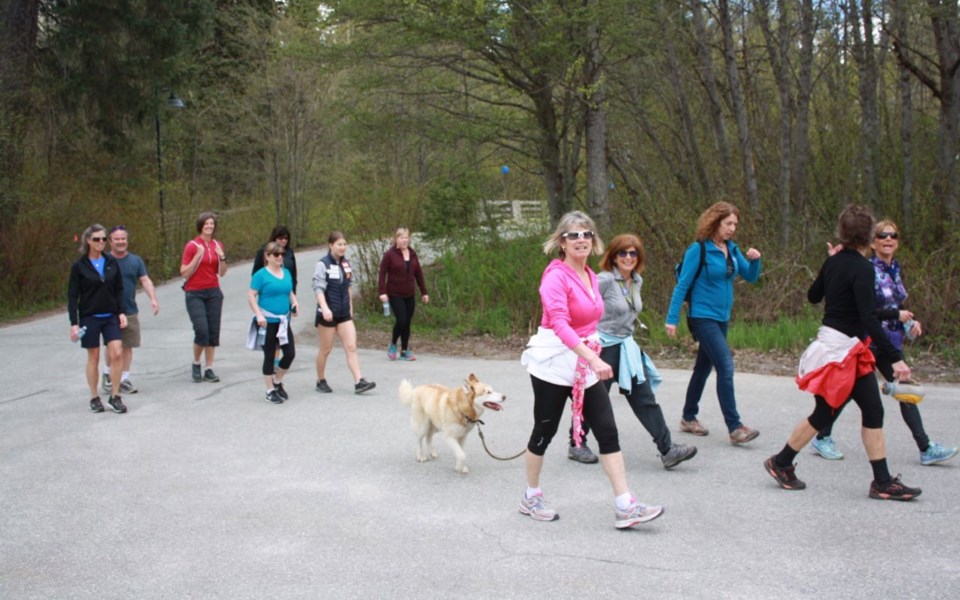 WALK FOR A CURE Participants in Whistler 2018 Walk for Alzheimer's. This year's fundraiser returns on May 5. File photo

Erika Durlacher knows how difficult it can be to live with Alzheimer's.

She was there at every step of the way as her husband, Peter, battled the neurodegenerative disease until his passing in 2016. That meant driving on the Sea to Sky Highway for medical appointments three times a week, helping Peter move around the community in a wheelchair as his mobility deteriorated, and watching the man she loved slip further away towards the end of his life.

Now she's turned her efforts to organizing Whistler's Walk for Alzheimer's, the second year the fundraiser has been held locally—and the first under the Walk for Alzheimer's national umbrella. Last year's Whistler walk raised close to $11,000, and more than $5 million was raised nation-wide.

Ultimately, Durlacher wants to raise awareness and break down stigma for the more than 747,000 Canadians living with Alzheimer's or another form of dementia.

"It's not something to hide your head and bury it in the ground about," Durlacher said. "If you have it, you have it and you can make the best of it. There are ways to still ... have as good a quality of life as you can with the disease."

Although improvements have been made, Durlacher believes Whistler could be better equipped to support those with dementia.

"I'm hoping by setting up these walks and showing that the community is interested in making our community more dementia-friendly, we will get more support here and have more programs and provisions," she said, noting how a support group for family of those with Alzheimer's that used to run at the Whistler Health Care Centre was shut down several years ago due to a lack of attendees. Durlacher believes that Whistler's growing population could accommodate the group's re-launch.

"I think we're ready for that now," she said.

Bruce Stewart, GM of event sponsor Nesters Market, has his own personal connection to dementia, specifically a form known as frontotemporal dementia, which claimed the life of his mother last year.

He spoke about the pain of watching his mother's cognitive abilities diminish near the end.

"Her disease was more cognitive, so she wouldn't recognize people, time of day, places, things, and you couldn't have a discussion with her about, really, anything," he recalled. "It was hard as a family to go see your mother and your mother's not there, really, because she doesn't recognize you—at least for the first five, 10 minutes."

Before her passing, Stewart's mother took part in a clinical study at UBC's Djavad Mowafaghian Centre for Brain Health aimed at identifying faulty genes that cause dementia and are sometimes passed down in families. Her autopsy confirmed the genetic mutation, putting Stewart and his sister at risk of inheriting the gene.

Stewart and his sister have since joined the UBC study, and now face the dilemma of whether to determine if they carry the gene. "Is it important for me to know that I have it, or do I just live a healthy lifestyle and hope that even if I have it, the gene never turns on?" he said. "More important to me are my kids. If I get tested and I don't have it, then great, they will never get it. That would be a weight off my thought process."

This year's walk will honour Whistlerites Jane Burrows, and Chantel Jackson and her mom, Linda Lerohl. Part of the first cohort of teachers to work at Myrtle Philip Community School, and the co-founder, alongside her husband Paul, of the now-shutteredWhistler Question newspaper, Jane died in December after a long battle with Alzheimer's.

Jackson, meanwhile, is a registered nurse whose mother was diagnoses with early-onset Alzheimer's 10 years ago. A registered nurse herself for more than three decades, Lerohl has been living in an Albertan care facility for the past four years. Jackson also organized the Alzheimer's support group that previously ran in the community.

Whistler's Walk for Alzheimer's sets off on May 5 at 10:30 a.m. from Our Lady of the Mountains Catholic Church. Durlacher encourages participants to form teams and dress up in costumes. Donations can be made in-person on the day, or online at alzgiving.ca. Funds raised will go to the Alzheimer's Society of B.C.