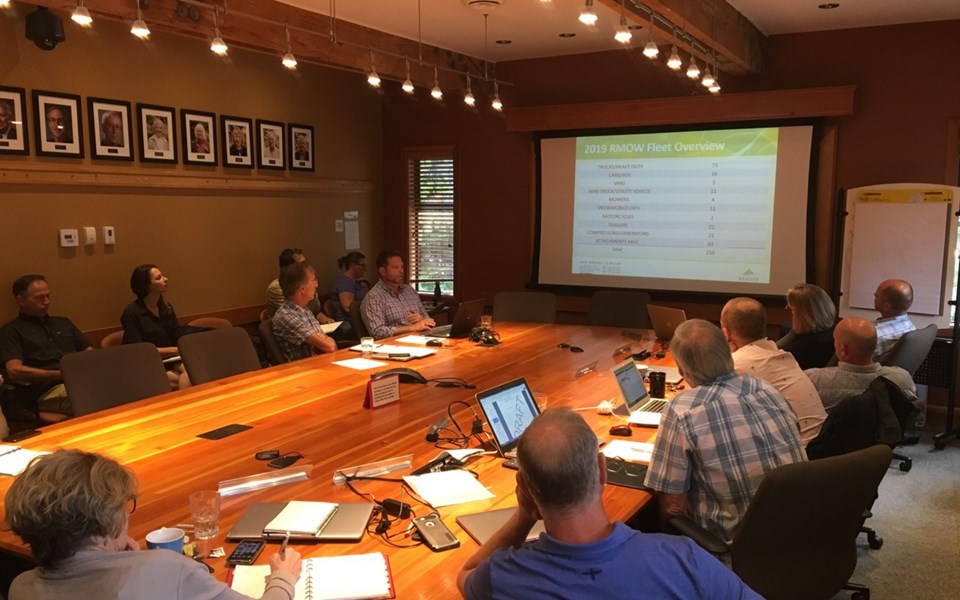 FLEET MANAGEMENT Central services supervisor Paul Klein provides an update on the Resort Municipality of Whistler's vehicle fleet at the Aug. 13 Committee of the Whole meeting. Photo by Braden Dupuis

While the Resort Municipality of Whistler (RMOW) remains focused on lowering its emissions, the technology isn't quite there to facilitate a wholesale change in the municipal vehicle fleet.

Of 250 total pieces of equipment in the RMOW fleet, only 10 run on alternative fuels, while a further 32 per cent of the fleet could be switched to electric today.

"If we were to replace everything tomorrow, that we could, with electric or hybrid vehicles, we could replace up to 31 total," said central services supervisor Paul Klein, in a presentation to the Committee of the Whole on August 13.

The RMOW needs to be sure of the reliability of new technology as it sources new vehicles—which has been a challenge in the past for many municipalities, including Whistler, Klein said.

"We've brought in equipment at the front of industry ... all excited that we've got this great piece of electric equipment, and then found out that it doesn't do the job, we don't have the infrastructure. It's a challenge," he said.

"So we've learned from those, and look to do a lot more investigation before we make that purchase."

The vehicle replacement planning process starts in August, and includes a detailed review of all "replacement candidates," Klein said.

"We're looking for that optimum economic point of replacement," he said.

"So just before that vehicle starts costing us too much, but at the same time holding some of that residual value, so when we do auction it we're getting something back."

The RMOW has three options for vehicles nearing the end of their lifespan: defer, replace or repurpose (like in the case of a 2011 F150 crew cab, which was repurposed last year to be used by Whistler's FireSmart crew).

"We thought this was a great idea to try and just put this off for another year, and let (FireSmart) have it," Klein said.

"So it deferred FireSmart from having to purchase a brand new vehicle, and it also provided them something to get around town in, and it's been completely reliable so far this year."

"Our major consumption is done in the winter, so it really is dependent on our climate how much we burn," Klein said.

"We've had a couple of pretty good winters, so I think we've done a good job of mandating that we reduce how much we're idling vehicles, where we're using them, how we're using them ... so I think efficiencies are being gained as well."

"The more that we bring on these alternative fuel vehicles, we start to see those numbers get affected, but it's going to take some time with numbers that big, and the pieces of equipment that we're able to change," Klein said.

"Fleet management is one of the largest costs to any organization, so a fiscal responsibility, training, planning, and an eye on advancing technology paves the way to success for this program."

The cross connection control bylaw, as it's called, builds on a municipal program of the same name first introduced in 2013.

Through its cross connection control program, the RMOW has achieved 90 per cent compliance from the community, said engineering technologist Luke O'Beirne-Kelly, in a presentation to council.

"It's highly unlikely we'll get to that 100-per-cent level unless we have a bylaw in place that provides additional incentive for consumers to put in the forward planning and budgeting required to get these more complex instalments put in place," O'Beirne-Kelly said.

The bylaw prohibits anyone from creating a cross connection that could contaminate the water system; requires the consumer to control every cross connection on a premises or facility; and requires approved backflow prevention assemblies to be inspected and tested at least once every 12 months.

"Essentially it allows us to enforce our cross connection control program," O'Beirne-Kelly said, adding that the bylaw will be implemented in a phased approach to address high-risk hazards first.

"It also gives us the ability to work with consumers who are facing forward planning and budgeting constraints to make an agreed timeline for when they can have this installed."

While the bylaw only concerns industrial, commercial and institutional facilities, residential properties may be considered down the line.

Council approved Development Variance Permits for electronic signs at three Whistler Blackcomb (WB) locations at its Aug. 13 meeting: one each at Skier's Plaza, in the Upper Village and at Creekside.

"The proposed sign design is essentially three sections of LED display that would be combined and housed in a black steel framework," said planning analyst Tracy Napier in a presentation to council.

"The total dimensions are about 2.8 metres wide by 32 centimetres high, which means a total screen area of less than one square metre."

Electronic projection signs, defined as those projected from an electronically modulated optical device such as a liquid crystal projector onto any surface in view of the general public, are prohibited in Whistler.

The WB signs will operate from 6:30 a.m. to 5:30 p.m., and will display information about weather conditions and lift status to guests.

"We didn't find that there would be any negative impacts from the proposed signs, as they will only operate in the daytime, they will only display static text information, the information would be only related to safety and advisories related to on-hill conditions, and they'll have no advertisements or moving imagery of any kind," Napier said.

"So to have the capacity to communicate to our guests to the minute on what is happening is very helpful and appreciated."